People please WAKE UP!!!  This worker did NOT have a heart attack and die on the spot from the weather, as the media claim.  The other two workers who were too weak to climb down were not weakened by the weather either.  THEY WERE MICROWAVED — and one worker is now dead from the radiation and the others are sure to become very seriously ill from exposure to this noxious energy.  Microwave radiation is well-known to cause heart disturbances.  Even 10-year-old children have dropped dead from cardiac arrest in a Canadian school with wifi.  Two others also collapsed from cardiac arrest but were revived.  ALL OF US ARE ALSO BEING EXPOSED TO THIS ENERGY THROUGH WIRELESS DEVICES.  WE MUST LET THEM GO!!!!  When the telecom companies flip the switch and turn on all the 5G devices (some of which sit directly outside your bedroom window on telephone poles), people are going to become ill and die very quickly  This is no joke.  You and your children are in grave danger and it is time to awaken to this Truth.

It is extremely distressing to witness the hideousness of what is happening all around us.  This summer, I have seen only approximately one dozen butterflies and the same number of honeybees (I live on Long Island).  Crickets usually abound at this time of year and overrun my garage and basement.  However, I have seen only ONE cricket in my basement this entire summer.  Cicadas and spiders have gone sadly missing too.  Flowers, plants and trees are having a very hard time.  Kittens in my neighborhood (from several different litters) are dying because they were born with genetic defects that prevent them from reaching adulthood.  These genetic defects are due to defects in the sperm and/or egg of the parent cats and are, no doubt, being caused by the radiation in the environment.  This radiation is coming from everyone’s wireless devices including cell phones, cordless phones, wifi routers, smart TVs, smart appliances, bluetooth devices, baby monitors, and more.  The radiation is also coming from the telephone lines which now have many additional devices placed upon the poles that are irradiating us 24/7.

All living things are being affected by this radiation and most people are experiencing at least one or two symptoms of radiation sickness but they have not put the pieces together to understand what is causing their issues.

Below is a diagram showing the signs of radiation sickness.  Do you or any of your loved ones have any of these symptoms? 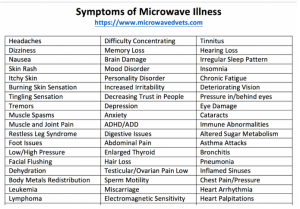 Please pay attention to this issue.   Your wireless devices are very, very dangerous.  They are a trap and are being used as weapons to effectuate the greatest genocide this world has ever known.  Just look at the Deagle forecast for America’s population in 2025. 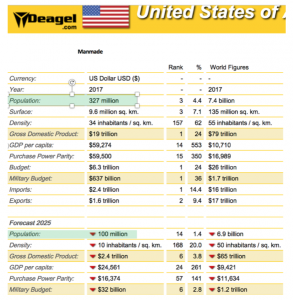 Do you see that they are expecting more than 2/3 of the American people to be dead by 2025?  Can you comprehend the evil behind their plans?

Perhaps you have unconsciously chosen to die rather than deal with what is about to happen.  Perhaps death is not a bad choice at this point.  But damn! — if you DO want to live and you want your children to live — and if you do notwant to participate in, or be responsible for, the millions of deaths of insects, birds, animals, plants, trees, etc., THEN PLEASE LET GO OF THE WIRELESS DEVICES NOW.

This information is just so incredibly disturbing and yet people need to know what is happening.  The poor men on this water tower were there to clean the tower.  They probably had no idea how dangerous these microwave transmitters are.  And now one of them is dead.  Microwaves are well known to cause heart attacks, especially PULSED microwaves such as those being emitted by your cell phones, cordless phones, wifi routers, smart meters, smart TVs, bluetooth devices, baby monitors, etc.  And the transmitters on that tower look like they are 5G transmitters.   Very, very dangerous.

Notice how the article below does not even MENTION the microwave transmitters all over the water tower!!!   Instead, they blame “solar rays”  for being stronger on top of the tower, causing heating, completely ignoring the fact that MICROWAVES COOK THINGS, including humans!  And that the water in that tower was being IRRADIATED and probably boiling.

They are such liars and the cover-up regarding what this radiation is doing is extreme.  It’s absolutely outrageous.  I am about to publish another book on this topic.  If you would like to receive updates from me about my forthcoming book, please sign up on this website to be added to my mailing list.

Please share this information to help people wake up.  It is urgent that people understand the facts.

A day of regular maintenance on top of a water tower in Fresno, California, turned into an emergency rescue mission after sweltering conditions caused a worker’s heart to stop and forced the rescue of two other men on Wednesday. The three workers were performing a scheduled inspection at the water tower on the campus of Fresno State University.

Temperatures reached a high of 103 F in Fresno on Wednesday, the fifth time in the last six days the temperature topped triple digits. Conditions have steadily remained 5-10 degrees warmer than historical averages this week.

While conditions were somewhat cooler in the morning, when the men were rescued, the air was still hot enough to present a considerable risk.

“Temperatures soared to 90 between 10 a.m. and 11 a.m., with an AccuWeather RealFeel near 100,” AccuWeather Senior Meteorologist Dave Houk said.

The three employees were rescued by Fresno Fire Department firefighters around 10:30 a.m., local time, and one of the men was rushed to the hospital with apparent heat exhaustion.

Fresno Fire spokesman said the crew member’s heart had stopped and emergency workers needed to revive the man in an ambulance on the way to the hospital, according to The Fresno Bee.

The fire department added that crews had to remove the other two workers from the tower as well, as they were not conditioned to climb the 130 feet down on their own.

The original ladder truck called in for the rescue came up 15 feet short of the catwalk where the workers were stranded, so the crew had to lower a hauling system to the tower to bring the men down.