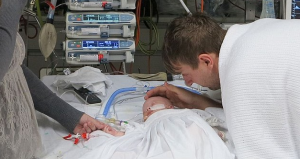 A Perth woman is the new mouthpiece for giving pertussis vaccinations to pregnant women. According to her claim, her not doing this is the reason her infant succumb to death. And in order to propel her advocacy over the issue into a new space, she’s released the video of her infant’s last moments. She also released a steady supply of images on social media.

Her claims over this matter are ill-founded, no matter how sad and destitute her situation remains (no one should ever experience the death of a baby). The woman, Catherine Hughes, and husband Greg took to social media, posting a video of the baby essentially dying to promote pertussis vaccines during pregnancy.

‘If you haven’t been immunised against whooping cough (pertussis) please consider getting it done. Heartbreaking to watch 4 week old Riley struggle with it at PMH please keep him in your thoughts!,’ she wrote.

‘If you’re anti-immunisation/anti-logic/anti-duty of care to your society as a whole, then feel free to take a look at this picture of my son in hospital right now at 4 weeks old with whooping cough – and then come and tell me how you think immunisation is a bad thing,’ Greg added.

On March 17 she posted this message.

‘We are devastated to let everyone know our gorgeous sweet month-old son Riley John Hughes lost his battle with whooping cough at Princess Margaret Hospital earlier today,’ she wrote.

‘He passed away peacefully in our arms after a tough fight. The staff at PMH were amazing and did everything they could to save his little life but the whooping cough was too severe. RIP Riley. Forever in our hearts.’

Whether you vaccinate or choose not to vaccinate, you don’t deserve to lose your baby. But in this case, emotions have led a couple astray from facts. There is hardly any existing science which shows that giving a pertussis vaccine to a pregnant woman is healthy or effective. This baby’s death is incredibly sad, but now the situation is even more, dismal because the baby’s death is being used as pharmaceutical company propaganda. This isn’t something which should have been posted and at the end of the day, it is irresponsible on the part of the parents. I, of course, feel bad for them, I don’t care if they agree with me on vaccines, I love all people, but I am disheartened that this baby’s death is being used in such a pathetic way. Pregnant women are being pushed vaccines more and more these days for hardly any good reasons other than lining the pockets of pharmaceutical companies.

Instead of cherishing the baby’s short life, we are all now put in the position of debating and politicizing its life. That’s a dreary position to put everyone in. And really, was this a public moment? So many considerations should have been made before determining this was the appropriate move. This also is an insult to the thousands of families a year who endure the loss of children because of vaccine injuries: injuries which go largely ignored by the mainstream media. I hope this doesn’t turn out to be a woman who is attempting to garner fame and acceptance through tragedy. I realize how awful it sounds for me to say such a thing, but the truth is, it has crossed my mind.

I can’t tell you, Catherine, how much I hope that this is just your understandably emotional reaction to your tragedy. I hope more than anything it is nothing ulterior or self-promoting. Whether you believe in vaccination or not, I see you and all of us on the same team: we want our children to thrive. But simplifying the vaccine issue in the way that you have amounts to irresponsible conjecture and fallacy. We aren’t all total anti-vaccination in every way. We don’t all only worry about autism. The matter is complex and exist in layers and your advocacy has disregarded all that. You’ve painted us all with one broad stroke. You’ve bought into the machine that is pharmaceutical corporations.

I hope that one day you can see this light.