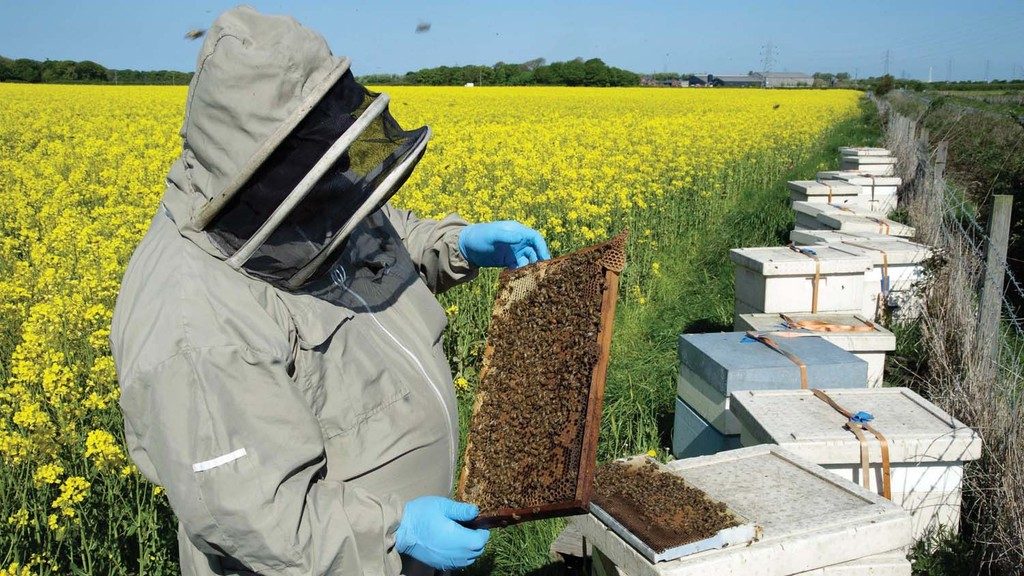 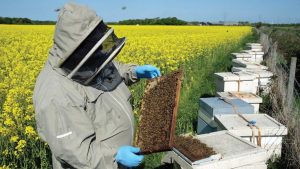 A new study published on Wednesday in the journal Proceedings of the Royal Society B has found that a class of insecticides known as neonicotinoids do not kill drone honey bees, but instead drastically reduce the amount of live sperm produced by the male population. Researchers at Switzerland’s University of Bern found that the bees who ate pollen treated with neonicotinoids produced 39 percent less live sperm than the bees who did not eat the treated pollen.

It essentially acted as an accidental contraceptive on the drones, whose main job is to mate with the queen – but not one that prevented complete reproduction, just making it tougher, said Lars Straub, lead author of the study and a doctoral student and researcher at the University of Bern. Drones, which are the product of unfertilized eggs, don’t gather nectar or pollen and don’t sting; they die after mating.

While the drone bees that ate the treated pollen did not produce a different amount of sperm than those who were not exposed, they did produce less living sperm. The bees who were untreated produced an average 1.98 million living sperm, while the bees with neonicotinoids in their food produced about 1.2 million. Straub told the AP that the big question regarding the new findings is whether there is still enough sperm to do the job of mating with the queen.

Neonicotinoid-maker Bayer Crop Science spokesman Jeffrey Donald told the AP that Bayer’s scientists will review the study, but they believe “artificial exposure to pesticides under lab conditions is not reflective of real-world experience.”

The controversial “neonics” are a class of pesticide that has previously been linked to declines in bee populations. Neonics were developed in 1991 and commercial use began in the mid-1990s. Around 2006, commercial beekeepers began reporting what is now known as colony collapse disorder — where entire colonies of bees die off with no obvious cause. The disorder has been reported in commercial colonies all over the world. Several studies have implicated neonics, which are used to kill insects harmful to crops.

The decision came shortly after Maryland passed legislation banning the sale of neonicotinoids. The bill prohibits the retail sale and household use of neonicotinoid pesticides beginning in 2018, but would still allow commercial uses.

“I am not convinced that neonics are a major driver of colony loss,” Dennis vanEngelsdorp, University of Maryland entomologist, told the AP.  VanEngelsdorp did tell the AP he believes farmers are relying too heavily on the pesticides “against pests that are simply very scarce or not found in the landscape. There are studies (including EPA’s) that show no benefit to production when these products are used.”

Neonicotinoids have also been the subject of a recent whistleblower complaint filed by a researcher with the U.S. Department of Agriculture. United States Department of Agriculture researcher Dr. Jonathan Lundgren filed an internal complaint in September 2014 accusing the USDA of retaliating against him in response to his neonicotinoids research. The complaint was dismissed by the USDA and Lundgren was suspended in October 2014. The West Field Times reports that the USDA said Lundgren was suspended for three days after USDA investigators found emails among his research staff that included indecent jokes.

On October 28, 2015, Lundgren filed a complaint with the federal Merit Systems Protection Board after his supervisors allegedly began to “impede or deter his research and resultant publications.” Lundgren’s complaint alleges that his supervisors suspended him in retaliation for his research on neonicotinoid pesticides and also calls for an investigation of both the USDA and the EPA. Lundgren’s complaint is now moving forward and will hopefully provide some more insight into the possible dangers of the neonicotinoids.

Back in September 2015, a federal appeals court dealt a huge blow to the pesticide industry by issuing a ruling that blocks the use of a controversial pesticide believed to be causing harm to honey bees. The 9th U.S. Circuit Court of Appeals found that the U.S. Environmental Protection Agency (EPA) insufficiently tested the pesticide sulfoxaflor before approving its use in 2013. Sulfoxaflor is a type of insecticide known as neonicotinoids, or neonics, which are used on citrus and cotton crops. Circuit Judge Mary Schroeder stated the EPA should have done further research once initial studies showed sulfoxaflor was highly toxic to honey bees.

What are your thoughts on the use of insecticides and pesticides at large? Have we become too dependent on food production systems which are in turn dependent on the use of chemicals which harm the environment, the animals, and humans?

Derrick Broze is an investigative journalist and liberty activist. He is the Lead Investigative Reporter for ActivistPost.com and the founder of the TheConsciousResistance.com. Follow him on Twitter. Derrick is the author of two books: The Conscious Resistance: Reflections on Anarchy and Spirituality and Finding Freedom in an Age of Confusion.