The event has been labelled fake, after it was revealed that the current U.S. President was filmed receiving a third Pfizer vaccine shot on a set designed to look like the White House. 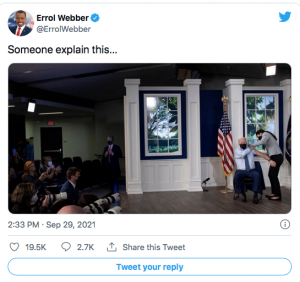 Calling the current administration, the “Biden show,” a conservative website run by African-American, Wayne Dupree, observed: “Many people thought it was either a staged PR event involving saline solution, or he really took the booster and is now in big trouble.”

Trying to make sense of speculation surrounding both the fake White House set, and Biden’s alleged absence, the article stated that the President had postponed a visit to Chicago “to give remarks on COVID-19 vaccine mandates for businesses.”

The White House explained the delayed visit was in order to help the President push the administration’s planned legislation “(two bills worth $4.7 trillion dollars) over the finish line in the House of Representatives.”

Claiming to be “following the science”, Biden accused vaccine hesitant Americans of “causing a lot of damage to the rest of the country.”

The President seemed oblivious of the contradiction between “opening America safely”, and the open borders humanitarian crisis his administration created on the southern border.

The Democrat president asserted that he won’t let America return to normal until 97% of the country are “vaccinated.”

The current number is between 56.4% and 58.9%, and the number on which science says a nation reaches herd immunity is 80%.

Christianity Daily quoted former FDA Commissioner Scott Gottlieb telling “CNBC that up to 90% of Americans may already have some sort of COVID immunity by the time the Delta wave is over.”

They added, “Gottlieb indicated his belief that the COVID pandemic will soon end, even without a need for Biden’s vaccine mandate.”

Reasons for a third COVID shot are elusive.

The primary justifications include concerns over the “delta variant” and waning “effectiveness” of the initial two jabs.

An FDA committee, in September, voted 16 to 2 against a Pfizer boosterfor the all Americans. A follow-up vote, unanimously approved the booster for Americans aged over 65.

Fair criticisms of Biden’s wobbly vaccine mandates extend to the prioritising of the Pfizer booster.

Concerns have been raised over whether those with the Moderna and Johnson & Johnson variants will be exempt from Biden’s forced medical conscription mandates. Boosters for both are yet to be approved.

If Israel is the standard on the “safe and effective” “vaccines”, then the term “fully vaccinated” only applies to those who’ve received their third, and potentially fourth COVID-19 shots.

CNBC said, “Roughly 60 million of the 100 million Americans who originally received the Pfizer-BioNTech Covid vaccine are now eligible for a third shot.”

Of importance, CNBC also noted, “Some scientists, including at least two at the FDA, had said they weren’t entirely convinced every American who has received the Pfizer vaccine needed extra doses at this time.”

To restate one Twitter user, whose response summed up the majority of the fall-out from the mock White House scene: Remember, “These are the people who want us to trust them.”