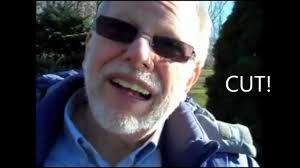 Up until now, many feel the Take the Cake award for worst staged-deception actor has gone to Gene Rosen at Sandy Hook — or at least his performance is the most well known and can be viewed in the following clip. Watch him rehearse and mess up his lines.

The Manchester Arena “bombing” has brought forth a new candidate for the Take the Cake award: a C-team performer, one Nick Bickerstaff. U.K. publication The Sun has the “story”of how this man was 25 feet from the foyer blast. Then unscathed, we are treated with the preposterous spectacle of him roaming about calling out for his daughter, Ellen. Incredibly, in an insult to our intelligence, he decided to record the whole act — but without catching any visual whatsoever of the foyer carnage. Also, examine the implausible scene around this man as he wanders about.

But first, The Sun article treats us to yet more cartoon-world physics, as Bickerstaff claims, “There were body parts on the floor to my right. I had heard them dropping with a dull squelching noise, not instantly realizing what the sound was.”

Apparently, one must believe this was an artillery shell, not an improvised shrapnel device. According to the Sun, 16 year “Ellen” survived but now requires four hugs and kisses every time she leaves the house. Here is the completely ridiculous scene.

Other Take the Cake actors include this fun loving girl who was shot in the butt at Bataclan in Paris and then granted this absurd interview sitting comfortably in her chair, laughing with duping delight a few days later.

Watch this short clip from the Orlando Pulse shooting. This was broadcast on Fox News. You will see three men parade by the camera. The man in the red shoes is tourniqueted from some sort of “injury”. The crew files past the camera and then place Mr. Red Shoe down on the sidewalk. You can see his red shoe planted on terra firma.

The New Nationalist (TNN) will examine the next case, Roanoke, in more detail. Greta Van Sustren’s interview with Vicki Gardner takes the cake for chutzpah, even for an arch-hoax that is best of class for insulting your intelligence. Gardner is the Chamber of Commerce lady who survived a shot in the back with a hollow-point bullet. Gardner’s husband, Tim, told the Associated Press that during surgery, and while in a medically induced coma, doctors had to remove her damaged kidney and part of her colon. The following video demonstrates the effect of a Glock hollow-point bullet upon exit.

Now, a mere week after taking a round, this 62-year-old woman shows up for a Fox “News” appearing no worse for the wear. At minute 9:55, she looks tan with a great complexion, a good range of motion and nicely trimmed down.

It hardly looks like the same woman — in fact, much healthier looking than before — and far from being someone hospitalized with a hollow-point bullet wound. Instead, she’s already been living the good life.

As Gardner gets into her storytelling, she is so far off kilter that Greta starts looking visibly annoyed, as if to say to her handlers, “You have me out here acting with this clown?”

From 8:55, Greta has to take over and lead the whole script. Bad casting. How long will it take until the Crime Syndicate “suicides” and quickly cremates this woman so that no further interviews can be given or questions asked. Note at 14:10 a recap of numerous duping delights throughout.

At 0:45, “Alison was alongside of me and we saw a motion …” Uh, we? How would she know what the “dead” newswoman saw? She repeats “we” three times.

At 4:55, two police officers arrive after shooting. One asks her if she can “get up.” Do police immediately ask shooting victims if they can get up? That’s the protocol? Gardner claims to have gotten up under her own power, hollow point-bullet wound and all.

At 5:10, she states, “I went into a truck.” Police officers drive around in trucks?

At 8:38, Gardner says she “believes” he came back and shot her. The word “believe” in English is defined as “tosuppose or assume.” What an odd word choice to describe one of the most memorable moments of one’s life.

At 7:45, Gardner says Adam was shot first. No, Vicki, you badly missed your lines on that one. The shooter fired at least a half dozen shots at arch-fraudster Alison Parker first, that was well established. See the side-by-side shooting video. First, a 300-pound black shooter wearing body armor and a video cam walks up undetected, then he misses at least four close-range point-blank shots at Parker. And now comes this revealing Gardner interview. Here is the original Fox News video just in case Peekay’s analysis video below gets scrubbed.

At 9:47, Gardner gestures and says that she had two people next to her bleeding to death. But according to the video, Alison took off running down the boardwalk away from them.

At 13:00, she said, “I knew he was shooting the others in the head.” How would she know this? Parker was at the end of the passageway and Gardner was “playing dead.” She never addresses the actions of Adam Ward at all.

After being shot in the back, she was able to continue playing dead. What fortitude! What super-human strength! What fraud!

For more shocking revelations, listen to this hour-long interview with Keli Kohlmeier, the closest neighbor to the whole incident. It is disjointed in the beginning as Kohlmeier (a real eyewitness) feels out the interviewer; but then, wow, so stay with it as she is awakened to the trickery.

See “Roanoke Shooting Part I: If You Believed This, You’ll Believe Anything.”

This article originally appeared on The New Nationalist and was republished here with permission.