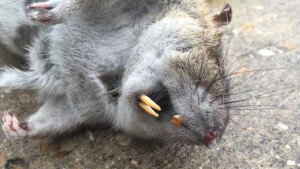 THESE pictures reveal a new breed of super rat has emerged, after a giant rodent was discovered at a private property in the UK.

The huge creature measuring 60 centimetres was caught by S.W.A.T Total Pest Control in Grimsby after one of their technicians, Spencer Harris, was called to a house to deal with reports of vermin running across the patio.

Despite a recent surge in “fake” pictures of giant rats, S.W.A.T’s Jeff Sullivan said this beast was the “real deal” amid fears that a “plague” of super rats could develop due to a mild winter.

“A lot of people take photos of rats at various angles to make it look larger than it actually is, but this is exactly as you see it,” Mr Sullivan said.

“I have been doing pest control for a considerable amount of time and this is the biggest we have ever caught.

“You read and hear so many stories about super rats but we could not believe this one.”

Based in Skegness, Lincs., S.W.A.T Pest Control confirmed it has definitely seen a trend of larger rodents appearing.

“Rats definitely seem to be getting bigger and it is worrying that they are getting this large,” Mr Sullivan said.

“A dog is not going to take them on. I’d certainly be concerned if my dog came face to face with that rat. And if there is one male rat of that size, there will be a female one too.”

The rat was recently caught at a house in Humberston, North East Lincs. Mr Sullivan said he believed it had a “free run” eating very high protein food.

“Another key factor is rats like eating a lot of maize products, as they are enriched with vitamin K which works as an antidote to rat poison,” he said.

“Maize is often grown in fields which makes sense in this instance. It’s the size of the teeth that are a concern as well.”

He said the size of the rat was unusual.

“I just take this as a day-to-day job but every now and then you get something unusual and this is a very large rat,” he said.

“You hear a lot of stories – fishermen’s tales if you will, people saying it’s bigger than their dog and that sort of thing – but we trapped this and we caught it.

A spokesperson for North East Lincolnshire Council, who no longer provide pest control, advised anyone with concerns about rats or other vermin to contact a reputable pest control service.