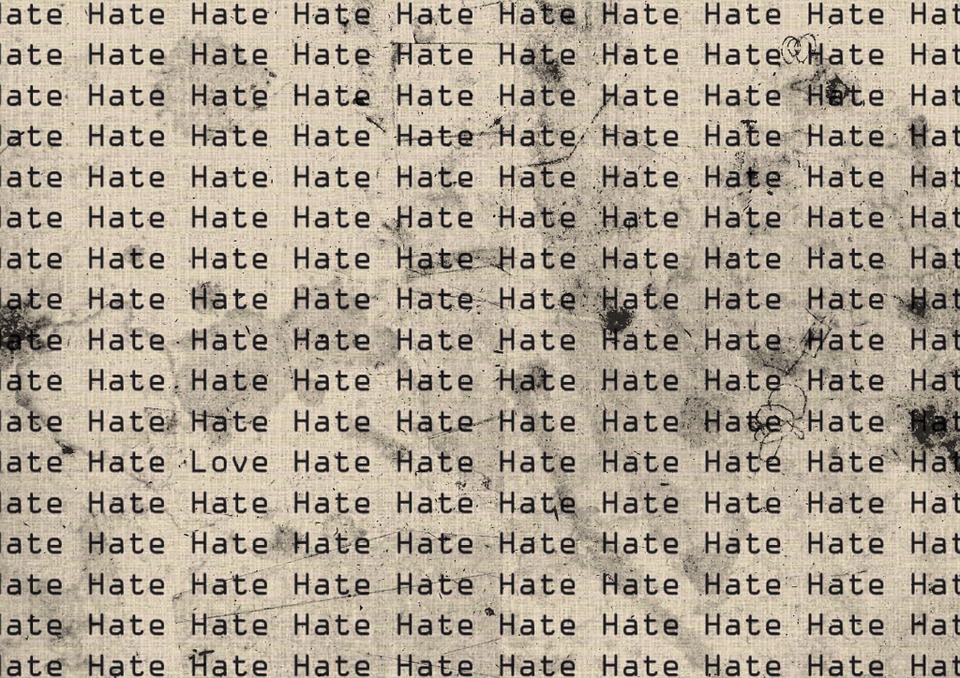 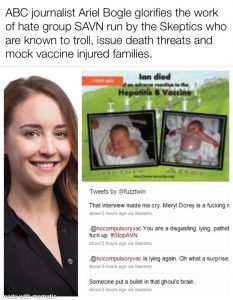 AVN: Advocates for vaccine safety and informed choice since 1994

ABC Radio glorifies abuse of parents whose families have been injured by vaccines. This is disgusting! Please listen, share and everyone needs to write to the program to share your stories. Don’t wait for the AVN to do it – we need your help! cc your message to avnenquiries@avn.org.au

Some Australians have taken it upon themselves to combat the messages of the anti-vaccination community on Facebook, where it still thrives.

Who are the super heroes fighting the health freedom community on Facebook & who is Ariel Bogle really glorifying? see video below for more info on the hate group that the ABC are promoting. Are you seriously willing to take vaccination advise from these skeptic thugs? In an attempt to avoid responsibility for those tweets, Christine Bayne made her tweets private for that Twitter account shortly after she posted them in 2010.  Her main Twitter handle currently is @DilutedThinking but there are others.

It is always a great source of amusement when the deceptively named Australian Skeptics hands out awards to its own for seriously questionable, if not, downright illegal activity, and let’s be honest; it’s not as if one would list this award on one’s CV.

The award seems to be reserved for the most repugnant of a repugnant lot.

Dr. John Cunningham, a long time member of hate group, Stop the Australian Vaccination Network, was, quite ironically, awarded the 2017 Thornett Award for the Promotion of Reason. Trust Me I’m a Doctor and Voice of Reason – Dr. John Cunningham

Previous winners of the Thornett Award include none other than Victorian Health Minister Jill Hennessy (2016), Catherine and Greg Hughes (Light for Riley) (2015), and Toni and David McCaffery (2009).

Readers may recall that, earlier this year, the Murdoch media reported that Cunningham had attempted to coerce Village Cinemas in Melbourne into breaching its contract with the AVN, using financial inducements, after cinema management had refused to buckle under the weight of heavy mobbing and bullying from Cunningham and other fanatical sceptics.  Nice promotion of reason do

The “Skeptics” Are An Organized “Hate Group”

Sometimes it is just best to start out by quoting the original story.  Like just below.  I will link you to the whole article, but, first, here is the gist of it:

“On August 12, 2012, 6 (six) phone calls were received by Meryl Dorey, President of the Australian Vaccination Network. These calls were made between approximately 2:15 and 3:30 that morning. Attached are recordings of two out of six of these calls  (please listen to “Die in a Fire”and “Just burn” at these links). As you listen, please keep in mind that making calls such as these is considered to be  a criminal act under current Australian legislation.

Nothing at all.  They are all about “hate.”

HOW MEDIA AND BIG BUSINESS MANIPULATE YOU!

AS A PARENT ARE YOU AWARE THAT…

° Media personalities and parent information sites are being used by big pharma to make you buy their products, including vaccines?

Abuse by members of SAVN and the Australian Skeptics

Liz Hempel is the mother of a vaccine-injured child. Peter Bowditch is a past-president of the NSW Skeptics and a moderator on the Stop the AVN Facebook Page. He has a long history of being quite unapologetic about his abusive treatment of those he disagrees with. His interactions with Ms Hempel, however, is beyond the pale.

MAINSTREAM JOURNALISM HAS BEEN REDUCED TO INDUSTRY MARKETING.