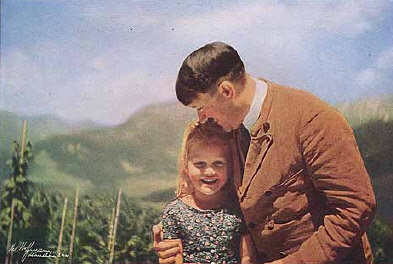 WE ALL KNOW about the evil Adolf Hitler, don’t we? Well no, actually, we don’t—as a recent exhaustive documentary by UK filmmaker Dennis Wise amply demonstrates.
Since the mid-20th century, the world has only ever been told one side of an incredible story.  The story of a boy from an ordinary family whose ambition it was to become an artist, but who instead became a drifter…

His destiny however was not to slip into the awaiting oblivion, but to rise to the greatest heights of power, eventually becoming one of the most influential—and maligned—men who ever lived. Could it be that the real Adolf Hitler was actually a compassionate visionary, a much-loved hero to his people, who’s only “crime” was to stand up to the evil, anti-human cancer of World Jewry—a cancer that afflicts our planet to this day..? | More: Hitler Never Used Term “Master Race”

“There will come a day, when all the lies will collapse under their own
weight, and truth will again triumph.”—Joseph Goebbels

“The Greatest Story Never Told” provides the viewer with a rich visual and oral history of Germany’s role in World War II, with a central focus on the man who many believe was one of the most evil men who has ever lived. The reality is much different of course, and Dennis has done a fantastic job at exposing the lies and giving the truth a platform in a way the mainstream media cannot. | More

“The war now proposed is for the purpose of establishing
Jewish hegemony throughout the world.”
—US Brigadier General George Van Horn Moseley, March 29, 1939

WE FOLLOW HITLER’S CHILDHOOD to the death of his mother and his broken ambition to become an artist, then further to his entry into politics. His decorated service in the army during the Great War, his writing of Mein Kampf, politics, and most importantly Germany’s revival are well explained, followed by WWII and the Holocaust myth.

AFTER THE FIRST HOUR we begin to suspect that we have been seriously lied to about the events surrounding the Second World War, and by the end we are left with the unsettling realization that the real threat to world peace was not, and is not, where our attention is being directed by our corrupt politicians and media…

The Myth of German Villany…

“Germany must perish! By word of science, as the best means
of ridding the human race of its misfits.”
—Theodore N. Kaufman, March 24, 1933

Here is the story that the rulers of this world have been keeping from you for over 70 years. Learn the terrible truth about the rape, torture, slavery, and mass murder inflicted upon the German people by the Jewish-controlled Allies during and after World Word II. This is the biggest cover-up in world history.

The aftermath of the Allied ‘terror bombing’ of Dresden, in which 250,000 men, women and children were burned alive.

BOTH WORLD WARS were brutal and barbaric. Both were initiated and supervised by the international Jewish bankers, who tricked the U.S.A. into the fighting each time, on a promise for a homeland for the Jews. But the inhuman, monstrous campaign of annihilation inflicted on the millions of innocent German women and children in WWII is almost impossible to comprehend—until we realise that the Jews were behind it.

“KILL! KILL! In the German race there is nothing but evil; not one among
the living, not one among the yet unborn but is evil… Use force and break
the racial pride of these German women. Take them as your lawful booty.
Kill! As you storm onward, kill, you gallant soldiers of the Red Army.”
—Ilya Ehrenburg, Jewish advisor to Stalin

PYCHOPATHIC barbarity is written into the sacred Judaic texts, especially the Talmud (pdf). Witness the grotesque spectacle of Israel’s ongoing campaign of genocide against the Palestinians. For millennia, great thinkers and philosophers have spoken out against the alien*, almost non-human* zeal with which the Jews pursue their relentless, murderous agenda against all non-Jews.

Adolf Hitler had witnessed how the Jewish bankers had tricked Europe into The Great War, and then bled it dry with the treacherous Versailles Treaty. When he came to power in 1933 he could see they would try to do it again, so he repeatedly petitioned Churchill—and the Pope, and Stalin—for peace, to try and avert a destructive war.

MOST OF ALL, Hitler desperately wanted the pernicious Jewish influence out of Germany. THIS was his attempt at a Final Solution. He approached the French with a plan to resettle German Jews in Madagascar. He even signed the Transfer Agreement with the Zionists, to help create a Jewish homeland in Palestine—and paid for the resettlement of over 60,000 Jews—but was ultimately betrayed by the Zionists, who wanted Germany to be totally destroyed.

*It is believed by some that Judaism is not a religion, but a system of parasitic mind-control—from outside this planet. | See: Judaism: The Root of All Evil | The Archon Solution

Something else you didn’t know…

IT IS TIME to start thinking the unthinkable: time to wake up to the reality that everything we’ve been told about about Adolf Hitler is a monumental lie: that far from being the great evil of the 20th century, Hitler was engaged in an epic struggle against the most monstrous anti-human agenda the world has ever known. An agenda that is still playing out. Since the mid-20th century, the world has only ever heard one side of this incredible story. The story of a boy from an ordinary family whose ambition was to become an artist, but who’s destiny was to rise to the greatest heights of power, to become one of the most influential men who ever lived. And when the curtain of lies is finally pulled aside, we behold a man of courage and compassion, to whom we all owe a huge debt.

WHEN HITLER WAS ELECTED in 1933, the German people had no work, no money and were starving. A wheelbarrow full of 100 billion-mark banknotes could not buy a loaf of bread at the time, and many Germans were living in shacks after countless homes and farms had been seized by the International Jewish Bankers who had deliberately crashed the German economy.

Hitler changed all that. Within months he had put millions back to work. The Nazi government completely outmaneuvered the Jewish banking cartels by issuing its own debt-free currency, uncontrollable by international financial interests. WORLD JEWRY immediately responded by declaring war on Germany, starting with a global boycott of German goods—but in spite of this, within two years, the German economy was flourishing and Hitler had becomes an inspirational hero to his people.

In response, the World Jewish Congress and the Zionist leaders succeeded in initiating World War II, which resulted in the deaths of 60,000,000 people:

“The worldwide boycott against Germany in 1933 and the later all-out declaration of war
against Germany, initiated by the Zionist leaders and the World Jewish Congress.”
—Rabbi Schwartz, Friends of Jerusalem, New York Times, Sep. 30, 1997

HERE BEGAN the modern European Genocide—a systematic eradication of the peoples, cultures and traditions of ethnic Europeans that continues to this day with the Jewish-orchestrated “refugee” invasion and forced multiculturalism of Europe. When we begin to dare to think for ourselves and uncover the truth about Hitler’s Germany, we quickly realise that notions of a ‘Master Race’ and a ‘Final Solution’ are not German but Jewish concepts. The truth is that it is THE JEWSwho consider themselves the Master Race—and the eradication of all non-Jews, starting with the Islamic invasion of Europe, is their Final Solution!