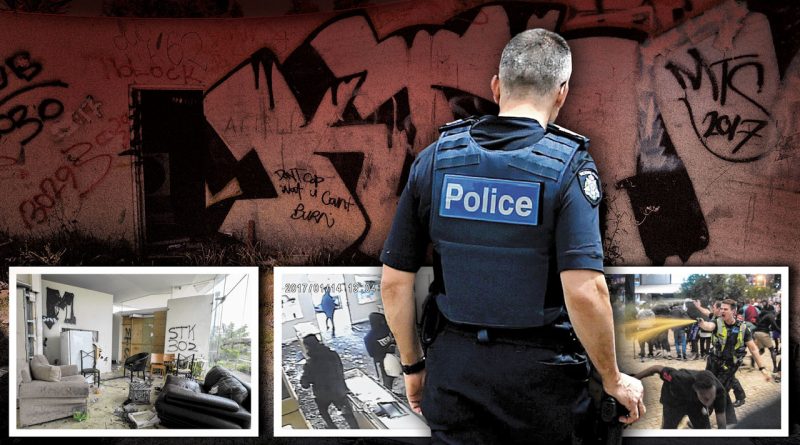 Australia is suffering from the same type of Saul Alinskyite neo-Marxist infestation as Sweden. Fifth columnists infiltrated the judiciary, media, police and government. This is NOT organic, and it has manifested itself in the form of rampaging mobs dominated by black African youth. Presented below is a sampling of videos illustrating this issue.

Keep in mind that unlike in Europe, African migrants didn’t just arrive on floating rafts. There is some 5,500 miles (8,800 km) between the eastern most part of the African continent and the western most part of Australia, and it’s at least a 10-hour flight. So the question begs: How did they get there? Who brought them into Australia?

As background, there are 24,000 Sudanese, 10,000 Somalis, 18,000 from Mauritius and a few thousand from various other African countries in Australia. The epicenter of the mob is Melbourne and is largely Sudanese. The Sudanese arrived between 2003 and 2006, meaning that most of the young vagabundos were raised in Australia.

A second large wave of migration from the dark continent to Australia occurred between 2011-12. As we also saw in Sweden, there was a special criminality in that second wave that jump-started rampant wilding and mob behaviors. Selected for ultimate chaos? A real investigation would look into the parties responsible for that importation of thugs. The fact that this hasn’t happened is extremely suspicion.

As seen in Europe and America, government groups and some media employ cheap shadow-word games and lies to describe the situation. Victoria Deputy Police Commissioner Shane Patton said that “networked criminal offenders” are not technically “gangs,” because they lack any organised structure. Then, as the incidents pile up, Patton claimed the group was “just an alcohol-affected mob.” In fact, the drug of choice is Khat, an amphetamine-like stimulant that is said to cause excitement and euphoria. You will see the jazzed up effect in the video clips.

It is now admitted that new and more-dangerous mob operatives are on the scene. One is appropriately called Menace to Society (MTS). Its modus operandi has expanded to targeting and ambushing police.

In December, MTS took over and tore up a Melbourne community center and turned it into a drug dispensing hangout.

Melbourne’s expensive and once vaunted Metro line system has been badly harmed by gangbangers. Notice that this TV station had to resort to a FOI to get the data on this from police.

It was claimed that the initial gang, Apex, was primarily composed of young Sudanese men and boys, but Victoria Police has since stated that the gang is a “non-entity,” is “no longer and never was predominantly African” and that “a large cohort of that gang was in fact Australian-born offenders.” Police claimed Apex had little structure and no official colors. However, when one examines the video, there’s clear evidence. The following clip shows a black mob going right into middle-class neighborhoods, and specific garb [at minute 1:28] is quite apparent.

This trying to stick it on “Australian born natives” didn’t go over well in sane Australian circles as there is clear video evidence and documentation showing almost all are dark skinned individuals.

Next, leaders in the African community admitted they do have issues with a small cohort of African youth who are committing high-end crimes, Patton told The Australian. If we apply logic, it’s evident in the videos that hundreds — if not thousands — of African youth are involved in these wildings. If we take the total Sudanese and Somali population of 34,000 and subtract out those not between 12 and 25 years old, we are left with perhaps 5,000 to 7,000 youth. In reality, a far-too-large percentage of them are drugged wilders.

After the Moomba Festival fireworks on the night of Saturday March 13, 2016, there was a brawl in and around Federation Square in Melbourne’s Central Business District, largely between members of Apex and Islander 23. Around 200 mostly young men participated in the brawl. Eyewitnesses said it looked organized. Incredibly, only four were arrested.

Facts on the ground point to African girls egging on the action and brawling. This is similar to wilding behaviors seen in mall mob events in the U.S. Witnesses put the wilder mob size at St. Kilda Beach as 200. And once again, eyewitnesses describe the perps as organized, with whites being the targets.

As wildings incidents mounted, Border Force Chief Roman Quaedvlieg stated that mob members could be deported under legislation previously used to deport outlaw motorcycle club members. Anthony Kelly, head of the Flemington and Kensington Community Legal Centre, expressed the dindu (didn’t do nothin’) philosophy and claimed such legislation would be inherently racist and akin to apartheid.

Even as late as January 2018, Home Affairs Minister Peter Dutton was ridiculed as racist by the masochist fifth-column cabal when he commented that sentences being handed down were “too light” due to “political correctness that’s taken hold.”

“There’s no deterrence there at the moment,” said Dutton, adding that Victorian courts are filled with “hard-left activist judges” who engaged in an “ideological experiment” in sentencing.

The federal government needs to “weed out the people who have done the wrong thing,” including deporting people who are not Australian citizens, Dutton said, and linked the issue to federal Labor’s refusal to pass a stricter citizenship test. He said if people “are not prepared to integrate” by sending their children to school and preventing them from “wandering the streets at night committing offences,” then “they don’t belong in Australian society”.

This article originally appeared on The New Nationalist and was republished here with permission.

9 thoughts on “African Gangs: the Plague Upon Melbourne, Australia”