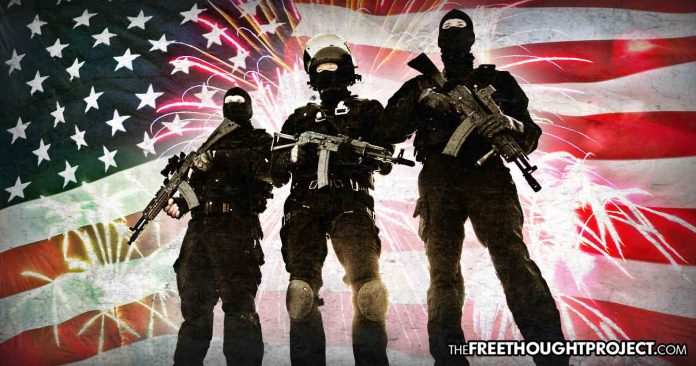 Every year on July 4th, Americans celebrate their “freedom” by remembering that the United States of America began as an uprising, intent on ending the overburdens of taxation, tyranny, oppression, and the pilfering of our country’s natural resources.

So what has changed since 1776? Absolutely nothing. In fact, it has gotten worse.

Today in America, citizens regularly make payments to the Internal Revenue Service of the U.S. Federal Government because they are too poor to pay their taxes in one lump sum. Those payments also have interest and fees applied and keep such citizens, it seems, permanently indebted to a government which has no problem spending its revenue (taxes) on perpetual war, a 17-agency strong spy infrastructure, and building up its nuclear supply.

Freedoms, which Americans used to enjoy without constantly being harassed by legal lapdogs known as law enforcement officers, are now stolen from us and sold back to us at a high price. The right to carry a gun, in many states, comes only after someone gets a “permit to carry.” That permit is not free. In fact, none of the permits listed below are free. The only free thing anyone gets if they don’t get a permit is the freedom to be fined, arrested, or taken to jail.

These are the top five things you must have a permit for in order to engage in the activity:

1. Work – Yes, in America, we have to purchase work permits (minors), licenses (for nearly all professional positions), permits (to handle food), and the list goes on.

2. Travel – Unless you want to stay in one city your entire life, you have to have an ID to travel by the interstate bus system, the railways, the airways, and the open road (drivers license).

3. Marriage – Permits must be obtained to marry anyone, ever. Those permits also come at a price and if the couple decides they no longer want to be married, they must pay the state to get a divorce, which can also be very costly.

4. Eating – If you want to catch fish or hunt and eat your catch or kill, you’ll need a permit for that too.

5. Recreation – Often, permits are required to be placed on watercraft such as houseboats, kayaks, jet skis, and fishing boats. Anyone caught without valid permits can be subjected to fines. Park passes are also required before visitors can enjoy the God-given creation found in state and national parks.

Taxes are now levied on everything bought and sold in the United States. Until last week, some people were allowed to escape taxes of some online purchases, but the Supreme Court closed that loophole.

The earliest of Americans complained that they were forced to provide room and board to British troops. The Quartering Acts were considered an invasion of privacy and a violation of property rights, but now the federal government of the United States does far worse than being an imposition for a short period of time. They are spying on all Americans and getting away with it, all in the name of fighting the “War on Terror.”

Thanks to  NSA Whistleblower Edward Snowden, we now know there are at least three major spying programs that collect the private conversations, internet searches, and movement data of all citizens in the United States—all of the time.

Others are sounding the alarm as well. Lawyer John Whitehead, of The Rutherford Institute, made a name for himself by fighting back against the government in the court of law on behalf of citizens who believed their Constitutional rights had been infringed upon. Whitehead paints one of the most vivid pictures for people to understand what is really going on with individual freedoms in America.

In a recent interview with the Liberty Report, Whitehead revealed why he is convinced we already live in a police state, much like the oppressive one the British subjected the American people to over 230 years ago.

Whitehead stated that modern day policing is out of control, costing taxpayers millions of dollars in illegal arrest lawsuits, but what really concerns him is the fact that the incidents are not isolated. He said:

Whitehead argued that Americans are completely distracted from the realities they face because they are so addicted to their cell phones that they are too busy to notice that the government is infringing upon their rights every second.

For those who think they are still living in “The Land of the Free and the Home of The Brave,” Whitehead said, “We live in a total surveillance state now. Everything you’re doing is being watched.” So go ahead. Enjoy your cell phones, and Facebook posts of friends drinking beer and partying. Happy Independence Day!

6 thoughts on “As Americans Celebrate “Freedom” on July 4, Here’s Proof We Are NOT Free”