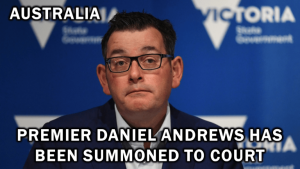 Daniel Andrews, Premier of the State of Victoria, Australia, has been accused of misprison of treason and fraud at common law. On these two charges he is summoned to court on 17 December 2021.

Andrews is accused of concealing an overt act of treason for the unlawful and criminal act of removing “The Crown” and “The Monarchy” through legislation enacted on 1 January 2004 titled: “Acts Amendment and Repeal Courts and Legal Practice Act.”

The Legislation is an overt act of treason and the concealment of treason is the element for misprison of treason.  The element of fraud is the deliberate attempt to conceal this material fact.

Commonwealth Public Official Jim Rech and Dezi Freeman, a photographer, have electrified many Australians who have become aware that the government has taken HM Queen Elizabeth II of the United Kingdom, Northern Ireland and the Commonwealth, out of the Constitution.

The Bloody Aussie Battler has been recording the work of “these two brave men” as they “continue to arrest those sitting on the bench without any Crown authority.”  They have arrested two magistrates: one in Wonthaggi and the other in Wangaratta, both in the State of Victoria.

In Melbourne on 28 November 2021, Rech announced to protestors that criminal charges had been laid against Premier Daniel Andrews and he had been issued summons to attend court.

“Daniel Andrews has a court date at Myrtleford Magistrates Court on 17th of December.  He was charged with, but not limited to, misprison of treason and fraud.  And as a result of those charges being filed and served, they were served at his electoral office, … the police have been given notice … The courts have been told to supress the listing but we put it out there, we’ve been to the court registrars.  Now that means any politician on indictable criminal offences which is a life penalty but under martial law it’s a death sentence – it has to go to a grand jury,” Rech told the crowd in Melbourne.

One thought on “Australia: Premier Daniel Andrews Has Been Summoned to Court”