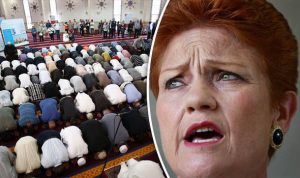 A MAJORITY of Australian voters believe the country is full and almost half support a partial ban on Muslim immigration, a new survey has revealed.

In a blow for official multiculturalism, it found that just over 50 per cent of voters agree that Australia has changed beyond recognition and “sometimes feels like a foreign country”.

The explosive data from the poll, commissioned by The Australian Population Research Institute, has enormous implications for the main political parties as ordinary Australians cope with massive population growth driven by record migrant intakes.

Melbourne has among the highest growth rates of any city in the Western world — it added nearly one million people over the last decade to reach a population of more than 4.7 million.

Arrivals from Asia dominate annual migration to Victoria, with those born in India and China the top settlers.

The TAPRI survey, to be released on Thursday, was done in July-August and based on a random national sample of 2067 voters from an online panel of 300,000 people run by The Online Research Institute.

It found that 74 per cent thought Australia did not need more people, with big majorities believing that population growth was putting “a lot of pressure” on hospitals, roads, affordable housing and jobs.

Fifty-four per cent wanted a cut to migration, while 55 per cent agreed Australia “was in danger of losing its culture and identity”, and 52 per cent said the country had changed so much that it sometimes felt foreign.

On Muslim immigration, 48 per cent supported a partial ban, a quarter opposed a ban and 27 per cent neither supported or opposed it.

While Coalition and One Nation voters were more likely to voice concerns over migration and cultural diversity, substantial minorities of ALP voters had similar views.

In their report on the data, TAPRI researchers Dr Katharine Betts and Dr Bob Birrell said that the results revealed much higher public concern over such issues, than recent surveys by outfits like the pro-migration Scanlon Foundation.

The authors said the nation’s political and economic elites had relied on the foundation’s consistent reports that most Australians supported their migration and multicultural policies, partly because Australia had been insulated from the economic shocks suffered by some other Western countries.

“(But) Australian voters’ concern about immigration levels and ethnic diversity does not derive from economic adversity,” the TAPRI report said.

“Rather it stems from the increasingly obvious impact of population growth on their quality of life and the rapid change in Australia’s ethnic and religious make-up.”

The authors said that such voter angst could easily be exploited in campaigns by parties like One Nation and Australian Conservatives, but it also offered the Coalition government a lifeline in the face of consistently bad opinion polls.

“The Liberal Party may have little choice but to mount such a campaign because it faces electoral oblivion in 2018 if it does not guard its voter base from challengers from the right,” they said.

“If the Liberals do make such a move, Labor is likely to be a big loser, given that many of its supporters are potentially responsive to such a move.”