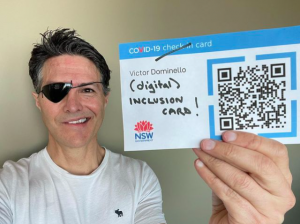 An Australian Member of Parliament, Victor Dominello has been diagnosed with Bell’s Palsy after AstraZeneca vaccine (branded as Covishield in India) after viewers noticed his ‘droopy eye’ during the state’s live COVID-19 update press conference.

NSW’s Customer Service Minister Victor Dominello got himself checked out after viewers tuning into the state’s daily COVID-19 press conference commented on his droopy eye, with some suggesting he was winking at the camera and others thinking he had a stroke. 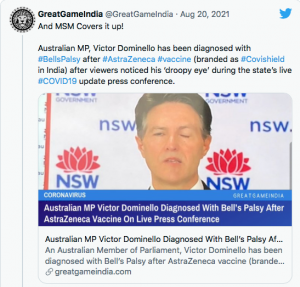 Victor Dominello appeared at the press conference on Wednesday to discuss business grants as the state recorded a staggering 633 local infections.

In an update later that night, Mr Dominello issued a thank you to the viewers who sent him messages of concern after tuning into the press conference. “At this morning’s press conference – a number of people commented on my droopy eye,” he wrote on social media.

“Some people thought – I was winking at the cameraman. Some thought I had a stroke.

“I have actually been diagnosed with Bell’s palsy.”

Mr Dominello explained he began to feel a pain in his skull, behind his right ear, about 48 hours earlier.

On Wednesday morning, he woke up with pins and needles on the right side of his tongue but failed to notice any droopiness around his eye.

“I only took it more seriously this afternoon – after a number of people sent me a screenshot of the press conference and others contacted my office prompting me to seek urgent medical advice,” he said.

“Thanks to everyone who reached out.”

Although, Mr Dominello was vaccinated with AstraZeneca’s vaccine (branded as Covishield in India), no media bothered to mention it in their reports.

Mr Dominello received his first AstraZeneca vaccine dose at the Homebush Vaccination Centre on 27th May.

Interestingly, he was to receive his second AstraZeneca dose on the very same day of the press conference when he was spotted with Bell’s Palsy.

He posted on his Instagram, “My second AstraZeneca dose is scheduled for 19th August”.

Recently, Health Canada, the department of the Government of Canada responsible for national health policy added Bell’s Palsy as a warning to Pfizer COVID-19 vaccine labels.

Symptoms after vaccination may include temporary weakness or paralysis on one side of the face, according to an advisory issued by the department.

Other symptoms include, “uncoordinated movement of the muscles that control facial expression; loss of feeling in the face; headache; tearing from the eye; drooling; lost sense of taste on the front two-thirds of the tongue; hypersensitivity to sound in one ear; or inability to close an eye on one side of the face,” according to the advisory.

Earlier, a mysterious illness stopped the AstraZeneca coronavirus vaccine trials. It was reported to be an inflammatory syndrome known as transverse myelitis which may also lead to paralysis.