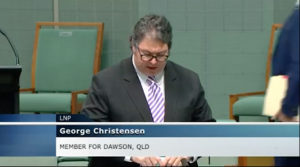 Australian Nationals MP George Christensen has been censured by colleagues for criticising the bloated, unelected health bureaucracy’s response to COVID-19.

Christensen spoke out against the “COVID zero” freedom-killing one-eye policy solutions being chased and supported by both sides of the government.

He cited the negative impact of excessive lockdowns, uselessness of mask mandates, and called domestic COVAXX passports a “form of discrimination.”

A Labor motion reprimanded the Nationals member, calling his words an “attack on our medical heroes.”

Labor accused Christensen of “spreading fear;” and of advocating “unproven and, indeed dangerous remedies which are completely contradictory to the scientific advice and the advice of our health professionals.”

The motion was fully supported by Christensen’s home team; the Morrison government.

By backing the opposition’s reprimand, Scott Morrison was asserting governmental definitions of what constitutes “misinformation.”

The Australian added that Government sources have said Morrison’s support for the reprimand was also a move against the Opposition.

She called the LNP push for AZ “a population-level experiment which has high stakes attached to it,” stating, “personally I’m not comfortable with that approach at all.”

The Labor candidate has also appeared on The ABC’s Q & A, telling an audience member to “take your advice from a doctor, not politicians.”

Dr Ananda-Rajah supports Pfizer, Moderna mRNA options, as well as the traditional, non-mRNA Novavax option (not yet available in Australia).

Albanese probably won’t because, according to The Sydney Morning Herald, the opposition leader has refused “to encourage the take up of AstraZeneca.”

Albanese’s belief in “medical experts” and his reprimand of Christensen appears to be consistent with his statement in June defending this refusal.

Albanese deflected criticism claiming that “politicians shouldn’t be the ones giving health advice. Medical experts should.”

Quite the political circus.

In other words: ignore the politics of COVID.

This was followed by a dissonance as loud as “hate Trump, love trumps hate!”

Perhaps he’s not aware of the bitter division being caused by his government’s “get COVAXXED, or else!” propaganda.

Maybe he’s never had a neighbour dob him into a police hotline like a concerned citizen would a potential terrorist, for alleged offences against COVID restrictions.

Maybe the Prime Minister missed the demonisation of freedom protesters as “selfish super spreaders.” Protesters who aren’t the epicenter of a major COVID outbreak, despite apocalyptic predictions from legacy media to the contrary.

The good news is that Christensen’s political reprimand may not achieve what was intended.

Instead of silencing the facts, it has uncovered the division about the government’s Astra-Zenaca COVAXX push.

Instead of hiding COVID politics from Australians, it shows a secretive government doing its best, not to maintain unity, but preserve its own electability.

The Prime Minister is a hypocrite if he’s preaching unity while pushing policies that divide and segregate Australians.

Calling health bureaucrats “medical heroes,” while ignoring the censorship of medical practitioners on the ground, makes the opposition leader himself guilty of spreading misinformation.

The most important of all is the trend to censure elected, and prospective members of parliament for exercising their right to protest regressive government initiatives.

This includes the unjust reprimand of bipartisan critics who are standing up against overbearing, and secretive government programs that bypass debate in favour of rule by bureaucratic decree.

At this point we shouldn’t be censuring George Christensen; we should be offering him a knighthood. If not the Order of Australia, or a Victoria Cross for bravery.

The same goes for Craig Kelly and any other political appointee who sees through the COVID politics and is willing to call the nonsense what it is: political bulldust.

When will the madness end? How many more freedoms will we lose due to fear of a virus which has a survivability rate of 997 out of a thousand? It’s time we stopped spreading fear and acknowledged some facts. Masks do not work—fact. It has been proven that masks make no significant difference in stopping the spread of COVID-19. Lockdowns don’t work—fact. Lockdowns don’t destroy the virus, but they do destroy people’s livelihoods and people’s lives. Studies have shown that they can even increase mortality rates. Domestic vaccine passports are a form of discrimination—fact. We are all human beings; nobody should be restricted from everyday life because of their medical choices, especially when vaccinated people can still catch and spread COVID-19.

Our posturing politicians—many over there—the sensationalist media elite and the dictatorial medical bureaucrats need to recognise these facts and stop spreading fear. COVID-19 is going to be with us forever, just like the flu. And, just like the flu, we will have to live with it, not in constant fear of it. Some people will catch it. Tragically, some people will die from it. That’s inevitable, and we have to accept it. What we should never accept is the systematic removal of our freedoms based on zero-risk health advice from a bunch of unelected medical bureaucrats. Open society back up! Restore our freedoms! End this madness!