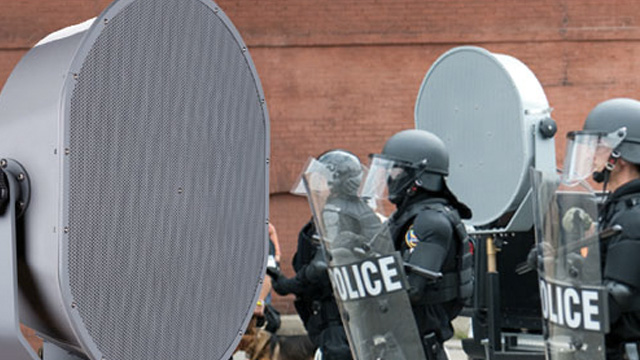 They can break up protests with loud, piercing sound, but Long Range Acoustic Devices (LRADs) can also cause permanent hearing damage. Australian law enforcement agencies are now investing in the technology, but sound and law experts say their potential use is extremely concerning.

Australia’s police forces are buying up devices capable of causing long-term hearing damage from a distance.

The controversial Long Range Acoustic Device, or LRAD, has been used to disperse crowds in protest situations in the US.

The secrecy of the state around the tools, the weapons that it has and is capable of using on its population is something to be really, really concerned about.

Its use at a Pittsburgh G20 protest in 2009 left University of Missouri English professor Karen Piper with permanent hearing damage.

‘We had seen these machines there [that] looked like an armoured vehicle with a satellite dish on top,’ says Piper, who had been observing the protest from a distance.

‘Then this machine emits this long piercing noise. It’s a very high frequency, it really hurts your ears.

‘I started to not feel well immediately after that. I felt dizzy and nauseous and disoriented.’

IMAGE: POLICE IN BALTIMORE DEPLOY AN LRAD TO DISPERSE PROTESTERS FOLLOWING THE FUNERAL OF FREDDIE GRAY IN 2015 (GETTY IMAGES/CHIP SOMODEVILLA)

Piper’s hearing continued to suffer in the following days and months. Tests eventually revealed the effects caused by her exposure to the LRAD were permanent.

‘It’s actually nerve damage, and those nerves will never recover,’ she says.

LRADs continue to be used by American authorities, including during protests over police brutality in 2014.

The Law Report contacted all of Australia’s police forces and found more than half now own LRADs.

Victorian, West Australian, South Australian and Queensland police, as well as the Australian Federal Police, admitted to purchasing the device, while New South Wales and Northern Territory police would not comment.

Melbourne University sound and law expert James Parker says potential use of the LRAD in Australia is deeply troubling.

‘The secrecy of the state around the tools, the weapons that it has and is capable of using on its population is something to be really, really concerned about,’ says Parker.

‘It expands the nature of police/state/military authority in a certain kind of way. It makes sound itself part of the arsenal that police and military and state institutions have.

‘I think there’s a question about whether or not we want sound to be used in this way at all.’

The LRAD is marketed as a communication device, and was first used at sea by the US Navy and commercial shipping companies to ward off pirates.

Later, the device was deployed by the US military in Iraq and Afghanistan to clear buildings.

‘They could play the LRAD’s alert function at high volume, people wouldn’t be able to stand it, they would run out and the snipers could pick them off,’ says Parker.

Parker says LRADs have since been marketed ‘quite aggressively’ to military and police forces around the world.

IMAGE: POLICE IN CHICAGO WITH A MOUNTED LRAD. (FLICKR/VONDERAUVISUALS (CC-BY-NC-ND-2.0))

None of Australia’s state police forces would provide The Law Report with guidelines for LRAD use, though some said they would only be used for communication, such as in siege situations.

Yet Parker says the nature of the technology and its ability to cause harm to bystanders means it should be the subject of much broader debate.

‘Police and military have been able to hurt people for a long time—they have batons, they have guns—[but] the LRAD is indiscriminate,’ he says.

‘Whoever happens to be in the way of the soundwave is equally likely to be affected, no matter who you are, no matter why you are there. At least a baton should in principle be aimed at somebody, while the LRAD is aimed at everybody.

‘Whether or not my hearing is damaged at a protest because the police use the LRAD, I think there’s something malevolent about the fact that I’m just being compelled through sound to act in a certain way. I’m being treated as a brute biological entity.’

In Karen Piper’s case, she successfully settled for damages of $72,000 against the City of Pittsburgh, and has since pushed for clearer guidelines around the use of LRADs.

But she says no amount of money is worth the loss of her hearing.

‘You can’t put value on a human organ like that. I have to live for the rest of my life knowing that my hearing is already bad and will get worse as I age.

‘I [don’t] want that to happen to anybody else.’

Subscribe to Late Night Live on iTunes, ABC Radio or your favouritepodcasting app.