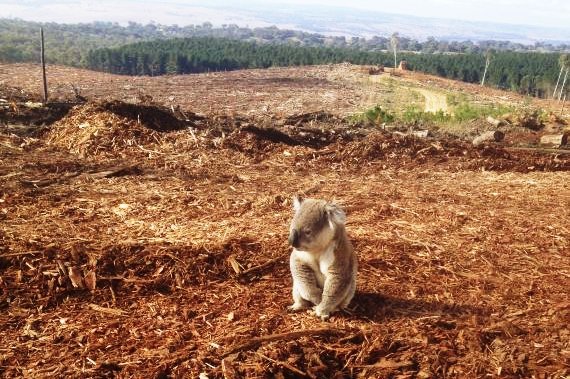 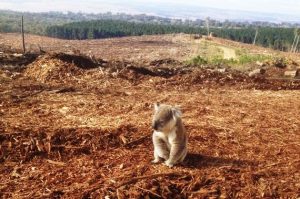 Conservation groups and an increasingly aware public are aghast at the latest efforts by the Berejiklian Government to allow open slather on the environment and wildlife.

On 9 March, the Land and Environment Court ruled the NSW Government’s land-clearing laws invalid because they had been made unlawfully. The judgement was in response to a legal challenge by the Nature Conservation Council last November, represented by the Environmental Defenders Office NSW.

The basis of the legal argument focused on the failure of the Primary Industries Minister Niall Blair to obtain the concurrence of the Environment Minister, Gabrielle Upton, before making the codes, as is required by law.

The codes are a disaster for the environment, with the Government’s own assessment that they will lead to a 45% increase in clearing including 99% of identified koala habitat on private land. 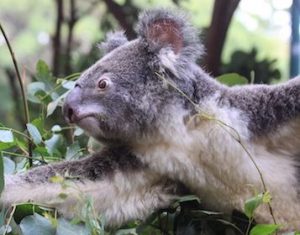 Under new laws passed by the Berijiklian Government, there will no longer be a requirement to search for koalas prior to logging (Image via nefa.org.au)

According to the Nature Conservation Council CEO, Kate Smolski,

“The laws were made against the advice of the scientific community and against the wishes of the vast majority of many thousands of people who made submissions.”

At 3.40pm on 9 March, legislation was passed effectively overturning the Land and Environment Court decision, by ensuring concurrence with the Environment Minister and thus legalising these appalling codes. The speed of action by the Berejiklian Government seems to point to the electoral power of vested interests. Is this Government hell-bent on destroying the environmental heritage of the State?

Over 2.2 million hectares of woody vegetation which has been identified as either being known or likely koala habitat could potentially be cleared under the equity code of the new land management framework. This equates to about 13% of the mapped woody vegetation across the State.

Berejeklian – who came to office via the resignation of former Premier Michael Baird – is a Premier without a vote. Her record on environmental issues is the stuff of nightmares. The reality is that under this unelected person, who promised “open and transparent government”, the State now has no legislation capable of protecting native forests, wildlife or their habitats. Legal challenges are now virtually impossible to mount as provisions for legal action have been removed and/or repealed.

Let’s start with native forests. According to the North East Forest Alliance, in February 2018, the NSW Government moved to change the rules to allow logging in “koala high use areas”.

North Coast Environment Council coordinator Susie Russell said both governments were asking people to “drop-in” and comment on whether the RFAs should be extended for another 20 years.

The Coalition Government in NSW is hell bent on destroying our childrens’ future, wiping out the environmental heritage on which human survival depends.

The reality of NSW under Berejiklian is that there is now NO LEGISLATION CAPABLE OF PROTECTING KOALAS, WILDLIFE OR FORESTS.

Today’s Australian reports on the latest poll which shows that Gladys Berejiklian is losing major support. She need to lose a lot more. If this woman is re-elected next year when the State elections are due, the environment and wildlife of NSW will be history.

Let’s take a good look at this nightmare government which is responsible for the most appalling environmental damage in recent history. The betrayal of the koala and the environment is so serious that if there were tribunals dealing with Crimes Against Nature, Ms Berejiklian, Ministers Upton, Pavey, Roberts and the National Party would all be charged.

The cumulative impacts of the decisions by this government which is clearly a puppet of big business, big agricultural interests and the mining industry need to be closely examined. Not something that the mainstream media is interested in doing, so Koala Crisis will provide a summary of the actions of Berejiklian.

Let’s not forget this woman was NEVER voted into office. She took over from the awful Mike Baird and proceeded with the well planned destruction of the state’s wildlife and native forest heritage.

* The Biodiversity and Conservation legislation wiped out any legal action by conservation organisations or the public interest. It repealed the Threatened Species Act, the Native Vegetation Act and sections of the National Parks & Wildlife Service Act. NO LEGAL OPTIONS AVAILABLE.

* The Local Land Amendment Act will allow for the wholesale clearing of forests and native vegetation on private land. The Code is currently being challenged by the Nature Conservation Council as it will, if allowed to proceed by the Land & Environment Court see a 45 per cent jump ANNUALLY in the rate of native vegetation destruction on farms. NO LEGAL OPTIONS UNDER THE ACT. GOVT STUFF UP ALLOWED FOR NCC TO CHALLENGE CODE, FINGERS CROSSED THEY SUCEED.

According to a Sydney Morning Herald report on the Land Amendment Act Code, the “ main benefits are likely to be private benefits for large farming operations which broad scale clear under the code.

* Regional Forest Agreements. The government is attempting to renew these agreements for 20 years.
Described as a sham consultation process designed to lock in unsustainable logging indefinitely.
The Forestry Commission is now targeting high koala use forests ensuring their looming extinction.

NO LEGAL OPTIONS are available to challenge the Forestry Commission or RFAs or breaches of RFAs. Logging is not under the scrutiny of Commonwealth law.

* Memorandum of Understanding on Wildlife Listing. Known as CAM.. the Federal government secretly signed an agreement with the states in 2015 which “ nationally harmonises listing of species across Australia”. In other words, there will be one national listing for species. As an example of what’s likely to happen, let’s take the squirrel glider. Listed as Vulnerable in NSW, threatened in Victoria, endangered in South Australia and common in Queensland.

Under this new MOU, the national listing could be as “ common” since the new attitude of the Coalition governments is that “ as long as there’s plenty of the species in one state, that’s good enough.” NO LEGAL OPTIONS.

* SEPP 44 ( State Environmental Planning Policy for Koala Habitat Protection – a joke as there’s no habitat protection) is to be amended and is now in draft form. NO LEGAL OPTIONS ARE AVAILABLE UNDER SEPP 44.

This is the reality of the Berejiklian government. A dictatorship by headed by a woman who arrived in the position of Premier with no vote from the electorate. Her promise to run an “ open and transparent government” is in tatters.

Meantime, the koalas are dying, wildlife is dying, forests are dying, and the government remains quarantined from the public.

Yell at your local MPs and MLCs. There’s too much at stake to be silent.