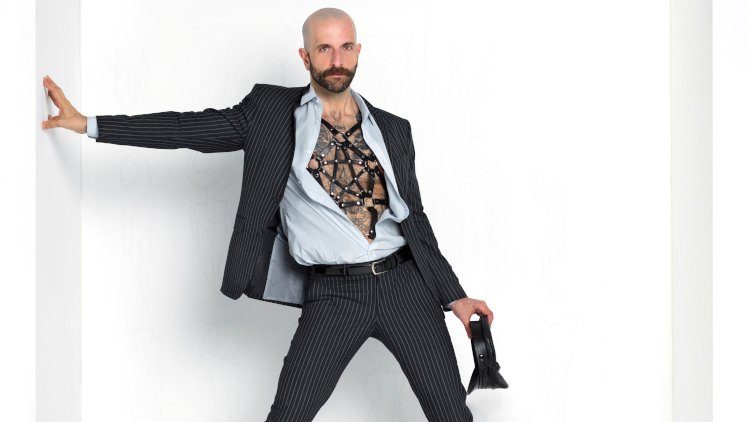 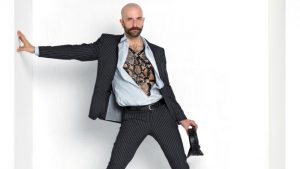 Author’s note: Most of the notes below come from an article published by New Punch (a website which I would not endorse in a million years) on September 10, 2022. However I think the information contained next is enough to get an idea of what this Satanic homosexual creature is all about. I will just leave it there before I vomit. It has been quite taxing for me putting the image gallery together.

I understand these jews are doing all this with the objective in mind of triggering the American Christian sector for the sake of a clear agenda, it is all a provocation after all. By the way remember Sam Brinton? These individuals are all very well-paid crisis actors in reality.

All in all my question is: What is the difference between this debouched Satanic individual and you Christians? Yes… that is exactly the question I am asking.

He is actually worshiping the same god, albeit in his own debouched style anyway. You both are the two opposing sides of the same Abrahamic coin… whether you like it or not.

Here is the official glowing announcement from Joe Biden that he has appointed Daskalakis to this prominent White House position.

Dr. Demetre Daskalakis currently “serves as Director of the Division of HIV Prevention at the Centers for Disease Control,” according to the White House and is the deputy national coordinator for the monkeypox response. As mentioned before the disease primarily affects homosexual men.

Daskalakis also has a tattoo of a pentagram on his body that reads, “I have learned there is light even in the darkest places.” Additionally, he has ink on his body that depicts an animal’s corpse, a serpent, a head with three eyes, and what might be a representation of Jesus Christ or a Saint.

It’s not the only time Daskalakis and MacNeal mention Christ in their social media posts. A lit crucifix of Jesus Christ is seen lying on a pentagram on the table in a sequence of photographs from 2012 that seem to show a seance or Ouija board ritual.

Daskalakis and his “husband’ are also involved with a fitness center called “Monster Cycle + Studio.”

A 2014 article in the New York Post described how it is different than most health clubs. The New York Postreported that “graffiti, illustrations of ghosts and #hellyeah” signs [hang] throughout.”

“In the lounge area, a black spin-bike hangs from the ceiling, draped in leather fetish gear. In the yoga studio, a massive, 11-foot-tall light-up pentagram by artist Desi Santiago leans against the wall, adding a unique ambience to the Sunday candle-lit yoga classes,” the publication reported. “A juice bar, serving up kale concoctions, is decorated with dozens of Mexican Day of the Dead skull masks.”

One of the owners said she does not “worship the devil” but just tries to draw “that energy” for this endeavor.

“We don’t worship the devil, we’re not Satan followers,” a female co-owner told the New York Post. “We’re just sort of taking that energy and making it more positive.”

“My favorite video to ride to is Nine Inch Nails’ ‘The Perfect Drug,’ because it’s dark and sexy with a driving beat. A Goth workout in a cycle dungeon is total bliss,” the nation’s new monkeypox coordinator told the Post in 2014. “Every day is Halloween.”

“Not cherry picking here. The Pentagram is proudly displayed in his *promotional* photos for a CDC appointment. It’s ubiquitous on his social media,” Johnson wrote. “Demetre has Pentagram tattoos. So it’s a fair question: Did Joe Biden appoint a Satanist?” [image]

He said “the American public has a right to know if Joe Biden appointed a Satanist.”

The monkeypox coordinator also isn’t too quick to tell people to avoid other risky behaviors, according to information uncovered by the American Accountability Foundation. The conservative group found a 2018 or 2019 presentation given by Daskalakis while he served as a New York City health commissioner where he championed “safer crystal meth use” at sex clubs.

The Biden administration has a history of appointing officials to important positions who make public their sexual desires. Sam Brinton, its deputy assistant secretary for spent fuel and waste disposition, is a drag enthusiast who also has a fetish that involves pretending to be a dog or handling someone pretending to be a dog. He was also in a blasphemous drag group called “Sisters of Perpetual Indulgence.”

The Department of Health and Human Services media team did not respond to an email Friday morning that asked if Dr. Daskalakis is a Satanist, and if not, why he wears a pentagram.

Next is Demetre Daskalakis’ picture gallery. I downloaded plenty more of images featuring him dressed in satanic S&M costumes and the like, but I do not want to put people off (or myself) any further. I selected these ones randomly just for people to get the exact idea: 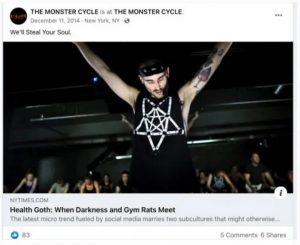 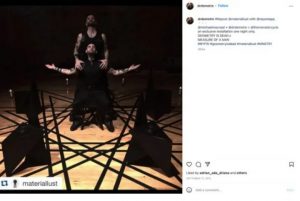 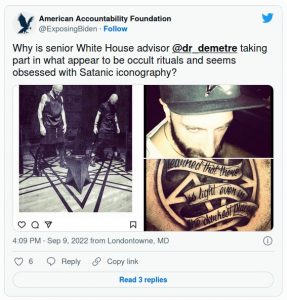 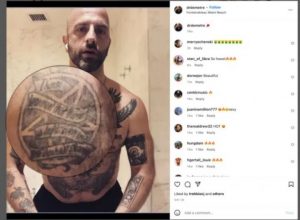 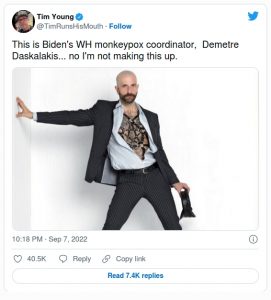 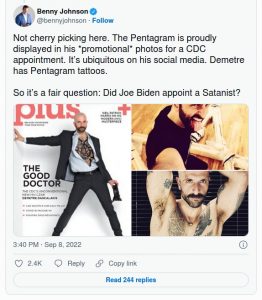