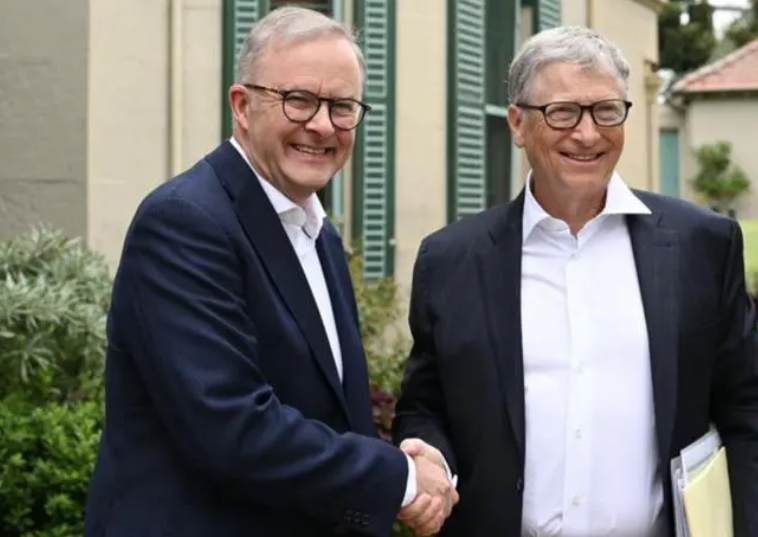 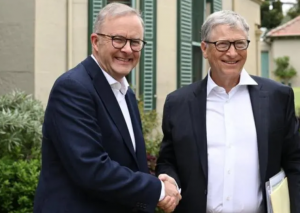 The puppet master touches down in Australia.

Prime Minister Anthony Albanese has hosted a meeting this morning with Bill Gates, representatives from his company Breakthough Energy, and members from the Bill and Melinda Gates Foundation.

It is the first time the pair have met and they are tipped to have discussed responses to energy shortages, future pandemic responsiveness and ‘climate change’.

Albanese thanked Gates for his ‘contribution to global health research’ and explained his government’s approach to climate change.

“We haven’t met before but I’ve admired your work and your contribution not just financially but in raising debates including the need to deal with health issues,” he told reporters.

“We’ve just been through the pandemic but we need to prepare for future health challenges and the work that’s been done on eradicating malaria and other diseases in our region.

And of course climate change, my government was elected on a platform of taking climate change seriously, we’ve introduced the first legislated caps of 43 per cent by 2030 and net zero by 2050.”

The billionaire thanked the PM for the welcome and said he was ‘looking forward to working with the government’.

“We’ve had a great partnership on global health Gavi, polio thanks for your increase on the Global Fund,” Mr Gates said.

A very out-of-the-blue touch down by ole’ Billy Boy on our shores, and if this is any indication of what they have revealed on a public level, just imagine what they are discussing behind-the-scenes.

No doubt prepping our new Puppet Minister on the course of action to be taken over the next four years.

Perhaps Bill’s expressed his plans for a ‘rapid response team’ to future pandemics? Perhaps to discuss his new book, which is a blueprint for world health control? Perhaps to clamp down on conspiracy theories?

Either way, Gates has been increasingly aligned with Australia and our establishment elitists in recent years, as we bow-down to the ‘expert advice’ of this man no medical degree or political experience.

This is another chapter in the Gates-Australia love affair. As in, he loves Australia.

Australia is in the good books of controversial eugenicist Bill Gates, after the ‘philanthropist’ had positive comments regarding this country’s coronavirus response.

In 2020, the billionaire praised Australia’s efforts when asked who he thought was doing best at balancing the pandemic response:

“South Korea, Australia – because this is an exponential event, a little bit of intelligence early on makes a huge difference,” he said.

This was when we had some of the world’s harshest lockdown restrictions. Go figure.

Let’s not forget: On 21 April 2020, it was reported that Prime Minister Scott Morrison spoke with Bill Gates to share thoughts on the potential of a future COVID-19 vaccine.