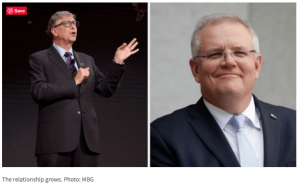 Bill Gates has donated $10 million to an Australian trial of a vaccine that researchers hope “will prevent severe cases of COVID-19 in at-risk groups, such as healthcare workers and the elderly”.

Nigel Curtis is the lead researcher at the Murdoch Children’s Research Institute, and he told ABC Radio the vaccine was already being trialled on healthcare workers in Australia. He hopes the funding will help expand the capacity of the program into new hospitals.

The trial is designed to test immune-boosting vaccines typically used against tuberculosis called BCG, with the aim of testing the vaccine’s effect on 10,000 healthcare workers worldwide.

To assess the interaction between the BCG vaccine and COVID-19, the trial relies on healthcare workers who have received the vaccine coming into contact with coronavirus cases.

The study started on March 27 at the Royal Children’s Hospital in Melbourne and has so far recruited 2500 healthcare workers across Australia.

The $10 million donation will also allow the trial to expand to Monash and Epworth hospitals in Melbourne and The Children’s Hospital at Westmead in Sydney, plus sites in Perth and Adelaide.

Professor Curtis said the Bill and Melinda Gates Foundation made contact with his group about a month ago, and following discussions over a week period, agreed on the new collaboration.

“We see it being used especially if there’s a second wave of COVID-19 in Australia or overseas,” said Professor Curtis, who is also a clinician and researcher at The University of Melbourne.

As the COVID-19 narrative continues to unfold, Australia’s role in the larger picture is being revealed.

The new investment is not an isolated incident, rather it is the latest installment in a long history of collaboration between Australian authorities, universities and the Gates Foundation.

Let’s not forget: On 21 April 2020, it was reported that Prime Minister Scott Morrison spoke with Bill Gates to discuss the future of the World Health Organisation (WHO).

Morrison and Gates are also understood to have discussed vaccines in their virtual meeting and roadmaps to overcoming Indo-Pacific’s ‘health challenges’.

The Gates Foundation is one of the WHO’s biggest voluntary donors, providing $836 million over the past two years. Bill Gates has been publicly critical of a decision by US President Donald Trump to suspend his country’s funding for the WHO.

This timeline is another example of Australia’s allegiance to this ongoing international plan. The country has worked closely with the United Nations for more than seven decades.

Gates has worked extensively with the University of Queensland (UQ) in recent years, collaborating to make vaccines “more affordable to girls and young women in the developing world”.

UQ has partnered with the Bill and Melinda Gates Foundation and the World Health Organization in an “endeavour to save more lives”. See the mission statement by clicking here.

In March, a patch invented at the University of Queensland — which promises to deliver vaccine concoctions six times more effectively than needles — has become a favourite of the Bill and Melinda Gates Foundation, which has awarded its creators a $7.5 million grant.

The university also works with the Bill and Melinda Gates Foundation on ‘key projects’ to “boost food and nutrition security” in tropics and subtropics across the developing world.

Should we really trust this organisation that is heavily lobbying Australian research efforts?

Gates’ relationship with the Australian government is a symbol of a large system of eugenics programs carried out by the Bill and Melinda Foundation all across the world.

Despite expected announcements of a slow reopening of society tomorrow, society is not expected to return to normal until a vaccine is developed. Even if an anticipated ‘second wave’ doesn’t occur.

Bill Gates has stated that broad vaccination for COVID-19 will need to become available “before you can be completely safe”. Until then, there’s a risk that communities could rebound unless they continue to practice strict social distancing to see case numbers level off.

Now, with the economy set to start up again, workplaces, shops, public gatherings and social interactions will all be radically different in the ‘post-lockdown world’.

We have seen the introduction of the new COVIDSafe app, lacking of privacy safeguards and designed to track-and-trace the interactions of millions. These measures, combined with psychological engineering of the public, will ensure society obeys in anticipation for the vaccine.

Behind the scenes, Bill Gates is working with Australian authorities and university researchers to ensure the ‘solution’ to these problems is found. What could possibly be the issue with that?

Remember, Bill Gates proudly speaks on his father’s involvement on the board of Planned Parenthood, which was founded on the concept that most human beings are just “reckless breeders”.

Gates would take the concepts learned in the family tree and incorporate them into building the foundational blueprint for a new era of ‘philanthropist’ activities with their organisation.

These activities include investments in expertise and platform technologies that help us make vaccines faster, ‘better’ and cheaper, in addition to also supporting numerous education and training programs that ensure knowledge around vaccines is created, shared and retained.

A eugenics organisation funding vaccine developments across the world, including Australia.

The billionaire was an early investing partner in the Global Alliance for Vaccines and Immunization (GAVI), which has now grown a substantial portfolio of public-private international health partnerships that are committed to increasing access to immunisation.

The Bill and Melinda Gates Foundation has already committed $100 million to fighting coronavirus, as part of its broader efforts in international health.

Bill Gates is now the talk of the town, and in a recent interview, he told The Daily Show that his foundation was funding the construction of factories for seven coronavirus vaccine ‘candidates’.

In the future, he has floated the idea of ‘vaccine certificates’ to show proof-of-vaccination following the widespread rollout of COVID-19 products, serving as a new pre-requisite for travel. Vaccines will soon become a requirement to return to many workplaces.

Moving forward, as the country re-opens, either society will obey this Brave New World psychological model of social distancing, or a second outbreak will force further changes.

Either way, the vaccine is the solution. Australia is once again right in the thick of the race.

Don’t the ‘ease’ of restrictions fool you. The agenda is still well on track, and Bill Gates has set his sights on Australia. He now hopes mass shots will be rolled out in as little as 9 months.

What will you do when the ‘solution’ comes? Have you considered your options for either coercive or forcefulmodes that may be used to achieve compliance? Interesting times ahead.