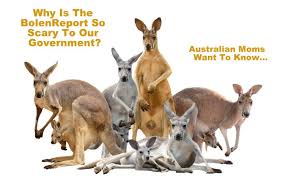 The downfall of tyrannies often reveals itself first in small things.

When BolenReport publisher Tim Bolen went to share my last article to Australian anti-vaxx groups on Facebook, he was immediately suspended from sharing any further articles on other Facebook groups for a week.

Call it FACEBOOK JAIL.  Many individuals, like Mike Adams from Natural News are familiar with these actions.

Yes, it’s absurd in comparison to what we would call oppression in the past, but in this new digital age the access to Social Media is just as important as the public square of past centuries.

And so one must meet absurdity with absurdity.

Which is why when Tim told me this information I figured it was my job as a top writer for The Bolen Report to chase down this claim.

I contacted the Australian Embassy in our nation’s capital, located at 1601 Massachusetts Ave. NW, Washington DC  20036, phone number (202) 797-3000 and spoke to a lovely woman in their media department and asked about her government’s relationship with Facebook.

I guess that 2010 is the date at which the very concept of privacy died in Australia, but I will have to do some further research to verify this assertion.

The lovely woman in the media office at the Australian Embassy in Washington, DC suggested I simply address my email to “Media” since there is usually a good deal of turnover and she didn’t have a current name.  Besides, addressing somebody as “Media” probably translates better when dealing with international relations than the more common American term for the media, “Bozo” which can so easily be misunderstood by those with different cultural backgrounds.

It is with a keen appreciation of the intricacies of international diplomacy,

Especially considering my first attempt at negotiations with the Australian government resulted in being banned from Australia for a period of three years, (what George Orwell, writing in 1984, would call being made an “unperson”), I wrote the following email:

I write for The Bolen Report and wanted to ask whether Australia has any type of relationship with Facebook which allows them to prevent information the government deems to be dangerous (like anti-vaxx sentiment or sympathies) from being distributed in Australia.

For example, if somebody was trying to distribute anti-vaxx information in Australia through Facebook, would the Australian government contact Facebook (or possibly have a pre-existing relationship and set of procedures which covers such events) so that Facebook could immediately respond, and say suspend that poster for a week, to be followed by more draconian methods if the behavior continued?

All the best, Kent Heckenlively

I am sorry to report to my readers that I have not received a response as of yet from the Office of the Australian Information Commissioner.

However, I will tell Tim to try and post again to the Australian anti-vaxx groups when his one-week Facebook jail term is up and see what happens.

And I would be remiss indeed if I didn’t remind the Australian government that President Trump has expressed anti-vaxx sentiments similar to many in our community.  Perhaps you should keep that in mind, especially since as I understand it, we have an amazing surveillance apparatus and he is probably watching just how you treat us.  (After all, we are his FAVORITE health news site!)

NOT THAT I HAVE ANY INSIDE INFORMATION.

(And I pinkie-promise swear I didn’t give him that line in his recent press conference about legally prosecuting the pharmaceutical companies for their role in the opioid addiction epidemic!)

If any readers of The Bolen Report would like to submit their own questions to the Office of the Australian Information Commissioner, I provide you with their email as a public service.

Readers of The Bolen Report and those inspired by my most recent campaign have posted more than 50,000 comments to Trump’s proposed regulations regarding Conscience and Religious Freedom in Health-Care to demand that vaccines be specifically included in these new regulations.

Is it too much to ask that maybe 5,000 emails go to Australia, asking for clarification of their government’s relationship with Facebook?

Kent’s book PLAGUE was released by Skyhorse Publishing in 2014 and is now available in paperback.  Skyhorse also publishes the work of Mo Yan, the 2012 recipient of the Nobel Prize in literature.