New South Wales Health Minister Brad Hazzard wants HSC students to get along as soon as possible to Qudos Bank Arena and get jabbed with toxic and potentially lethal COVID clot shots.

Hazzard, who is an out of touch toilet rat, says that HSC students can “go for gold” and be an Olympic champion by getting an experimental mRNA shot in their arms that could lead to a Slew Of Neurological Degenerative Diseases and death.

“We’ve seen our Olympic stars go for gold, we’ve seen the most amazing stars in the Qudos Bank Arena … you have a chance to go to that stadium next week and actually land some gold by getting your first vaccination,” he said.

I have never heard such idiotic and dangerous propaganda in my life and that this is directed at healthy teenage HSC students is just disgusting beyond belief.

Brad Hazzard is a deranged monster and even uses music celebrities to push his vile COVID propaganda onto Australian children.

Brad Hazzard will not be there for any of these kids or their families who suffer or die after receiving experimental Pfizer shots so do not play into this criminals game of death. 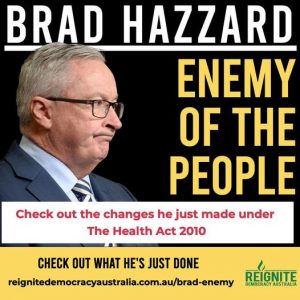 Boy, 13, dies in his sleep days after getting Pfizer vaccine

STUDY: Pfizer vaccine causes catastrophic damage to every system of your body

CDC Study on 12- to 17-Year-Olds Who Got Pfizer Vaccine: 397 Reports of Heart Inflammation, 14 Deaths