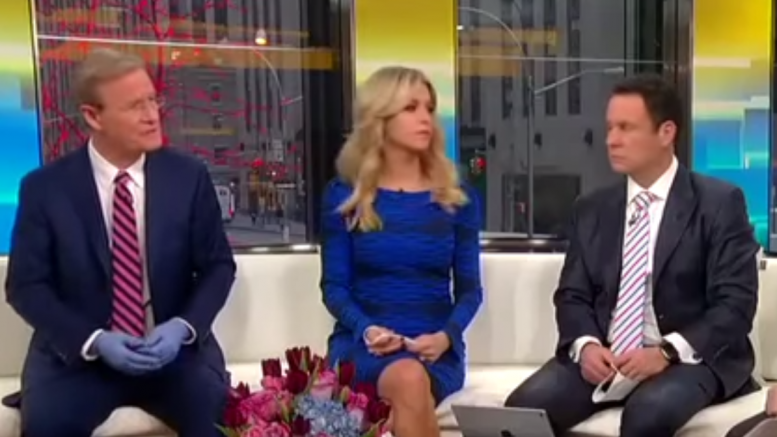 “Fox & Friends” co-host Brian Kilmeade upset the apple cart on Monday’s airing of the show when he declined the idea of getting a flu shot. The show’s guest was Dr. Marc Siegel, who is a regular Fox News contributor. Siegel was on the show to discuss the “bad flu season” when the conversation turned to flu shots, a subject that immediately sparked controversy when the Kilmeade made clear that neither he nor his daughters, get a flu shot. Kilmeade also commented that he believes his daughters should “build up their immunity.”

Siegel claimed he would get Kilmeade to accept the vaccine off-air, however, co-host Ainsley Earhardt made clear that Kilmeade would absolutely refuse.

Kilmeade: No, I have not gotten one.

Earhardt: He doesn’t get them.

Siegel: I’m going to try to give Brian one off the air.

Earhardt: He won’t do it.

Kilmeade: Only 30 percent, people are saying ?

Siegel: You have to protect your girls.

Kilmeade: Right. Alright, but they’ve got to build up their immunity, too.

As expected, liberal media strongholds lost their collective minds over the matter. The Huffington Post immediately condemned the idea that you can “build up immunity” sans a vaccine.

Kilmeade essentially told the show’s viewers ? of which there are an average 1.6 million, according to Nielsen ? that opting not to get a flu shot is a better way for people to “build up their immunity.” That’s just false, and spreading that type of misinformation to an audience that large is irresponsible and dangerous.

Apparently, a man thinking for himself and choosing his own medical treatments and shots is just too offensive. And dangerous.