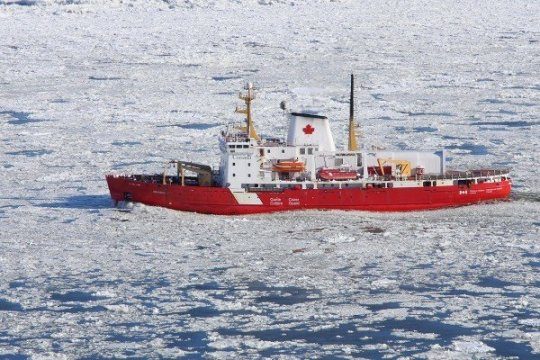 A large Canadian climate change expedition in the Arctic has been canceled because the ice is too thick. But the best part is that climate researchers are blaming global warming or climate change for ice that is so thick, it’s “unprecedented.”

Not enough ice? Global warming. Too much ice? Climate change. And these climate scientists wonder why skeptics don’t take them seriously. The Canadian climate change expedition was canceled because of “climate change” according to Science Daily.

The Science Team of the Canadian Research Icebreaker CCGS Amundsen has cancelled the first leg of the 2017 Expedition due to complications associated with the southward motion of hazardous Arctic sea ice, caused by climate change.

The study, entitled BaySys, is a $17-million four-year-long program headed by the University of Manitoba. It was planning to conduct the third leg of its research by sending 40 scientists from five Canadian universities out into the Bay on the Canadian Research Icebreaker CCGS Amundsen to study “contributions of climate change and regulation on the Hudson Bay system.”

The $17 million expedition then had to be canceled because the researchers’ icebreaker was required by the Canadian Coast Guard for something far more important. The ice breaker needed to rescue fishing boats and supply ships which had gotten stuck in the “unprecedented ice conditions.”

“It became clear to me very quickly that these weren’t just heavy ice conditions, these were unprecedented ice conditions,” Dr. David Barber, the lead scientist on the study, told VICE. “We were finding thick multi-year sea ice floes which on level ice were five metres thick… it was much, much thicker and much, much heavier than anything you would expect at that latitude and at that time of year.”

Of course, like any good researcher, instead of admitting that climate change might be the hoax that it is, he doubled down on the thickening ice as “man-made.” Barber took to fear mongering blaming the climate change expedition’s cancellation on climate change.  “It was clear it was from the Arctic, I just needed to be among the ice to see it,” said Dr. Barber. “What was also clear to me was that climate change has caused this event to happen.”

It’s time to pity those who can’t see past this fabricated propaganda. This is far from the only time global warming alarmists have been made to look foolish over their insistence on pushing this fabrication.

There was the Ship of Fools expedition in which an Australian climate researcher called Chris Turkey had to call an expedition to the melting Antarctic after his ship got stuck in the ice.

The Caitlin Expedition – supported by the Prince of Wales – in which Pen Haddow and his team had to abandon their trip to the North Pole because it was colder than they’d expected.

Most recently there was Ship of Fools II, in which a global warming research voyage by David Hempleman Adams had to be curtailed because of unexpected ice.

Global warming alarmists and climate change scientists are nothing more than money hungry quacks blaming everything from the wind to a tree dying in California on their invented science. This isn’t to say we shouldn’t take care of the earth. Leaving a clean planet with fresh air and water for future generations should be a goal. Yet the weather fluctuations being pushed off on people as some sort of excuse to tax and regulate them is getting asinine.

Contributed by Dawn Luger of The Daily Sheeple.