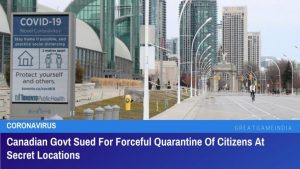 A legal group in Canada is planning to sue the federal Canadian government against the COVID-19 travel rule which is being used to quarantine citizens forcefully at secret locations.

Since the inception of the COVID-19 pandemic, almost all the countries have modified their travel rules, especially for immigrants. Similar COVID-19 travel rules were enforced by the Federal government in Canada.

However, one of the prominent legal groups, The Justice Centre for Constitutional Freedoms (JCCF), is not in favour of forced quarantine imposed as part of new travel rules.

The President of JCCF, John Carpay, gave a statement in a news releasesent out last Friday.

Read more: Police Take Traveling Woman Into Mandatory COVID Isolation In Canada – Won’t Tell Family Where They Are Holding Her

As per John Carpay:

“Quarantine, particularly of healthy or asymptomatic individuals, is the functional equivalent of house arrest and the Justice Centre will not allow it to continue unchallenged,”

“These citizens are being held unlawfully despite not having been convicted of any offence, not having had access to a lawyer, and not having appeared before a judge.”

“Law enforcement officers are apparently refusing to inform family members of where their loved ones are being held.”

“This outrageous policy aligns with the world’s most repressive and undemocratic regimes and is totally unacceptable.”

The JCCF confirmed that a legal action will be taken against the Federal government under Prime Minister Justin Trudeau.

The main reason behind this legal action is the fact that Canadian travelers are being quarantined in hotels.

Nikki Mathis, one Canadian citizen was forcefully quarantined in Canada when she returned from the U.S.

In spite of having a negative COVID-19 report with her, Mathis was sent to a quarantine hotel and its location was not known to her.

The reason told to her was that the report didn’t meet the parameters set by Canadian authorities.

However, the situation became worse when Canadian authorities didn’t inform even her husband about her quarantine location. This step was highly criticized on online platforms.

Many other travelers claimed that this medical isolation made them feel like prisoners.

Angelo Vanegas another victim said, “I feel like a prisoner in here, you know.”

Vanegas also added he was not supplied adequate food and was compelled to stay in a small room for 14 days.

The JCCF has announced a legal action to be taken against this 14 day isolation at secret locations.

As per COVID-19 travel rules enacted by Canadian Federal government, any travelers coming to Canada by air should have a negative PCR or LAMP COVID-19 report.

If travelers do not have these reports then they are sent to forced quarantine for 3 days at a secret location.

They are tested for COVID-19 during these 3 days. If the report is negative then these travelers are asked to self-isolate themselves in their homes.

Only four airports are allowed to service international flights and these are Calgary, Vancouver, Toronto, and Montreal.

According to the new restrictions for those entering Canada by air and land, it is mandatory to take “COVID-19 molecular test when they arrive in Canada before exiting the airport, and another toward the end of their 14-day quarantine period.”

However, travelers are still required to “reserve, prior to departure to Canada, a 3-night stay in a government authorized hotel.”

Travelers are also supposed to submit their “travel and contact information, including a suitable quarantine plan, electronically,” through the via ArriveCAN app “before crossing the border or boarding a flight.”

The JCCF says that its new legal action will include an affidavit from an Ontario resident named Steven Duesing.

Duesing was retained by the Justice Centre “after being forcibly detained for three days in a Toronto Raddison Hotel.”

Recently, the Hague Court ruled that the COVID-19 lockdown which was imposed by the Dutch Govt had no legal basis and that it was illegal. However, the Dutch appeals court overturned the ruling within hours arguing that they wanted to avoid what they called a “yo-yo effect,” referring to public confusion around whether the curfew was still in force.

In a similar ruling, a German court declared that COVID19 lockdowns imposed by the government are unconstitutional.

Recently, it was revealed that the German Interior Ministry hired scientists to develop fake coronavirus model in order to justify strict lockdown, according to extensive email exchanges obtained by a group of lawyers in a legal dispute.

A major lawsuit has also been filed against the PM of Denmark for strict COVID-19 restrictions and for killing almost 17 million minks.

Even the Belgian health experts have demanded an investigation into the WHO for faking a pandemic.

As reported by GreatGameIndia earlier, a three judge court in Peru has ruled that the COVID-19 pandemic was started by the billionaires Bill Gates, George Soros and Rockefeller.

In the past in 2010, the WHO was caught faking a pandemic and was forced to admit that its methodology of measuring the virality or the spread of the disease, instead of its severity was incorrect.