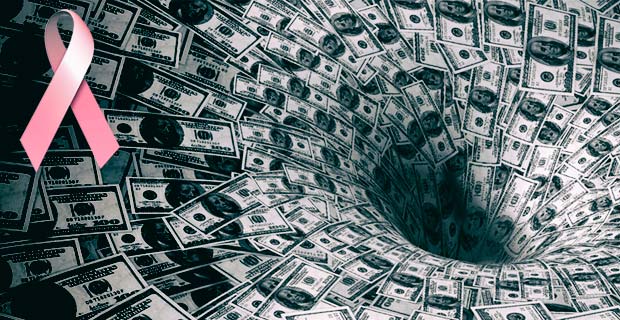 There were subscriptions to dating websites, meals at Hooters and purchases at Victoria’s Secret — not to mention jet ski joy rides and couples’ cruises to the Caribbean.

All of it was paid for with the nearly $200 million donated to cancer charities and was enjoyed by the healthy friends and family members of those running the groups, in what government officials said Tuesday was one of the largest charity fraud cases ever.

The other charities connected to Mr. Reynolds and named in the suit were Cancer Support Services, Children’s Cancer Fund of America and the Breast Cancer Society. According to government officials, the four groups spent the vast majority of the donations they received on fund-raising for more donations, reserving a portion for showering the groups’ workers and their friends with large salaries, bonuses, and lavish expenses.

The Federal Trade Commission has accused four cancer charities of defrauding well-meaning donors for over $187 million. Today, the FTC and law enforcement groups from all 50 states have filed a complaint against the Cancer Fund of America, Cancer Support Services, Children’s Cancer Fund of America, and the Breast Cancer Society. The complaint alleges that these four “sham charities” solicited millions in donations by promising to help pay for hospice care, chemotherapy, and other services for cancer patients. But only a fraction of that money actually went to patients. The rest went to company cars, high salaries, and even a Caribbean cruise.