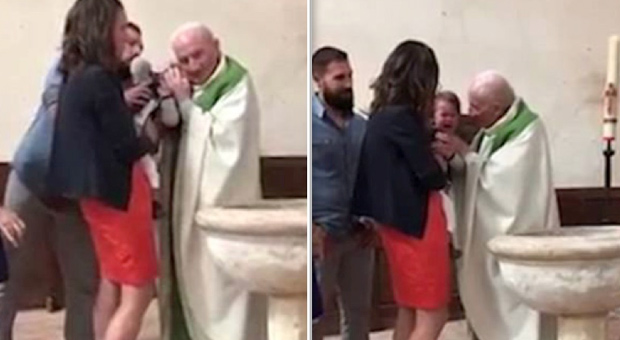 This is the sickening moment a French Catholic priest grabbed a terrified baby at baptism and slapped him in the face forcing the terrified parents to wrestle their child away.

The violent clergyman can be seen hitting the child fully in the face with his left hand after seemingly losing his temper when the child refused to stop crying during the ceremony.

The shocked and outraged parents witnessing the terrifying ordeal eventually step in the snatch their baby back from the priest.

The footage (below) was captured at an undisclosed Church in France, the identity of the priest is not yet known. A the beginning of the video, the priest can be seen trying to calm the child down before hitting him in the face after he wouldn’t stop crying.

The child was clearly not enjoying the Baptism process as the clergyman begins to look irritated saying “Calm Down, Calm down” translated from French.

The relatives still appear to be trying to remain calm as the priest snatches the bay’s head and pulls it towards him.

The baby reacts badly and flails his right arms towards the woman. The Priest then holds the baby’s face towards his hands, looks it in the eyes and slaps it hard on the cheek with his left hand, stunning both parents.