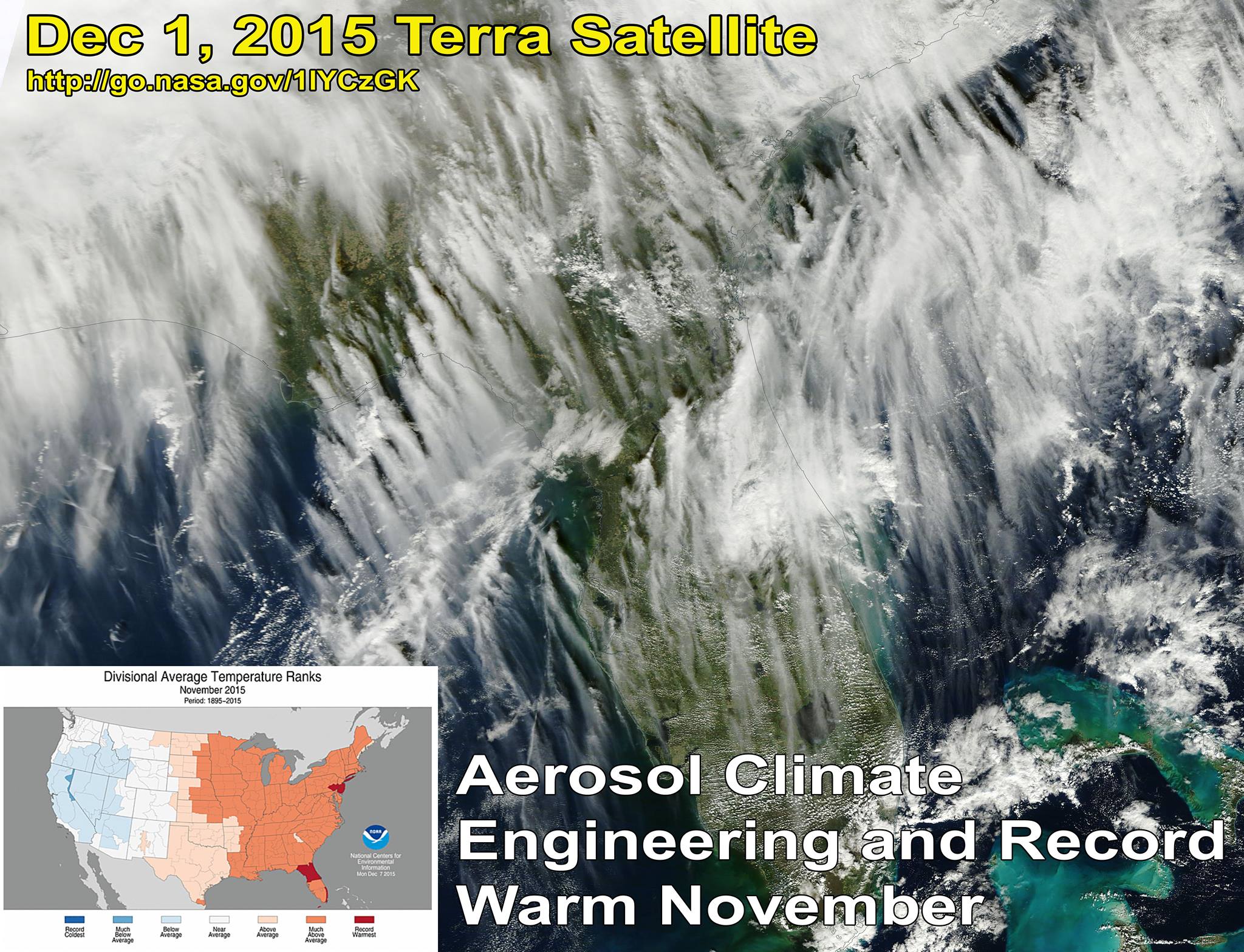 Aerosols intended for covert climate and hurricane engineering are deployed with nozzles and have nothing to do with fuel additives, contrails or engine emissions.

Bruce Douglas was an organizer for the Chemtrail/Geoengineering Symposium in April 27, 2012 held in Maui, Hawaii. Douglas is also the originator of the Maui Clean Sky Ordinance bill that was under review by Maui County Council member Ellie Cochran who supported such legislation at the time.

The ordinance stated that the people of the County of Maui recognize that geoengineers have proposed the global disbursement of aerosols and other particulates into the atmosphere for the stated goal of reversing the effects of global warming and cooling the planet. Supporters of the bill want geoengineers to notify and gain approval from the county with an environmental impact statement before spraying anything related to climate manipulation in Maui County skies.

Bruce’s presentation at the CBC conference brings new information that adds the term “chembombs” to “chemtrails” to describe a novel method of toxic aerosol deployment seen over Hawaii and globally with increasing frequency.

One suspect capable of of dropping “bombs” of aerosols is the spray system featured in the B-747 tanker patented by Evergeen Air – a company with a dark history of association with the CIA and covert chemtrail ops. In 2014, Evergreen Air filed for bankruptcy, however the patent spray device still exists and can be installed in other aircraft types as specified in the patent literature.

Another suspect is the Hercules, C-130 equipped with the Modular Airborne FireFighting System (MAFFS) that is easily adaptable to large volume aerosol dumps into the Cirrus level of the troposphere. Equipped with the MAFFS pressurized system, these aircraft have the capacity to deploy LARGE VOLUME AEROSOLS PLUMES (LVAP) to potentially control rainfall, drought and change the intensity of tropical cyclones. The 2009 NOAA/DHS publication on the Hurricane Aerosols Microphysics Program (HAMP) describes hurricane mitigation and/or intensification by deploying aerosols inside the circulation of tropical cyclones. Published as: The Rise and Fall of THE HURRICANE AEROSOL AND MICROPHYSICS PROGRAM

The following video demonstrates the capability of the C-130H to deploy large volumes of aerosols. We need to wonder why this aircraft is almost never seen or featured in the news as actually fighting a forest fire. Is it because they are all deployed to spray aerosols in the covert climate engineering program? During the interview notice how NORTHCOM commander, Gen. Renuart lists “infectious disease control” as just one of the various missions for the MAFFS system.

CAPTION: Posted May 9, 2010 Produced by SSgt Burt Traynor Courtesy: Third Army/U.S. Army Central/ARCENT – Civilian and military personnel in Greenville, SC April 26th to May 1st, 2010 for certification and recurrent training in the Modular Airborne Fire Fighting System (MAFFS) program. MAFFS is a partnership between federal land management agencies and the military to provide supplemental air tankers to assist in fire suppression efforts nationwide during times of high activity. Scenes include a C-130H, with a Legacy MAFFS system, and a C-130J, with a MAFFS II system, perform an aerial demonstration for local media outlets. Gen. Renuart, U.S NORTHCOM commander, is briefed on the C-130J aircraft with the MAFFS II sytem. Gen. Renuart comments on the MAFFS exercise. Gen. Renuart greets a delegation from Thailand’s Royal Thai Air Force, which was observing the MAFFS exercise. (source video)

For more information and to keep updated on the status of the Maui Clean Sky Ordinance, visit the Maui Skywatch website

Both the Evergreen and MAFFS systems are capable of deploying atmospheric aerosols that fit the description of Plumes or “Chem-Bombs” – a term coined by Bruce Douglas.

In 2010, Shepard Ambellas – Investigative journalist for the The Intel Hub – interviewed a former Evergreen Air employee (now whistleblower) who verified his work history at the Pinal County Arizona facility with documentation.

The former employee reported that Evergreen was involved in retro-fitting Boeing 727 and 747-c aircraft with liquid discharge tanks and aerosol sprayer devices.

An Evergreen Air 747 Supertanker can re-fuel and re-fill disbursal tanks with mission specific chemical agents at any of the 50 military bases in the CONUS.

Evergreen’s photo album once included a scenario demonstrating a fleet of supertankers spraying aerosols over New York City. This photo was removed from the site in 2012.

Another concept involves aircraft dropping… “thousands of tons of a water-absorbing powder (Dyn-O-Gel) onto a hurricane to extract moisture from rain clouds.
Dyn-O-Mat’s founder and CEO, Peter Cordani, has already arranged to lease a specially rigged 747 “supertanker” to conduct trials on actual hurricanes” – PopSci – 11/2005

Evergreen Patent for Delivery of Aerosols

Fire-fighting competition from “10 Tanker Air Carrier” in Aug, 2012 even though USFS has not contracted with fist bidder, Evergreen Air. Curiously, 10TankerAir is seeking and exclusive contract.

In 2009 Los Angeles calls Evergreen 747 Supertanker to put out the fire but still no contract with US Forest Service in 2012 to contain numerous, deadly wildfires.

Cloud Seeding: A Geo-Engineered Response to Climate Change?  Yale scientist Trude Storelvmo recently tested this thought experiment with a global climate model.  At the YCEI forum, Professor Storelvmo shared how releasing aerosols in mid to high latitude regions could cool surface temperatures to pre-industrial levels.  Her model results show that the interactions of cirrus clouds and aerosol particles, such as mineral dust or bismuth tri-iodide, can reduce cloud lifetimes and their warming effects on Earth.   (Note: Possibilities of “mineral dust” can include Jet fuel engine emissions and/or recycled “coal ash”.)

Cirrus cloud seeding: a climate engineering mechanism with reduced side effects?   Here, we present a global modelling study of a so far understudied CEM, namely the seeding of cirrus clouds to reduce their lifetimes in the upper troposphere, and hence their greenhouse effect.

US Patent 4,686,605 – Bernard Eastlund, 1987
This invention has a phenomenal variety of possible ramifications and potential future developments. As alluded to earlier, missile or aircraft destruction, deflection, or confusion could result, particularly when relativistic particles are employed. Also, large regions of the atmosphere could be lifted to an unexpectedly high altitude so that missiles encounter unexpected and unplanned drag forces with resultant destruction or deflection of same. Weather modification is possible by, for example, altering upper atmosphere wind patterns or altering solar absorption patterns by constructing one or more plumes of atmospheric particles which will act as a lens or focusing device. Also as alluded to earlier, molecular modifications of the atmosphere can take place so that positive environmental effects can be achieved. Besides actually changing the molecular composition of an atmospheric region, a particular molecule or molecules can be chosen for increased presence. For example, ozone, nitrogen, etc. concentrations in the atmosphere could be artificially increased. Similarly, environmental enhancement could be achieved by causing the breakup of various chemical entities such as carbon dioxide, carbon monoxide, nitrous oxides, and the like. Transportation of entities can also be realized when advantage is taken of the drag effects caused by regions of the atmosphere moving up along diverging field lines. Small micron sized particles can be then transported, and, under certain circumstances and with the availability of sufficient energy, larger particles or objects could be similarly affected. Particles with desired characteristics such as tackiness, reflectivity, absorptivity, etc., can be transported for specific purposes or effects. For example, a plume of tacky particles could be established to increase the drag on a missile or satellite passing therethrough. Even plumes of plasma having substantially less charged particle density than described above will produce drag effects on missiles which will affect a lightweight (dummy) missile in a manner substantially different than a heavy (live) missile and this affect can be used to distinguish between the two types of missiles. A moving plume could also serve as a means for supplying a space station or for focusing vast amount of sunlight on selected portions of the earth. Surveys of global scope could also be realized because the earth’s natural magnetic field could be significantly altered in a controlled manner by plasma beta effects resulting in, for example, improved magnetotelluric surveys. Electromagnetic pulse defenses are also possible. The earth’s magnetic field could be decreased or disrupted at appropriate altitudes to modify or eliminate the magnetic field in high Compton electron generation (e.g., from high altitude nuclear bursts) regions. High intensity, well controlled electrical fields can be provided in selected locations for various purposes. For example, the plasma sheath surrounding a missile or satellite could be used as a trigger for activating such a high intensity field to destroy the missile or satellite. Further, irregularities can be created in the ionosphere which will interfere with the normal operation of various types of radar, e.g., synthetic aperture radar. The present invention can also be used to create artificial belts of trapped particles which in turn can be studied to determine the stability of such parties. Still further, plumes in accordance with the present invention can be formed to simulate and/or perform the same functions as performed by the detonation of a “heave” type nuclear device without actually having to detonate such a device. Thus it can be seen that the ramifications are numerous, far-reaching, and exceedingly varied in usefulness.