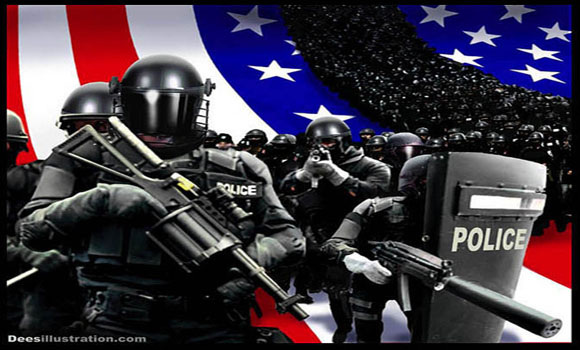 The nation’s young people have been given front-row seats for an unfolding police drama that is rated R for profanity, violence and adult content.

In Arizona, a 7-year-old girl watched panic-stricken as a state trooper pointed his gun at her and her father during a traffic stop and reportedly threatened to shoot her father in the back (twice) based on the mistaken belief that they were driving a stolen rental car.

In Oklahoma, a 5-year-old boy watched as a police officer used a high-powered rifle to shoot his dog Opie multiple times in his family’s backyard while other children were also present. The police officer was mistakenly attempting to deliver a warrant on a 10-year-old case for someone who hadn’t lived at that address in a decade.

In Maryland, a 5-year-old boy was shot when police exchanged gunfire with the child’s mother—eventually killing her—over a dispute that began when Korryn Gaines refused to accept a traffic ticket for driving without a license plate on her car.

It’s difficult enough raising a child in a world ravaged by war, disease, poverty and hate, but when you add the police state into the mix, it becomes near impossible to guard against the growing unease that some of the monsters of our age come dressed in government uniforms.

The lesson being taught to our youngest—and most impressionable—citizens is this: in the American police state, you’re either a prisoner (shackled, controlled, monitored, ordered about, limited in what you can do and say, your life not your own) or a prison bureaucrat (politician, police officer, judge, jailer, spy, profiteer, etc.).

Unfortunately, now that school is back in session, life is that much worse for the children of the American police state.

The nation’s public schools—extensions of the world beyond the schoolhouse gates, a world that is increasingly hostile to freedom—have become microcosms of the American police state, containing almost every aspect of the militarized, intolerant, senseless, over criminalised, legalistic, surveillance-riddled, totalitarian landscape that plagues those of us on the “outside.”

If your child is fortunate enough to survive his encounter with the public schools with his individuality and freedoms intact, you should count yourself fortunate.

Most students are not so lucky.

From the moment a child enters one of the nation’s 98,000 public schools to the moment he or she graduates, they will be exposed to a steady diet of

Clearly, instead of making the schools safer, we have managed to make them more authoritarian.

Young people in America are now first in line to be searched, surveilled, spied on, threatened, tied up, locked down, treated like criminals for non-criminal behavior, tasered and in some cases shot.

It used to be that if you talked back to a teacher, or played a prank on a classmate, or just failed to do your homework, you might find yourself in detention or doing an extra writing assignment after school.

That is no longer the case.

Nowadays, students are not only punished for minor transgressions such as playing cops and robbers on the playground, bringing LEGOs to school, or having a food fight, but the punishments have become far more severe, shifting from detention and visits to the principal’s office into misdemeanor tickets, juvenile court, handcuffs, tasers and even prison terms.

For instance, a Virginia sixth grader, the son of two school teachers and a member of the school’s gifted program, was suspended for a year after school officials found a leaf (likely a maple leaf) in his backpack that they suspected was marijuana. Despite the fact that the leaf in question was not marijuana (a fact that officials knew almost immediately), the 11-year-old was still kicked out of school, charged with marijuana possession in juvenile court, enrolled in an alternative school away from his friends, subjected to twice-daily searches for drugs, and forced to be evaluated for substance abuse problems.

Look-alike weapons (toy guns—even Lego-sized ones, hand-drawn pictures of guns, pencils twirled in a “threatening” manner, imaginary bows and arrows, even fingers positioned like guns) can also land a student in hot water.

Acts of kindness, concern or basic manners can also result in suspensions. One 13-year-old was given detention for exposing the school to “liability” by sharing his lunch with a hungry friend. A third grader was suspended for shaving her head in sympathy for a friend who had lost her hair to chemotherapy. And then there was the high school senior who was suspended for saying “bless you” after a fellow classmate sneezed.

Consider that by the time the average young person in America finishes their public school education, nearly one out of every three of them will have been arrested.

More than 3 million students are suspended or expelled from schools every year, often for minor misbehavior, such as “disruptive behavior” or “insubordination.” Black students are three times more likely than white students to face suspension and expulsion.

In South Carolina, where it’s against the law to disturb a school, more than a thousand students a year—some as young as 7 years old—“face criminal charges for not following directions, loitering, cursing, or the vague allegation of acting ‘obnoxiously.’ If charged as adults, they can be held in jail for up to 90 days.”

Moreover, just as militarized police who look, think and act like soldiers on a battlefield have made our communities less safe, the growing presence of police in the nation’s schools is resulting in environments in which it’s no longer safe for children to act like children.

Thanks to a combination of media hype, political pandering and financial incentives, the use of armed police officers to patrol school hallways has risen dramatically in recent years. Funded by the U.S. Department of Justice, these school resource officers have become de facto wardens in elementary, middle and high schools, doling out their own brand of justice to the so-called “criminals” in their midst with the help of tasers, pepper spray, batons and brute force.

The horror stories are legion.

One school police officer was accused of punching a 13-year-old student in the face for cutting the cafeteria line. That same cop put another student in a chokehold a week later, allegedly knocking the student unconscious and causing a brain injury. In Pennsylvania, a student was tasered after ignoring an order to put his cell phone away.

Defending the use of handcuffs and pepper spray to subdue students, one Alabama police department reasoned that if they can employ such tactics on young people away from school, they should also be permitted to do so on campus.

Now advocates for such harsh police tactics and weaponry will tell you that school safety should be our first priority.

What they might fail to mention in their zeal to lock down the schools are the lucrative, multi-million dollar deals being cut with military contractors to equip school cops with tasers, tanks, rifles and $100,000 shooting detection systems.

Indeed, the militarization of the police has been mirrored in the public schools, where school police have been gifted with high-powered M16 rifles, MRAP armored vehicles, grenade launchers, and other military gear. One Texas school district even boasts its own 12-member SWAT team.

According to one law review article on the school-to-prison pipeline, “Many school districts have formed their own police departments, some so large they rival the forces of major United States cities in size. For example, the safety division in New York City’s public schools is so large that if it were a local police department, it would be the fifth-largest police force in the country.”

The term “school-to-prison pipeline” refers to a phenomenon in which children who are suspended or expelled from school have a greater likelihood of ending up in jail.

What we’re grappling with, you see, is not merely a public school system that resembles a prison and is treating young people like prisoners but also a profit-driven system of incarceration has given rise to a growth in juvenile prisons and financial incentives for jailing young people.

Indeed, young people have become easy targets for the private prison industry, which profits from criminalizing childish behavior and jailing young people. Nearly 40 percent of young people who are arrested will serve time in a private prison, where the emphasis is on making profits for large megacorporations above all else.

It has been said that America’s schools are the training ground for future generations.

Instead of raising up a generation of freedom fighters, however, we seem to be busy churning out newly minted citizens of the American police state who are being taught the hard way what it means to comply, fear and march in lockstep with the government’s dictates.

As I point out in my book Battlefield America: The War on the American People, it’s getting harder by the day to convince young people that we live in a nation that values freedom and which is governed by the rule of law.

With every school police raid and overzealous punishment that is carried out in the name of school safety, the lesson being imparted is that Americans—especially young people—have no rights at all against the state or the police.

The bottom line is this: if you want a nation of criminals, treat the citizenry like criminals.

If you want young people who grow up seeing themselves as prisoners, run the schools like prisons.

But if you want to raise up a generation of freedom fighters, who will actually operate with justice, fairness, accountability and equality towards each other and their government, then run the schools like freedom forums. Remove the metal detectors and surveillance cameras, re-assign the cops elsewhere, and start treating our nation’s young people like citizens of a republic and not inmates in a police state.

One thought on “Children of the American police state: Just another brick in the wall”