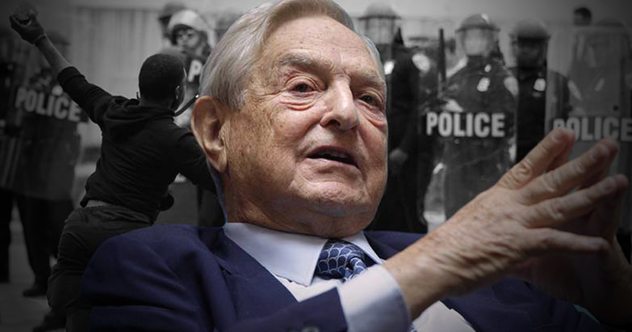 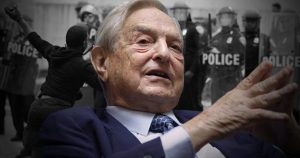 The group Centro Sin Fronteras, a parent group to caravan organizer Pueblo Sin Fronteras, is reportedly a “mainstay” of the caravan effort. The Centro has received funding from the George Soros-financed National Immigration Forum.

So let’s break down the Soros cash flow, which is somewhat hidden but actually very easy to find if you pull on the threads.

Centro Sin Fronteras (“Sin Fronteras” for short) makes it clear on its website that it is the parent organization of Familia Latina Unida.

The website states (emphasis added): “Sin Fronteras organized marches every year and fought deportations on a case by case basis through its legal program. Many of these cases involved the separation of families with U.S. citizen children. When Elvira Arellano joined Sin Fronteras afer her arrest in 2001, Sin Fronteras formed Familia Latina Unida which soon grew to include hundreds of families facing separation. Together they testified in the city council, the county board and the state legislature winning formal support from those institutions as well as from the Mayor of Chicago and the governor of Illinois.”

Capital Research Center reports: “But who is Pueblo Sin Fronteras, anyway? The group appears to be a remnant of the now-defunct 501(c)(4) La Familia Latina Unida(“The United Latin Family”), a Chicago, Illinois-based illegal immigration advocacy group formed in 2001 by illegal immigrant and activist Elvira Arellano. The two groups are regularly listed side-by-side with each other and have overlapping staff. The groups claim to have organized approximately 1,000 economic migrants from Central America to cross the U.S. and Mexican borders illegally since 2010 (prior to most of the caravans). They also share the same Chicago address (2176 W. Division St., Chicago, Illinois, 60622), which is also the same address as the Adalberto Methodist Church in which Arellano once hid from U.S. immigration authorities prior to founding La Familia Latina Unida.”

Centro Sin Fronteras has received funding from the National Immigration Forum, which is financed by George Soros’ Open Society Foundations.

Influence Watch reported, citing the Centro’s Form 990’s: “In 2010, the National Immigration Forum reported giving $60,000 to the Center. The Forum, in turn, receives funding from a number of major left-wing grantmaking foundations, including the Open Society Foundations and MacArthur, Ford, and RockefellerFoundations.”

LifeZette reported that Centro, the Soros-funded parent organization, is the “mainstay” of the caravan effort:

“Ludwig told LifeZette that Pueblo Sin Fronteras has to be viewed in connection with a related group, the Centro Sin Fronteras (Center Without Borders), which “is the mainstay behind the illegal immigrant caravans. The nonprofit was founded in Chicago in 1987 by Emma Lozano, a pastor at the city’s Lincoln United Methodist Church.”

The church, Ludwig said, “is a hotspot for left-wing activists and where other pro-illegal immigration groups such as the League of United Latin American Citizens(LULAC) and Make the Road New York have co-hosted events with her to help illegal immigrants register for” the federal government’s Deferred Action for Childhood Arrivals (DACA) program.

But the link between the two seemingly unconnected Fronteras groups goes even further, according to Ludwig.

“The center appears to coordinate much of the caravan activity through Pueblo Sin Fronteras (“People Without Borders”), a project of the center affiliate La Familia Latina Unida (The United Latin Family).”

“La Familia Latina Unida is a 501(c)(4) activist front created in 2001 by Lozano and the illegal immigrant Elvira Arellano, who is listed as the group’s president. Arellano was deported in 1997; she returned a few days later, and continued working in the U.S. under a fake Social Security number before joining the center around 2001 as a refugee hiding from immigration officials in the Adalberto United Methodist Church in Chicago (a church closely connected to Lozano’s).’”

Viridiana Vidal was listed as point of contact on an October 21 Pueblo Sin Fronteras press release.

The Daily Beast reported on October 25: “One of the Pueblo Sin Fronteras organizers, Viridiana Vidal, told The Daily Beast unofficially that by Wednesday night the caravan had grown to 10,000 and “some were still coming across the bridge from Guatemala to Mexico.” The ragged procession stretched for miles. Those at the front were the ones gaining speed and would be the first to reach Mexico City, days ahead of the tail-end of the caravan.”

Vidal was also identified by The Hill as a “representative for Pueblo Sin Fronteras, a group that provides logistical aid to migrant caravans like the one currently traveling north through Mexico…” Vidal told the newspaper about the violence in Honduras driving migration northward.

Who is Viridiana Vidal? She used to work for Telemundo and Univision.

Vidal’s LinkedIn profile lists her as the current Nevada state director for America’s Voice, since 2016.

Vidal wrote an op-ed in 2016 claiming that President Donald Trump’s supposed racism made her switch from a career in journalism to a career in activism, and identifies her as “the state director for Nevada’s Voice, a project of the national immigration reform organization America’s Voice.”

Soros gave $3 million to the Immigrant Voters Win PAC, becoming the PAC’s first and primary donor. That PAC has financed America’s Voice through a six-figure consulting re-imbursement and has also funded the top executives at America’s Voice.

The Free Beacon reported: “The PAC disclosed $135,000 in federal operating expenditures, with much of the money going toward salaries to individuals at America’s Voice, an immigration organization that fights for “A direct, fair, and inclusive road to citizenship for immigrants in the United States without papers.” The PAC also disclosed a six-figure reimbursement to the group.

Matt Hildreth, the political director of America’s Voice, first received payments from the Immigrant Voters Win PAC on June 21. On that day, three transactions marked “salary” are shown to his name in the amounts of $8,541, $8,541, and $10,541.

Frank Sharry, the founder and executive director of America’s Voice, also received three payments from the PAC on June 21. Sharry received payments of $2,165, $2,165, and $6,265 from the PAC, according to the documents.

Lynn Tramonte, the third person from America’s Voice who received a salary from the PAC, is the group’s deputy director and also works as deputy director of America’s Voice Education Fund, whichseeks to “educate the public about immigration policy, specifically to advance immigration reform that values citizenship and integration of immigrants mainstream into society.”

The Soros links don’t stop there.

“In 2017, OSF U.S. Programs deployed a three-pronged funding effort to support this new strategy. First, it made about half a million dollars in rapid response grants to organizations2 tackling refugee and asylum seeker organizing, advocacy, communications, and coordination in the United States. Second, a grant was renewed to a refugee organizer in a large refugee-receiving state and a new grant was made to support impact litigation on the travel ban announced by the Trump administration.3 Third, several existing grantees received additional support to ensure they had the capacity and resources
to advocate on behalf of refugees and asylum seekers in addition to immigrants.4”

David Mehew: This Rockefeller ghoul looks more decrepid with each passing day. No ...
Chloe: Thanks for sharing your insights on this podcast. Just came across you...
@gus: Boris is looking to increase his pay cheque. It's not about morals bu...
@gus: Absolutely!.... we are approaching a submissive society controlled by ...
SouthOzMan: Another great yarn! What is your twitter name Donna? Cheers! https...
David Mehew: Where did you learn this? I understand the vaccine vial to have somet...
@gus: Capitalism is flawed and is failing. The fourth industrial revolution...
@gus: We are coming into a period of servility or slavery controlled by the ...
Zac: Always good having Jason on 😃...
anon: To the Globalists: 18 Pride goeth before destruction, and an haught...