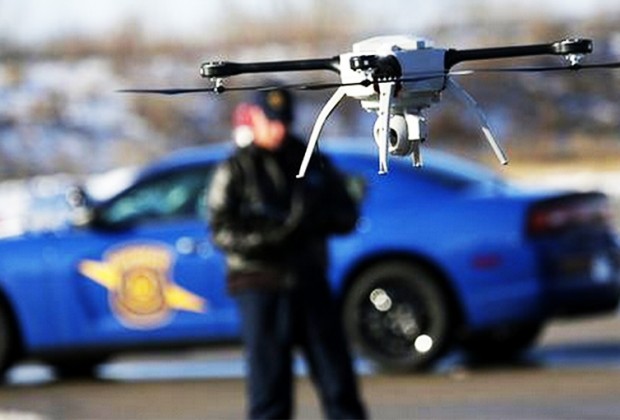 It was only a matter of time. On Thursday, the Associated Press reported that lawmakers in Connecticut are currently considering allowing police to use weaponized drones.

“Connecticut lawmakers are considering whether the state should become the first in the country to allow police to use drones outfitted with deadly weapons,” AP writes, “a proposal immediately met with concern by civil rights and liberties advocates.”

The proposed bill, which overwhelmingly passed in the state’s Judiciary Committee and will now head to the House floor, would ban the use of weaponized drones for everyone but police. Rules on how and when cops could use armed drones would be established by the state Police Officer Standards and Training Council (POSTC).

The conclusion of POSTC’s mission statement on its government website reads:

The Police Officer Standards and Training Council conducts its activities, for the most part, at its Meriden, Connecticut facility known as THE CONNECTICUT POLICE ACADEMY.

So the rules of engagement regarding the police’s use of deadly drones would be written by the police themselves. That’s a fact worthy of consideration when rolled up with the rest of what ACLU’s David McGuire calls a potentially “dangerous precedent.”

“It is really concerning and outrageous that that’s being considered in our state legislature,” he told AP. “Lethal force raises this to a level of real heightened concern.”Unsurprisingly, supporters of the bill claim cops would use these armed machines in a limited capacity and only in specialized situations.

“Obviously this is for very limited circumstances,” said state senator John Kissel, co-chairman of the Judiciary Committee. “We can certainly envision some incident on some campus or someplace where someone was a rogue shooter or someone was kidnapped and you try to blow out a tire.”

Another state senator, however, calls bunk on the notion of cops only using a weaponized drone to do things like blow out tires.

“I think that police are taught one thing,” says Edwin Gomes. “You put a weapon in their hand, they shoot center mass, they shoot to kill. If it’s going to be used, you’re going to use it to kill somebody.”

Last year, in Dallas, Texas, much was made of the police force’s use of an armed robot to kill a suspect who had just murdered five cops. That incident was widely considered to be the first time a civilian police force had used robotics to kill someone.

Indeed, that a state body is considering such a bill in the first place is truly a sign of the times. On Wednesday, for instance, Bloomberg ran a piece titled “Fears Grow of Terror in U.S. With Weaponized Civilian Drones.” From that article:

As millions of light-weight drones flood the consumer market and the federal government struggles with monitoring the devices, counter-terror agencies now see a possibility that they could be used in the U.S. to carry explosives, or as surveillance platforms, according to officials at a security conference in Washington on Wednesday.

No doubt, in the coming days — regardless of whether the bill in Connecticut survives — police forces and legislative bodies around the nation will use news items such as this to justify moves like the one now being made in Connecticut. Police in North Dakota are already allowed to use armed drones, though the use is limited to supposedly “less than lethal” weapons such as stun guns and rubber bullets.

At the end of the day, though, it was really only a matter of time until the American people would have to deal with the prospect of armed drones of the State circling overhead.

And it seems that time has come.

Also Read: India to Use Weaponized Drones For Crowd Control