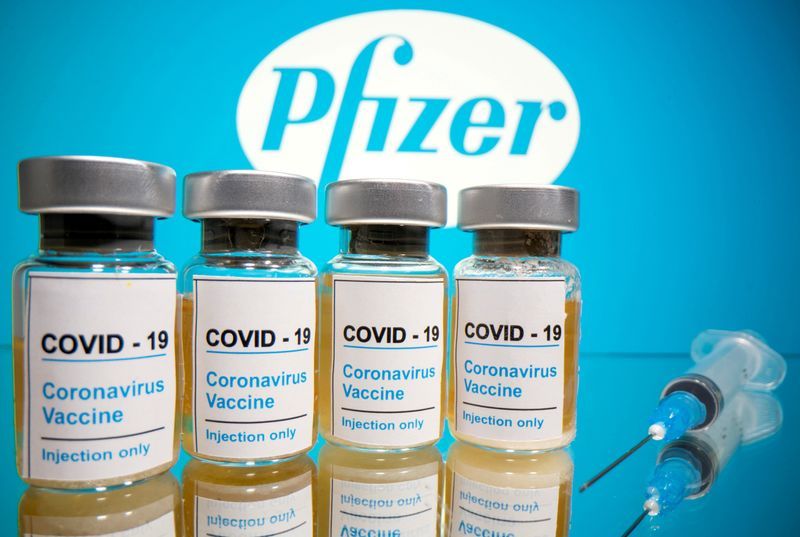 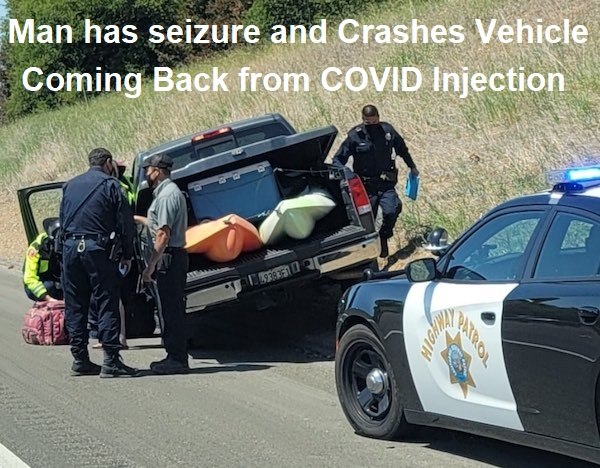 A California man reportedly crashed his vehicle after suffering a seizure driving back from receiving his second injection of a COVID-19 shot.

The California Highway Patrol has responded with a statement regarding the accident that occurred on Highway 101 Northbound on Friday in Atascadero.

According to Officer Jose Meza of the CHP, on Thursday at 1:40 p.m. on Highway-101 Northbound, North of San Anselmo Rd, a 73-year-old driver driving a Nissan Titan suffered an unknown medical event.

Per his wife (right-front passenger), he went blank and started holding his chest. He started braking and his wife steered the vehicle to the shoulder of the road. A semi-truck clipped the Nissan as it was slowing.

The wife forced the Nissan’s gear into park and came to a stop. The driver was transported to Twin Cities Hospital, CHP reports.

According to a California Highway Patrol incident record, the driver’s spouse reported that they were on their way home from receiving a second dose of the COVID-19 vaccine. A second vehicle that was involved in the accident reportedly left the area. (Full story.)

A man with a Bitchute channel called “clif_high” has coined a new term to describe the times we are currently living in as over 1 billion people around the world have now been injected with the experimental COVID shots: “Vaxxxidents.” 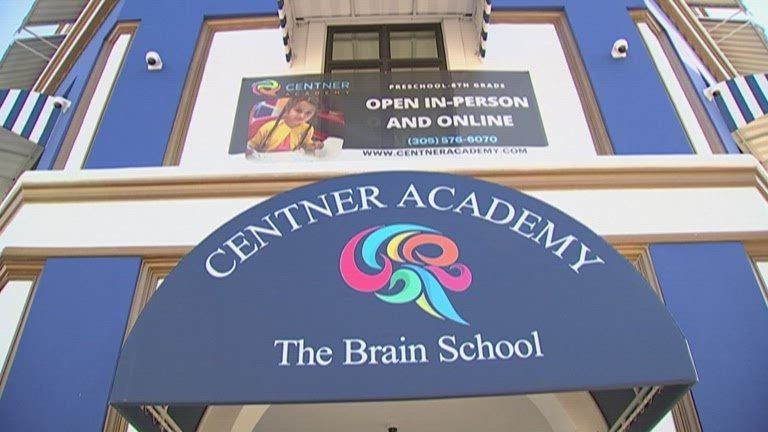 Meanwhile, evidence continues to mount that COVID injected individuals are somehow infecting those who have not received the injections. See:

Women Complaining of Severe Menstrual Disorders post COVID Injections – Even if They Did Not Get the Shots!

URGENT! 5 Doctors Agree that COVID-19 Injections are Bioweapons and Discuss What to do About It

The owners of the school are being vilified in the corporate media, but it is a bold move to protect the students and other school staff from the risk of being infected from those who chose to take the experimental shots.

It shows, to me at least, that the administrators of this school are willing to face public scorn and potential lawsuits because they value the health and lives of their students and staff more than the public disgrace that comes when one dares to expose Big Pharma and their lies.

Centner Academy has campuses in the Miami area, and Leila Centner, the CEO and co-founder of Centner Academy, sent the following letter to staff members and parents.

The health and safety of our students has, and remains, our #1 priority at Centner Academy, the first happiness school in the US which draws on the latest research in the fields of mindfulness, emotional intelligence and the science of happiness.

For example, on March 16, 2020, at the very onset of COVID in the US, Centner Academy was the first school in Miami, and one of the first in the country, to close in-person classes and fully pivot to online learning.

Subsequently, on September 8, 2020, we fully opened in-person, while many schools around the country remained online, and still do to this day. We weighed the data and studied the research. We knew then that children had a 99.9974% survival rate and children were not super spreaders. We also studied the increase in suicide rates and related emotional issues due to the lockdowns and children being required to remain learning online.

Our responses and actions have consistently been out of an abundance of caution and thoughtful decision-making when risks to our children are presented. This includes physical as well as mental health risks.

Anecdotally, tens of thousands of women all over the world have recently been reporting adverse reproductive issues simply from being in close proximity with those who have received any one of the COVID-19 injections, e.g., irregular menses, bleeding, miscarriages, post-menopausal hemorrhaging, and amenorrhea (complete loss of menstruation).

No one knows exactly what may be causing these irregularities, but it appears that those who have received the injections may be transmitting something from their bodies to those with whom they come in contact. Until more is known, we must err on the side of caution when it comes to the welfare of our students and the school team.

We are not 100% sure the COVID injections are safe and there are too many unknown variables for us to feel comfortable at this current time.

This injection is still classified as an experimental drug and is not scheduled for FDA approval until at least 2023. We can re-evaluate our decision once more is known about the drug, if and when it passes FDA approval. As many of you may be aware, this injection is known to have issues. This injection is an experiment. See the links below to see adverse events reported on the U.S. government website VAERS (Vaccine Adverse Event Reporting System) since the general public began taking the injection:

“Underreporting” is one of the main limitations of passive surveillance systems, including VAERS. The term underreporting refers to the fact that VAERS receives reports for only a small fraction of actual adverse events. VAERS is a government database managed by the Centers for Disease Control and Prevention.

When it comes to human health, it’s very personal.  This injection is still classified as an experimental drug.  It is not scheduled  for FDA approval until at least 2023.  We know not everyone agrees on this topic, but this is our philosophy at Centner Academy, one in which many of our teachers and parents share.

It’s no secret that education systems around the world are facing challenges in preparing students to deal with the demands of unpredictable circumstances related to COVID-19.

At Centner Academy, we are teaching children how to navigate change and become emotional ninjas, while keeping them healthy and safe physically, mentally, and emotionally.

Now do a search for Leila Centner in any search engine and see what the corporate media is saying about this woman, compared to what she actually wrote and stated was their policy.

Did Pfizer Know During Trials that their mRNA Injection Would Transmit Infection to Others?

A document published by Pfizer during their trials of their COVID-19 mRNA shots is making its way around the Internet today where it appears that they warned participant members of coming in contact with others not part of the trial, including pregnant women.

The title of the document is: “PF-07302048 (BNT162 RNA-Based COVID-19 Vaccines)”. It can be found in many places on the Internet right now, including the New England Journal of Medicine.

Here are some of the sections from the document that appear to warn about transmission from test participants to those who were not part of the trials.

8.3.5. Exposure During Pregnancy or Breastfeeding, and Occupational Exposure

Exposure to the study intervention under study during pregnancy or breastfeeding and occupational exposure are reportable to Pfizer Safety within 24 hours of investigator awareness.

An EDP occurs if:

The investigator must report EDP to Pfizer Safety within 24 hours of the investigator’s awareness, irrespective of whether an SAE has occurred. The initial information submitted should include the anticipated date of delivery (see below for  information related to termination of pregnancy).

• If EDP occurs in a participant or a participant’s partner, the investigator must report this information to Pfizer Safety on the Vaccine SAE Report Form and an EDP Supplemental Form, regardless of whether an SAE has occurred. Details of the pregnancy will be collected after the start of study intervention and until 6 months after the last dose of study intervention.
• If EDP occurs in the setting of environmental exposure, the investigator must report information to Pfizer Safety using the Vaccine SAE Report Form and EDP Supplemental Form. Since the exposure information does not pertain to the participant enrolled in the study, the information is not recorded on a CRF; however, a copy of the completed Vaccine SAE Report Form is maintained in the investigator site file.

Follow-up is conducted to obtain general information on the pregnancy and its outcome for all EDP reports with an  unknown outcome. The investigator will follow the pregnancy until completion (or until pregnancy termination) and notify Pfizer Safety of the outcome as a follow-up to the initial EDP Supplemental Form. In the case of a live birth, the structural integrity of the neonate can be assessed at the time of birth. In the event of a termination, the reason(s) for termination should be specified and, if clinically possible, the structural integrity of the terminated fetus should be assessed by gross visual inspection (unless preprocedure test findings are conclusive for a congenital anomaly and the findings are reported).

Abnormal pregnancy outcomes are considered SAEs. If the outcome of the pregnancy meets the criteria for an SAE (ie, ectopic pregnancy, spontaneous abortion, intrauterine fetal demise, neonatal death, or congenital anomaly), the investigator should follow the procedures for reporting SAEs. Additional information about pregnancy outcomes that are reported to Pfizer Safety as SAEs follows:

• Spontaneous abortion including miscarriage and missed abortion;
• Neonatal deaths that occur within 1 month of birth should be reported, without regard to causality, as SAEs. In addition,  infant deaths after 1 month should be reported as SAEs when the investigator assesses the infant death as related or possibly related to exposure to the study intervention.

An exposure during breastfeeding occurs if:

The investigator must report exposure during breastfeeding to Pfizer Safety within 24 hours of the investigator’s awareness,  irrespective of whether an SAE has occurred. The information must be reported using the Vaccine SAE Report Form. When  exposure during breastfeeding occurs in the setting of environmental exposure, the exposure information does not pertain  to the participant enrolled in the study, so the information is not recorded on a CRF. However, a copy of the completed  Vaccine SAE Report Form is maintained in the investigator site file.

An occupational exposure occurs when a person receives unplanned direct contact with the study intervention, which may  or may not lead to the occurrence of an AE. Such persons may include healthcare providers, family members, and other  roles that are involved in the trial participant’s care.

In spite of these warnings during the trials, the criminal FDA went ahead anyway and gave emergency use authorization to use these experimental shots in pregnant women and nursing mothers.

But the greater concern now is that even those who did their own research and chose not receive the shots, are still being infected somehow.