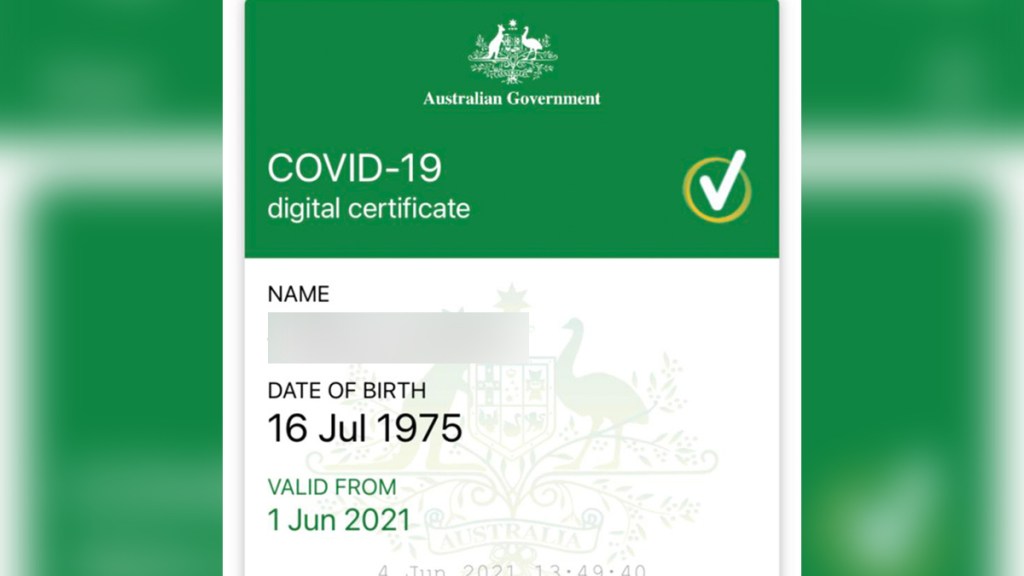 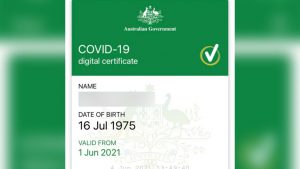 Australians who have received both doses of the COVID-19 vaccine can now prove their inoculation status with a digital passport for the first time, it has been announced.

The official certificate – unveiled by the federal government yesterday – has a coat-of-arms hologram and includes the holder’s name, date of birth and a green validity tick.

TOTT News has been covering the increasingly likely proposition of vaccine passports in Australia since the pandemic began. See here, here, here and here for examples.

In April, it was reported that national cabinet ‘welcomed’ the introduction of a new COVID-19 digital vaccination certificate, which will be made available through the Medicare app or myGov.

This week, the plans are coming a reality.

Government Services Minister Linda Reynolds confirmed yesterday the rollout of vaccine passports in Australia, in which a digital certificate will be administered to prove inoculation status.

This would then allow them to travel or gain entry to certain businesses:

The time has finally arrived, ladies and gentlemen.

Every certificate, it has been announced, will contain a coat-of-arms hologram, including the holder’s name, date of birth and a green validity tick.

Only Australians who have had two doses would be able to access a certificate.

Certificates have been labelled by leaders as the ‘ticket to returning life back to normal’.

Who are the ‘conspiracy theorists’ now?

Australians are already able to see their immunisation history online. The new certificate will be added to Medicare services, showing COVID vaccination status and easily turned into a passport.

From July, all national vaccination program providers will be required to report, where practicable, when a vaccination has been given. It uses an individual’s Medicare number for identification.

The database, the Australian Immunisation Register (AIR), is maintained by Services Australia on behalf of the Department of Health.

Providers can upload vaccination information via an online portal, either directly or through software they use at their practice that is integrated into the AIR.

“We’ve been on a journey, through the year, just doing small releases to bring a digital record into a certificate”.

Skinner noted that while the certificate is currently only just for COVID-19 vaccinations, further jabs may have the capability to be added eventually if required.

The future Epsilon Boosters, that is.

Yes, folks, the Brave New World is transforming from a science fiction blueprint to a present reality:

“There will be, in the next generation or so, a pharmacological method of making people love their servitude, and producing dictatorship without tears, so to speak, producing a kind of painless concentration camp for entire societies, so that people will in fact have their liberties taken away from them, but will rather enjoy it, because they will be distracted from any desire to rebel by propaganda or brainwashing, or brainwashing enhanced by pharmacological methods.

And this seems to be the Final Revolution.”

Many reading this have expected this for a long time now.

Australia is slowly catching up to the rest of the world.

WE will be FINE, and it is always important to remember that.

However, the NPC masses may not be so lucky. They will ultimately fall for this nonsense, charging towards the vaccine.

Countries all over the world have already been hard at work developing digital vaccination passports. Most are being developed for relaxation on restrictions of movement.

The European Union, for example, is set to make available its COVID vaccination passport for all EU citizens and residents by July 1.

The certificate is designed to allow freedom of movement within the EU, by allowing holders to avoid internal travel restrictions, such as entry bans and quarantine obligations.

In addition to travel, other countries have taken a further step and started using vaccination certificates for internal purposes, such as entry into restaurants and events.

Israel is a country that started a ‘green pass’ system earlier this year, which allowed vaccinated people access to theatres, concert halls, indoor restaurants and bars.

People would show the pass on an app to gain entry to places. The app could also display proof someone had ‘recovered’ from COVID-19.

In Australia, we are also discussing whether they can be used to open up interstate movement, which will depend on the agreement of state and territory authorities.

The New South Wales government has also confirmed that venues across the state could require COVID vaccine proof for entry into venues such as bars and clubs.

No doubt the medical apartheid we are witnessing overseas is set to be adopted by authorities here at home, as part of the larger meta-script of the Great Reset.

Australians once protested across all major cities to stop the introduction of a national ID system.

There are now calls for informed citizens to once again defend the hallmarks of liberty and justice.

Freedom is up against the ropes. Sustaining this important principle will require a vocal crowd.

The use of a digital certificate or app (firstly) raises privacy issues. This system will create a significant new store of data of potentially sensitive personal information.

This is of particular concern if it is linked to other information on the myGov plaftorm or contains additional data to that of vaccination status.

Next, there are two main legal concerns with using a COVID certificate to regulate entry into events, restaurants and other businesses.

The first legal point to note is that vaccinations (and certifications of vaccine status) are seen as facilitating the right to health.

Widespread vaccination and the use of vaccination passports are viewed as ‘necessary’ to ‘protect the community’ from COVID. The same ‘logic’ as lockdowns.

Thus, relating to this is the argument will be the notion that vaccination passports will permit greater freedom of movement — which is also recognised human right.

Much like the inverted symbolism that plagues the modern world, authorities invert the meaning of our rights to paint tyranny as a ‘step to freedom’.

This could potentially be argued against in court, given the justifications for lockdowns as proven as falsehoods. However, this would be a very tough task. Remember what happened to Serene.

Secondly, it will be lawful for businesses to refuse entry to persons who do not have a certificate.

Businesses have rights, just as individuals have rights. As long as they abide by anti-discrimination laws.

There will be those who are unable to have the vaccination for medical reasons. A business that excludes such a person could breach these laws.

It would NOT be lawful for businesses selling essential goods (such as Coles and Woolworths) to refuse entry to unvaccinated persons (whether or not they have a valid exemption).

This is due to the fact this would deny persons access to basic food items.

Rights are funny things. Understanding how rights clash with other rights will help in this transition.

We have argued the best way to navigate this upcoming storm is to NOT fight the system from within the system. For the tools are correctly in place to prevent this.

Even the so-called ‘human rights councils’ that should have our back agree with this nonsense, as well as many lawyers.

Communities and networks are a much better method of sustainability. Civil disobedience and street actions.

The modern legal system is nothing but a wing of the illusion now.

Things may have to change, but we will always adapt to whatever comes out way.

Give yourself a reminder that you — yes YOU — are already way ahead of the curb.

Don’t let the manifestation of this agenda extinguish the light inside of you.

For we must all use this light to shine through the darkness.