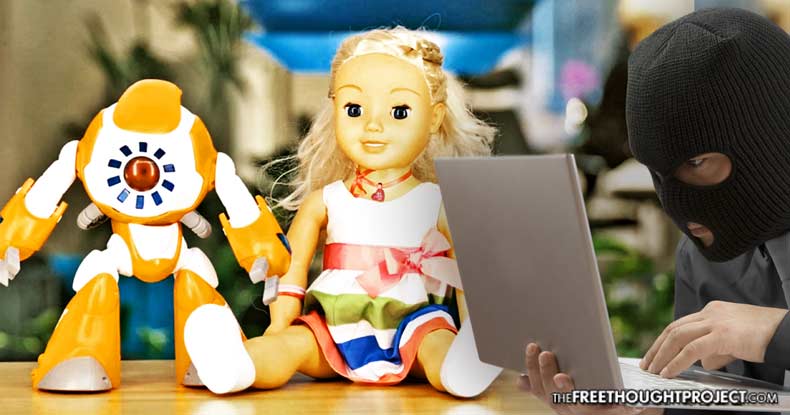 A particularly ominous warning was put out by the FBI’s Internet Crime Complaint Center this week alerting people to the potential dangers Internet-connected toys pose to adults and children alike. Not only do these ‘spy toys’ have the potential to record kids’ conversations, track their movements, reveal their location — they even allow perverts to TALK to children directly.

The alert, titled: CONSUMER NOTICE: INTERNET-CONNECTED TOYS COULD PRESENT PRIVACY AND CONTACT CONCERNS FOR CHILDREN, warns users of the security risks and vulnerabilities posed by this new line of smart toys that connect via WiFi or Bluetooth to your home network.

The toys, according to the warning, typically contain sensors, microphones, cameras, data storage components, and other multimedia capabilities – including speech recognition and GPS options.

According to the FBI, “microphones could record and collect conversations within earshot of the device. Information such as the child’s name, school, likes and dislikes, and activities may be disclosed through normal conversation with the toy or in the surrounding environment. The collection of a child’s personal information combined with a toy’s ability to connect to the Internet or other devices raises concerns for privacy and physical safety.”

Given how easily children give out their information — especially considering they think they are engaging with a harmless toy — the implications for abuse from criminal and government actors are damning.

The deliberate or accidental vulnerabilities inside these toys present a unique opportunity for sickos who want to spy on or otherwise engage in conversation with unsuspecting children.

According to the FBI, these “devices could pose a risk for unauthorized access to the toy and allow communications with a child user.”

In other words, pedophiles could access these toys and talk to children, potentially luring them out of the home and into the arms of their attacker. Given the fact that many of these spy toys use GPS, the predators would easily be able to locate their victim.
However, it’s not just children that are unprotected, these toys are vulnerable to exploits which could allow hackers access to the microphone and cameras — essentially allowing for unauthorized surveillance of their unwitting victims. These exploits would then pave the way for identity theft, bank fraud, or even violent crimes against adults and children alike.

The FBI notes that “Security safeguards for these toys can be overlooked in the rush to market them and to make them easy to use.

“Consumers should perform online research of these products for any known issues that have been identified by security researchers or in consumer reports,” the FBI recommended.

Even if you do all your research and pick out the safest spy toys on the market, however, the data collected and security measures are all out of your hands and in the hands of the manufacturer or server operations.

As the tech site Slash Gear points out, unfortunately, server security is on the manufacturer or their third-party partner responsible for storing the data, and it certainly seems that in a lot of cases, security of these servers is put on the back burner until a breach actually occurs.

As with any Internet-connected devices, allowing children unsupervised access from the start is a terrible idea. And, if you must have them, it is your responsibility to supervise your children, secure your internet access, and make sure that these toys aren’t wholeheartedly spying on you and your kids.

Ironically enough, these toys sound like the FBI’s wet dream.

As TFTP reported last year, a formal complaint filed with the FTC by the Electronic Privacy Information Center (EPIC), the Campaign for a Commercial Free Childhood, the Center for Digital Democracy, and the Consumers Union notes that the “toys subject young children to ongoing surveillance,” in violation of privacy and consumer protection laws — and, worse, the nature of the company Genesis Toys employs for that purpose.

“Nuance Communications,” the aforementioned groups state in a complaint to the FTC, “represents itself as a leader in voice technology, including speech recognition software and voice biometric solutions that allow a search of the company’s 60 million enrolled voiceprints for a voice match from recorded conversations to be performed within minutes. Nuance markets its technology to private and public entities and delivers its voice biometric technology to military, intelligence, and law enforcement agencies.”

“Both Genesis Toys and Nuance Communications unfairly and deceptively collect, use, and disclose audio files of children’s voices without providing adequate notice or obtaining verified parental consent,” the complaint stated.

While the FBI lists a myriad of different ways consumers can limit their risks of exploitation from these toys, conveniently absent from their list is the simple option of not buying them.

Matt Agorist is an honorably discharged veteran of the USMC and former intelligence operator directly tasked by the NSA. This prior experience gives him unique insight into the world of government corruption and the American police state. Agorist has been an independent journalist for over a decade and has been featured on mainstream networks around the world. Agorist is also the Editor at Large at the Free Thought Project. Follow @MattAgorist on Twitter, Steemit, and now on Facebook. This article first appeared at The Free Thought Project.