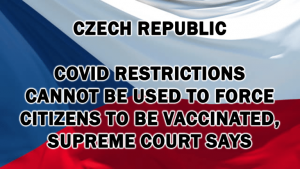 On Wednesday, the Czech Republic’s Supreme Administrative Court ruled that the current measure allowing only people who have been vaccinated or have successfully recovered from Covid-19 into restaurants, clubs and hotels is invalid. The court’s decision will come into force in seven days.

From 22 November 2021, the Czech government banned unvaccinated people from most non-essential indoor places.  The unvaccinated were no longer permitted to show negative Covid tests in order to attend public events, go to bars and restaurants, visit hairdressers, museums and similar facilities or use hotels, ITV reported.  Only people who were vaccinated or recently recovered from Covid remained eligible, with exceptions for teenagers aged 12 to 18 and people whose medical condition didn’t allow vaccination.

“The Ministry has no support for restricting this type of establishment in the so-called pandemic law, unless it is a technical measure, such as the use of disinfection or the location of seats. The ministry could restrict their activities only in accordance with the Public Health Protection Act, however, only to persons suspected of being infected,” Judge Petr Mikeš explained, adding that not everyone can be a suspect of an infection. This would be conceivable only in a situation where the entire Czech Republic would be identified as an outbreak.

The court also pointed out that the aim of the measure in this form could not be to force citizens to be vaccinated, which are voluntary.

On 17 December Petr Fiala was sworn in as prime minister of the Czech Republic.  On 19 January, the new government announced it would invalidate the former government’s directive on mandatory vaccination for healthcare workers and some other professions. The newly elected prime minister argued that his government didn’t want to “divide society even more.”

One thought on “Czech Republic: Covid Restrictions Cannot Be Used to Force Citizens to Be Vaccinated, Supreme Court Says”