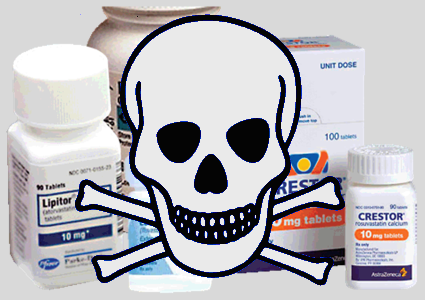 CARDIAC SURGEON/PROFESSOR EMERITUS TELLS THE TRUTH ABOUT THE CHOLESTEROL SCAM AND THE TOXIC EFFECTS OF STATINS.

The following clips are from Dr. Donald H. Miller, Jr’s article published in the Journal of American Physicians and Surgeons, summer 2015 edition, which can be read in full here. Fallacies in Modern Medicine: Statins and the Cholesterol-Heart Hypothesis

Modern medicine has developed striking ways to treat coronary heart disease, which feature coronary stents implanted percutaneously and coronary artery bypass grafts performed surgically with the aid of a heart-lung machine. And then there are statins to lower cholesterol.

It is a multibillion-dollar business. Pfizer’s Lipitor went on sale in 1997 and became the best-selling drug in the history of prescription pharmaceuticals before its patent expired in 2011. Sales surpassed $125 billion. AstraZeneca’s Crestor was the top-selling statin in 2013, generating $5.2 billion in revenue that year.

Government and the pharmaceutical industry fund these multimillion-dollar studies expecting correct results, so statin trial researchers employ this particular kind of statistical deception to create the appearance that statins are effective and safe. As one medical school professor puts it, “Anyone who questions cholesterol usually finds his funding cut off.”

Statins do more harm than good.

Fungi make statins, as a “secondary metabolite,” to kill predatory microbes. They also kill human cells. In a review of How Statin Drugs Really Lower Cholesterol and Kill You One Cell at a Time by James and Hannah Yoseph, Peter Langsjoen writes:

Many practicing physicians have a healthy understanding of the current level of corruption and collusion among big pharmaceutical companies, governmental agencies such as the NIH and FDA, and major medical associations [and non-profits] such as the American Heart Association, but the reader of this book will come away with the disturbing conclusion that it is even worse than imagined. Statins may be the perfect and most insidious human toxin in that adverse effects are often delayed by years and come about gradually. Further, statins frequently impair mental function to such a degree that by the time patients are in real trouble, they may lack the mental facilities to recognize the cause.

Myopathy is the most common adverse effect of statin treatment, manifested by muscle aches and pains, weakness, instability, and easy fatigue. The most severe manifestation of statin-induced muscle damage is rhabdomyolysis, which carries a 10 percent mortality rate. Fragments of ruptured muscle block renal tubules and cause kidney failure. In one randomized trial of 1,016 healthy men and women given statins or a placebo, 40 percent of the women taking statins suffered exertional fatigue or decreased energy.

Several randomized controlled trials have reported a statistically significant increase in cancer associated with taking statins. In most of these trials, a small reduction in cardiovascular deaths in the statin group is counterbalanced by an increase in deaths from other causes, notably cancer, with the result that there is in no significant difference in all-cause mortality between people taking a placebo and those prescribed statins.

Statin trials typically run for only 2 to 5 years. Investigators terminated the influential JUPITER trial endorsing statins for primary prevention of ASCVD after (a median) 1.9 years, far too short a time to reveal one of the worst “side effects” of long-term statin treatment: accelerated senescence. Statins speed up the transition from midlife vigor to debilitated old age.

Heart surgeon Michael DeBakey and his team, 52 years ago, found no correlation between blood cholesterol levels and severity of atherosclerosis in 1,700 patients undergoing surgical treatment of ASCVD. I have observed the same thing with my heart surgery patients (unpublished observation). Evidence for the cholesterol-heart hypothesis, i.e., the lipid hypothesis, wilts upon close scrutiny, as is also the case with the diet-heart hypothesis, which indicts saturated fat along with cholesterol for causing atherosclerosis. Approached with an open mind and without confirmatory bias (ignoring evidence that disagrees with one’s beliefs), substantial evidence now proves beyond a reasonable doubt that these hypotheses are wrong.

Cholesterol acts as the body’s fire brigade, putting out inflammatory fires and helping repair damage. Blaming cholesterol for atherosclerosis is like blaming firemen for the fire they have come to put out.

Cementing this molecule’s physiologic importance, there are now more than 100 peer-reviewed studies showing that low cholesterol levels are associated with earlier death.

It is becoming increasingly clear that the cholesterol-heart hypothesis is a fallacy of modern medicine. In the future, medical historians may liken the prescribing of statins to lower blood cholesterol with the old medical practice of bloodletting.

Doctor Miller’s presentation on saturated fats and heart disease is a must see:

One thought on “Demonizing cholesterol is essential for the sale of dangerous statins!”