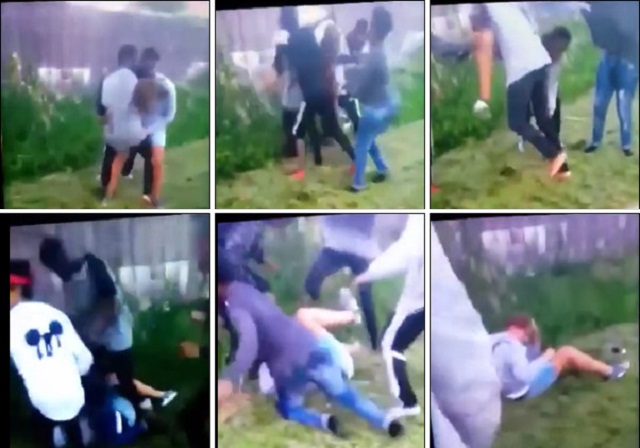 A father outraged after his son was beaten by “6-8 Somali youth” shared video the incident on his Facebook page where it quickly amassed over 1.6 million views.

From Fria Tider (via The Gateway Pundit) [Translated by Google]:

Brian Anker in Fredericia in Denmark have had enough then a film spread in social media where his own son were assaulted and beaten by several Somalis.

It is one of Denmark’s currently most viral news – the film that shows how the five Somalis unprovoked jump on and beat up 13-year-old Noah at a railway station in Fredericia in Jutland, Denmark. All Somalis while others scoff and filming the beating with their mobile cameras.

[…]The assault occurred at midday on Friday, July 28 in the vicinity of the railway station in Fredericia. Noah had an appointment with some Somalis, who is a year older than him, to do something together. But when he got there the atmosphere was strange, the Somalis did not speak Danish, but instead tried to talk with the Somali him.

When Noah did not understand what they said, and the situation was unpleasant, he wanted to go home. Then the Somalis to attack and struck him while they filmed the beating.

“Brian Anker has had enough now,” writes Noah’s father Brian on Facebook. “But fucking … Enough is enough … I share this for my patience is over … Now we’re fucking stand together and fight what is happening around us,” he continues.

Brian went to the local mosque and according to BT also a Somali cultural association and will then have received an apology. But the town spreading rumors that the Somalis should embark on Noah’s buddies as soon as school starts after the summer holidays.

The outraged father also contacted the police, but because the Somali attackers are under 15 years the case has already been closed.

The boy went to play with them. He didn’t speak Somali, so they tackled him, kicked him repeatedly on the ground, filmed the assault with camera-phones no doubt paid for by Danish taxpayers, and had a good laugh at his expense.

Seeing as how this is normal behavior in war-torn Somalia, I’d say this is truly “cultural enrichment” at its finest.