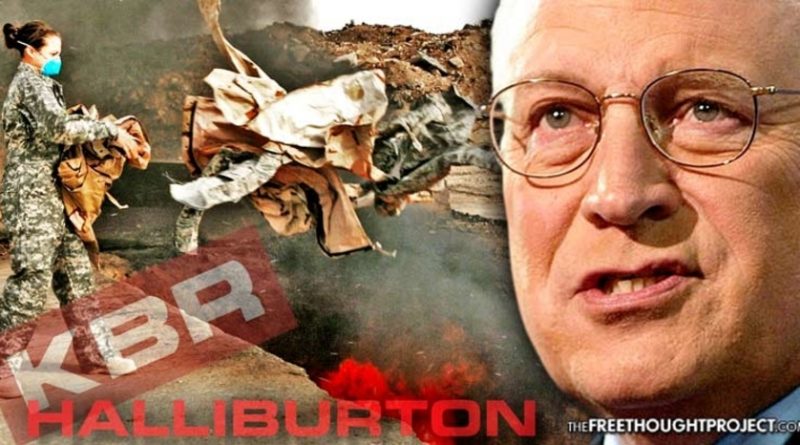 By Matt Agorist of The Free Thought Project

The families of suffering and dying Iraqi veterans, who breathed in toxic fumes because of the negligence of military contractors, received some horrible news this week. A federal judge in Maryland just dismissed a massive collection of cases brought against the contractor who claimed that the open burn pits in Iraq left them sick and dying from serious illnesses.

The legacy of death and misery from the invasions of Iraq and Afghanistan continues today, and, once again, Dick Cheney plays a central role. The company at the center of the myriad of lawsuits is the infamous government contractor, Kellog, Brown, and Root (KBR).

KBR, which was a part of Dick Cheney’s corporate empire under Halliburton at the time, operated about 250 burn pits which contributed to the $40 billion that Halliburton made during the Iraq occupation. “Every type of waste imaginable” was burned, including “tires, lithium batteries, asbestos insulation, pesticide containers, Styrofoam, metals, paints, plastic, medical waste and even human corpses.”

The families have been seeking compensation for the deaths and suffering of their loved ones since 2009 and this week a federal judge crushed their hopes.

The complaints all made the same basic claims – that KBR ran massive burn pits at operating bases in Afghanistan and Iraq into which its employees dumped tires, trucks and even medical waste.

The resulting towers of smoke left the soldiers on the bases with chronic respiratory and gastrointestinal illnesses, as did the contractor’s alleged failure to provide clean water to troops on the ground, according to a class-action complaint filed in the Circuit Court for Montgomery County, Maryland by Alan Metzgar and Paul Parker in 2009.

The massive litigation survived KBR’s initial motion to dismiss and U.S. District Judge Roger Titus even granted limited discovery in the case in 2010 before he eventually granted another one of KBR’s motions to dismiss the case in 2013.

Last Friday, KBR asked the federal court to toss out the multidistrict litigations, noting that the court does not have jurisdiction over military battlefield decisions. And, this week, the company finally got what they wanted as the judge listened to them and tossed it out.

KBR’s defense consists of passing the buck by saying it only operated those burn pits to dispose of trash under the direct control of the U.S. military, which it argues made a battlefield decision to order the use of the pits.

However, the plaintiffs in the case argued that KBR’s agreements with the government gave it the freedom to consider how to carry out their required tasks. But, sadly, the judge wanted nothing of it, in spite of acknowledging there is “some evidence” that KBR had a certain amount of control over the burn pits.

To be clear here, the burn pits are both the fault of KBR and the US government and both should be held liable for the damage they caused. However, it appears, that this will not happen.

Also, it is important to note that because he held the position as the Vice President of the United States as well as his ownership in KBR’s parent company Halliburton, Dick Cheney was representing both the US government and the private company.

According to CNS, Baltimore attorney Susan Burke, who represents the plaintiffs in the case, said in an email to Courthouse News that her clients will be appealing the decision.

As Justin Gardner wrote last year for TFTP, just as the U.S. laid waste to Vietnam’s human health and jungle environment with Agent Orange, it wrecked human health and environmental quality in Iraq. That country will suffer from this toxicity for decades, as evidenced by sharp increases in birth defects and cancer and leukemia rates.

Likewise, U.S. veterans and their families are bearing the brunt of this travesty.

A book by Joseph Hickman, a former U.S. Marine and Army sergeant, titled “The Burn Pits: The Poisoning of America’s Soldiers” details the story of a healthy young soldier sent to Iraq who was constantly exposed to smoke from burn pits. When he returned home with respiratory problems, the Veterans Administration (VA) denied him care, and he later developed brain cancer and died.

Those who do survive are having children with birth defects at a rate three times higher than normal, according to the book. The denial of medical coverage by the VA for burn pit-related illnesses is a central strategy in denying that burn pits even posed a health hazard.

Beau Biden, the son of vice president Joe Biden, died of brain cancer after serving in Iraq in the vicinity of burn pits. Even this tragedy, which is similar to many stories of exposure and death, never brought attention to the issue of burn pits.

Salon interviewed author Joseph Hickman at the time, who provided even more shocking details, and how the Department of Defense (DoD) does all it can to keep this knowledge from the public.

I think the Department of Defense does its best to squash this story and so does Veterans Affairs. They really don’t want this out at all.”

Hickman interviewed one former KBR employee who was very reluctant to even talk about burn pits for fear of repercussions, as he was harassed by KBR when he previously came forward about the issue. By using private contractors for such operations, the DoD facilitates these egregious assaults on human and environmental health because contractors are not held to the standards of the military.

This dependency on contractors feeds their tendency for carelessness. According to Hickman, the upper management of KBR said at one point, “If they’re going to investigate us over these burn pits, don’t worry about it. If we pull out, they can’t run this base.”

That was then, this is now and apparently, the same rules still apply.