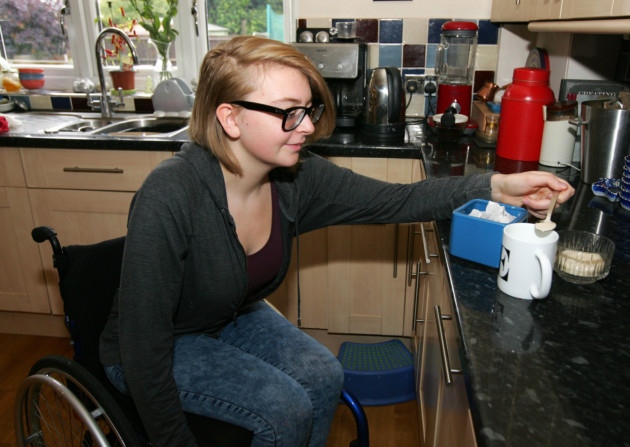 This month thousands of young teenage girls in Kent will have the HPV vaccine at school as the latest round of the programme is rolled out.

The jab has been described as “probably the most important thing ever done” to protect women’s health and is predicated to prevent up to 400 deaths a year from cervical cancer.

Yet some parents are questioning the vaccine’s safety as their daughters have suffered disabling and life changing illnesses following vaccination.

One of those is Christina Berry-McIntosh, from Birchington, whose daughter Ellen was a happy and healthy 12-year-old girl who loved to swim competitively and take part in charity races before suffering such debilitating ill health she has been left in a wheelchair.

“Every day I regret ever having allowed her to have the HPV vaccine and can’t help but wonder how different our lives could have been,” said her mother.

The vaccine is given as two, and previously three, separate injections to girls aged 12 or 13 at school.

Ellen had the first and second jabs at Charles Dickens School in Broadstairs in 2010 and fell ill immediately after.

“From that day she suffered virus after virus,” said her mother. “We went to several doctors who really were not taking this seriously. Not only did they treat Ellen with a total lack of respect they treated myself and my husband like criminals. We were made to feel that this was all our fault.”

By the time Ellen took her GCSEs she was using a cane and she is now unable to walk unaided and has to use a wheelchair.

She vomits almost every day, has great instability in her legs and feet, has muscle spasms, brain fog, urinary urgency, clicky joints and chronic pain in her ribs and joints.

Now aged 18, Ellen has being diagnosed with PoTS syndrome, a condition that causes abnormal increases in heart rate, as well as hyperventilation syndrome and Raynaud’s syndrome.

She has been forced to defer her place at university to study fine arts due to her health.

“I cannot put into words how hard the last five years have been for us as a family,” said Mrs Berry-McIntosh, 47, an admin manager. “To have to watch our daughter suffer with little or no help from the medical profession.”

Other teenagers have similar stories to tell and the European Medicines Agency (EMA) is currently carrying out a review investigating “rare reports” of PoTS and another condition called complex regional pain syndrome following the HPV vaccine after Denmark flagged up safety concerns.

Wedding and party decoration business owner Lisa Stanley is another mother who believes her daughter’s health has been affected by the vaccine.

Within hours of having the second HPV jab in January 2013, her daughter Deanna’s arms turned purple and she started vomiting.

Just 24 hours later she was in intensive care and Deanna, 16, has had pneumonia twice since, suffers from extreme tiredness and crippling pain in her ribs.

“Two or three months before the vaccine she swam a mile,” said Mrs Stanley, 42, in Margate.

“Now she’s got chronic fatigue, chronic pain, if she can stand up for the morning she’s lucky.

“It’s been absolutely horrific and I feel like it’s my fault because I signed the consent form.”

Government health agencies Public Health England and the Medicines and Healthcare Products Regulatory Agency (MHRA) say PoTS and chronic fatigue occur most commonly in girls around this age whether they are vaccinated or not.

A spokesman for the MHRA said: “The HPV vaccine has a very good safety record, and surveillance shows it has contributed to a significant decrease in rates of infection with the two main cancer-causing human papillomaviruses (HPV).”

Both agencies point to concerns that the vaccine’s high uptake rate of 90 per cent will be affected and needlessly place the future health of young women at risk.

Professor Andrew Pollard, chair of the government’s Joint Committee on Vaccination and Immunisation (JCVI), which monitors and advises on vaccine safety, said: “We have very clear evidence that this year 900 women, who have not received the vaccine, will die of cervical cancer and the vaccine has the potential to prevent such deaths in future generations.

“My biggest concern, given that we’re not concerned about safety, is that there is a story here which could deny girls the vaccine and could result in people dying as a result of this.”

One of the reasons Ellen’s mother was so quick to sign consent forms was that she suffered from cervical cancer when she was younger.

“For me it was a no brainer,” said Mrs Berry-McIntosh. “But I hadn’t realised the vaccine doesn’t actually cover the strain of cancer I had. So now my daughter has had an adverse reaction plus she could still get cervical cancer.”

The Association for HPV Vaccine Injured Daughters (AHVID), set up in January this year to raise awareness about concerns over the jab’s safety, are gathering data and case studies to submit to the European Medicine Agency’s review by mid October.

The group has called for parents to be made aware of the review and for more research to be carried out tracking “symptom clusters” following the HPV vaccine to recognise the many girls with similar health problems.

Founder member Caron Ryalls, 50, said: “The MHRA obviously maintains the benefits of the vaccine far exceed the risks. We think the benefits are over-stated and the risks under-estimated.”

If you need support, or would like information about your case sent to the EMA, contact AHVID chair Freda Birrell on jeanfreda8@btinternet.com or 07752 945 545. For more information on the HPV vaccine visit the NHS Choices website.