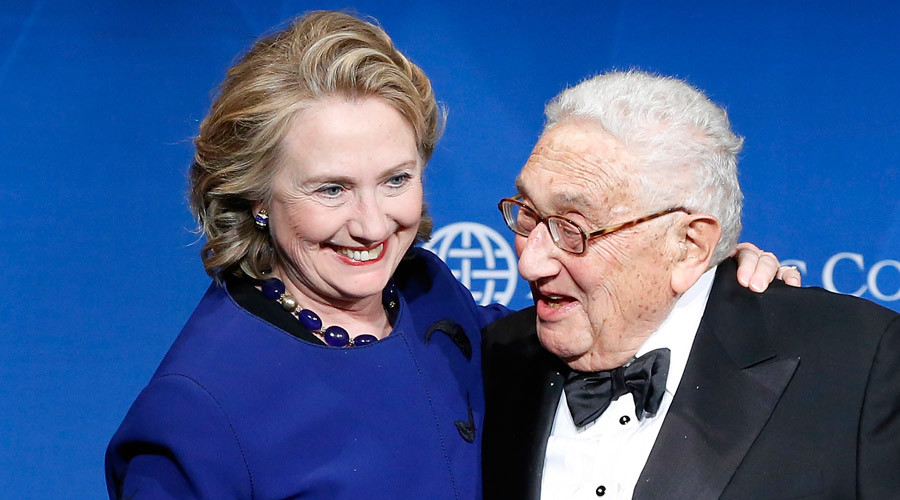 Democratic presidential nominee Hillary Clinton has been seeking the endorsement of her long-time idol – and brutal war criminal – Henry Kissinger.

While the approval of such a man may seem at odds with an ideal endorsement, Clinton has long admired the work of the former secretary of state, and even sought his advice during her time in the same position.

Kissinger was national security advisor to Richard Nixon and Gerald Ford between 1969-73.

From 1973-77 he was secretary of state under both Nixon and Ford.

While Clinton retains the ultimate warmongering seal, RT examines some of Kissinger’s most memorable acts, with fingers crossed that Clinton doesn’t follow too closely in his footsteps.

On 9/11 in 1973 the US-backed Chilean military carried out a coup which overthrew the democratically elected government of Salvador Allende.

Documents from the National Security Archive reveal Kissinger, then national security advisor, pushed Nixon to get rid of Allende, as his “‘model’ effect can be insidious”.

With help from the CIA, the coup was the start of more than a decade of horror and repressions under dictator Augusto Pinochet. Kissinger knowingly ignored reports of Pinochet’s repressions, choosing to send his “strongest desires to cooperate closely and establish firm basis for [a] cordial and most constructive relationship.”

The US meanwhile, enjoyed the spoils of a subservient government which allowed its corporations to plunder the country’s resources without interference.

While the US’s war in Vietnam was well publicized, even as it became clear it had been a failure, the US’s illegal carpet bombing of neighbouring Cambodia and Laos was lesser known.

During this time, the US dropped half a million tonnes of bombs in Cambodia alone, along with more in Laos and Vietnam, as well as devastating chemical weapons including agent orange and napalm, the effects of which are still being felt by Southeast Asians today. Then there are the unexploded bombs which continue to take the lives of innocent people. Studies estimate as many as 25,000 have died at the hands of the US’s unexploded bombs since the attacks ended.

Kissinger’s hand in the Indochina war extended the Vietnam war and set the stage for the Khmer Rouge reign in Cambodia.

Kissinger approved the invasion of East Timor by Indonesian dictator Suharto in 1975, supplying Indonesia with arms in spite of an embargo. Suharto, who came to power as a result of a coup and arms support from the US which saw more than 1 million killed, proceeded to slaughter a quarter of a million people in East Timor.

Kissinger and Ford then made efforts to prevent the rest of the world from stopping the violence.

In 1999 when the small island voted for independence, president Bill Clinton chose to ignore the actions carried out by Indonesia which had been avoidable. Military aid given to Indonesia during Clinton’s presidency stood at about $150million.

Kissinger played a part in Pakistan’s invasion of Bangladesh, which saw as many as three million killed.

In 1971, Bangladesh, which was then East Pakistan, declared its independence following the victory of Bengali nationalists in the elections. The Pakistani army attempted to silence the population by raping women and killing civilians with US weapons, particularly the Hindu minority. Victims included children.

Kissinger and Nixon supported the Pakistani regime, with Kissinger congratulating Pakistani dictator Yahya Khan forhis“delicacy and tact,” and mocked those who fought for “the dying Bengalis.”

Kissinger’s influence has shaped many other geopolitical disasters, including introducing the US-Saudi Arabia arms for oil relationship, encouraging the use of political Islam to destabilize Afghanistan, and the wiretapping of staffers and journalists in the US.

5 thoughts on “Disgusting: As Hillary Clinton kisses up to Henry Kissinger, RT looks at 4 of his most heinous acts”