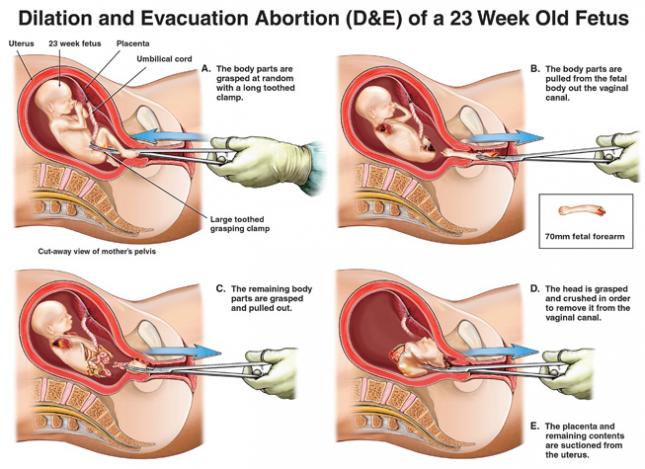 September 11, 2015 (LiveActionNews) — This week, the Congressional Judiciary Committee conducted its first hearing on the investigation of Planned Parenthood.

Titled “Planned Parenthood Exposed: Examining the Horrific Abortion Practices at the Nation’s Largest Abortion Provider,” this first hearing included four witnesses, one of which was Ms. Priscilla Smith, a Director and Senior Fellow at the Program for the Study of Reproductive Justice at Yale Law School. Her comments before the committee were truly horrifying.

Carhart testified that he had personally “observed fetal heartbeat” on an ultrasound screen, even after substantial portions of the baby had been dismembered and pulled apart. This type of abortion is known as a D&E abortion, or a “dismemberment abortion,” as the baby is literally torn and ripped apart, limb from torso.

D&E abortions are the most popular second-trimester abortion procedures in the nation.

The fetus in many cases dies, just as a human adult or child would – it bleeds to death.

Do you believe this is a humane way to die?

At first, Smith attempted to distinguish between abortions on viable and non-viable babies, but Goodlatte reminded her that Justice Kennedy had written of a baby whose arm was pulled off in an attempted D&E abortion, but was later born alive and lived.

Smith still reverted back to discussing only “pre-viable” babies. [Incidentally, the majority of D&E abortions are indeed performed on pre-viable babies, as they are performed all throughout the second trimester, yet viability does not change the horror of ripping apart a living human baby.]

Yes, a D&E procedure is a very humane procedure…

As an abortion activist with decades of experience, Smith is fully aware of exactly what happens during a D&E abortion. And yet she easily declares that it is “humane.”

A second-trimester D&E abortion is a blind procedure. The baby can be in any orientation or position inside the uterus. Picture yourself reaching in with the Sopher clamp and grasping anything you can. At twenty weeks’ gestation, the uterus is thin and soft, so be careful not to perforate or puncture the walls. Once you have grasped something inside, squeeze on the clamp to set the jaws and pull hard – really hard. You feel something let go, and out pops a fully formed leg, about 4 to 5 inches long. Reach in again and grasp whatever you can. Set the jaw and pull really hard once again, and out pops an arm about the same length. Reach in again and again with that clamp, and tear out the spine, intestines, heart, and lungs.

The toughest part of a D&E abortion is extracting the baby’s head. The head of a baby that age is about the size of a plum and is now free-floating inside the uterine cavity. You can be pretty sure you have hold of it if the Sopher clamp is spread about as far as your fingers will allow. You will know you have it right when you crush down on the clamp and see a pure white gelatinous material issue from the cervix. That was the baby’s brains. You can then extract the skull pieces. If you have a really bad day like I often did, a little face may come out and stare back at you.

Congratulations! You have just successfully performed a Suction D&E abortion.

As Rep. Forbes pointed out later in the hearing: