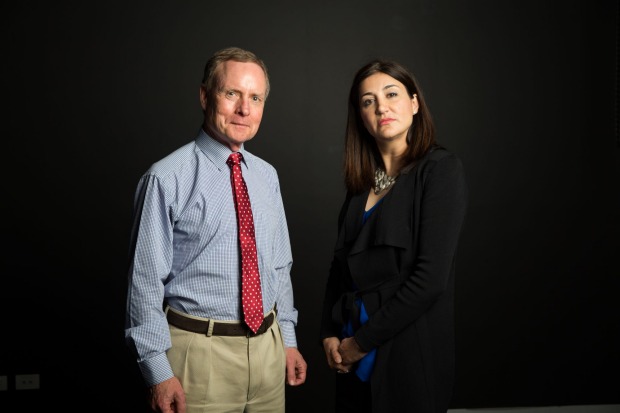 The faces behind the DCA’s new campaign. Photo: AFR.

Workplace ‘diversity consultants’ are charging Australian companies up to $1800 an hour to warn employees about the dangers of using “non-inclusive” language such as “mum” and “guys”.

It has been revealed the Diversity Council of Australia (DCA) has been charging companies $3600 for a two-hour program delivered by “experienced DCA staff and consultants” to educate companies about “the power of words” at work.

The move is all part of the new #WordsAtWork campaign launched by the DCA, which aims to “spark a conversation about how even seemingly innocuous language can exclude minority groups”.

The DCA is headed by former Australian of the Year and retired Lieutenant General, David Morrison, who launched the campaign that is calling on people to think about the impact of their language, particularly ‘throwaway’ or ‘subtle lines’.

Morrison, who has been championing the message to media outlets across the country, rose to national attention after a video was released in which he attacked members of the military who couldn’t accept women were their equals.

The move is the latest in a shift of PC momentum in Australia, which has seen the ABC publish pieces on the destruction of ‘gendered language’, Commonwealth Games volunteers addressed about ‘tolerance’ and Qantas directing staff on “appropriate language” to use in the workplace.

In the video, Morrison and a female office worker inspect a sign left above a kitchen full of dirty dishes reading, “Clean up after yourself – your Mum does not work here!”.

Mr. Morrison takes a pen to the sign so it reads “your Mum/Dad”.

Last year, the DCA revealed it had been forced to turn off comments and ratings on the video, which also urged against the use of the word “guys”, due to “highly offensive abuse”.

According to news.com.au, the DCA is charging $2500 for members or $3600 for non-members for a two-hour program to be delivered to workplaces.

The DCA points to a number of studies indicating women experience very high levels of sexual discrimination in the workplace, and warn that sexist comments “negatively affect academic performance”, and that sexist jokes can lead to “toleration of hostile and sexist attitudes”.

The DCA also says “guys” is gendered words that can make women feel left out.

In a statement, DCA chief executive Lisa Annese said the program was developed in 2016 because “businesses told us that they were struggling to include all members of their increasingly diverse workplaces”.

“In response, we developed the campaign video, series of guides and education program to show how inclusive language can improve workplace culture and drive productivity.

We want to get people thinking about the language they use in the workplace and whether it’s inclusive or excludes people.

We’re not telling people what to say, we’re encouraging people to think about the words they use at work so everyone feels respected, valued and included. We know from research that when more inclusive language is used at work, people are greater engaged and more proactive.”

Diane Smith-Gander, president of women’s advocacy group Chief Executive Women, told Fairfax Media she used the word ‘ guys’ often at work, and “it is going to be a real problem for me… it’s a word I use all the time“.

For more information on why this is significant, watch the video ‘What Is Cultural Marxism?’.

Related: The need for traditional nationalism against cultural marxism in Australia