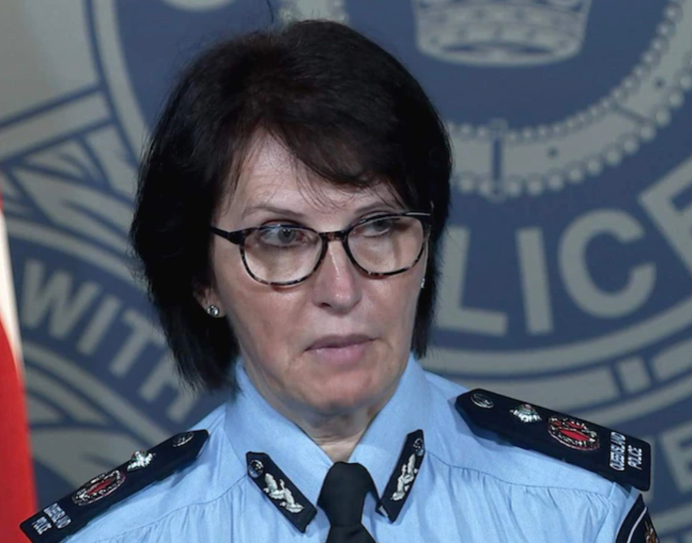 DOB IN AN ANTI-VAXXER to police!!!

Queensland Police are now actively targeting thought criminals, with the Deputy Commissioner openly calling for people to dob in anybody they notice contradicting The Narrative.

From the Daily Mail:

Deputy Commissioner Linford urged the public to dob in to police anyone who displayed anti-government, anti-police, or Covid conspiracy theory rhetoric.

She said it was a very complex investigation and she wanted ‘to manage expectations about getting that why and that how’.

Ethical standards command was leading the investigation, assisted by homicide, intelligence, covert online, and counter-terrorism, along with local cops.

Investigators were trying to create a timeline of their activities in the weeks and months leading up to the shooting.

This involved taking statements from dozens of people including friends, associates, neighbours, past employers, and locals, as well as combing through their bank accounts and phone records for clues.

Specialist officers were also trawling social media trying to understand the Trains and find anything about them.

Deputy Commissioner Linford said there were ‘names other than the Train family names’ that were of interest.

Bizarrely, Queensland Police are now stating the Trains had no links to organised groups deapite the Lying Press having spent a week attempting to link the trio to some kind of dark conspiracy of online activists.

Deputy Commissioner Linford said the shooting was not being classes as domestic terrorism, and the family had no links to any organised groups or any indication they were ‘planning something bigger’.

‘There is nothing to indicate there was any other person involved… there were postings to social media sites but we haven’t found any connection to any particular issue-motivated group,’ she said.

She said police saw displays of anti-government, anti-police, and conspiracy theorist sentiment, but nothing to indicate they were ‘inspired’ by anyone to kill police.

However, social media videos and posts by the trio showed they had contact with fellow conspiracy nuts in the US and elsewhere, which police are investigating with the help of American law enforcement…

Police were also identifying other people posting on the same sites, and those running, and planned to speak with them as part of the investigation.

Note the use of emotive language – “conspiracy nuts”. This may be the admittedly sensationalist Daily Mail, but this is editorialising, not reporting.

The official story regarding the purpose of the police visit to the Wieambilla property has now changed, possibly due to queries as to why four police officers were sent to investigate a routine missing persons report. The official line is now that they were following up a warrant:

Before they left, the officers checked all three Trains in the police database and found very limited criminal history or concerning behaviour.

Nathaniel had only a 2014 driving offence and an incident on December 17, 2021, where he abandoned two guns at the NSW-Queensland border after crashing his car into a barrier at a Covid checkpoint.

They discovered he had an outstanding warrant from this incident that police tried to speak to him about in August but couldn’t find him, so they took the opportunity to follow that up at the same time.

His firearms licence was also suspended as a result of him abandoning two unsecured guns behind after the border-running incident.

Gareth had only a 1998 offence for possessing a firearm with an expired licence, and Stacey no police history at all.

Deputy Commissioner Linford said four officers went to the property, rather than the usual two, because it was standard procedure when serving a warrant.

It is worth noting that the warrant on Nathaniel Train only existed in the first place as a result of the illegal Queensland-NSW border restrictions established during the Covid lockdowns.

So they lied. It wasn’t a welfare check.

About 6 hours ago, Queensland police admitted they’d visited the Train property multiple times (its not clear how many times exactly) throughout the year, looking for former school teacher Nathaniel Train. He was being investigated for “crossing a state border illegally” (during covid lockdowns) carrying firearms registered to him.

It’s becoming clear the Train family felt harassed, had (likely) travelled to attend protests against the lockdowns, were trying to evade arrest and had grown paranoid.

Why did the police lie to the press and the pubic for two weeks, fail to mention the warrant for Nathaniel’s arrest and pretend their last visit was “just a welfare check?” Following up a warrant and jumping a locked gate intending to find and arrest somebody isn’t a welfare check.

What else are they hiding?

Further adding to the suspicious nature of the event, after the Queensland Police Union declared on Tuesday that it intended to purchase the property on which the shooting occurred, last night a suspicious bushfire nearly destroyed the home of the neighbour who was shot during the gun battle. Both incidences will only serve to fuel suspicions of a cover up.

The events of the past week fit a pattern whereby political dissidents are being railroaded by authorities. On Tuesday, EAM leader Thomas Sewell was found guilty of charges related to an incident with a security guard outside the Channel 9 office in Melbourne in March 2021.

CCTV footage of the incident had been withheld for nearly two years, during which time the Lying Press claimed Sewell’s defence of his cameraman was actually an unprovoked attack. Then during the trial, the prosecution argued and the magistrate agreed that the footage showed the guard pushed Jacob Hersant’s shoulder, despite still shots clearly indicating a throat punch occurred.

This begs the question, if the CCTV footage showed a shoulder punch, why withhold it? Surely publicising it would have boosted The Narrative.

In May last year, Sewell was denied bail explicitly on the grounds of his political beliefs and spent seven months in prison.

It is evident that opposition to mass immigration and Covid Tyranny both directly threaten the Regime’s agenda, and outspoken individuals and organisations in both camps are being targeted as a result.

Furthermore, any people who just want to be left alone off grid are being framed as terrorists. This raises the question as to why the Australian Regime is so fixated on preventing people from existing outside the system.

Dob In A Thought Criminal Is Also Trending In NZ