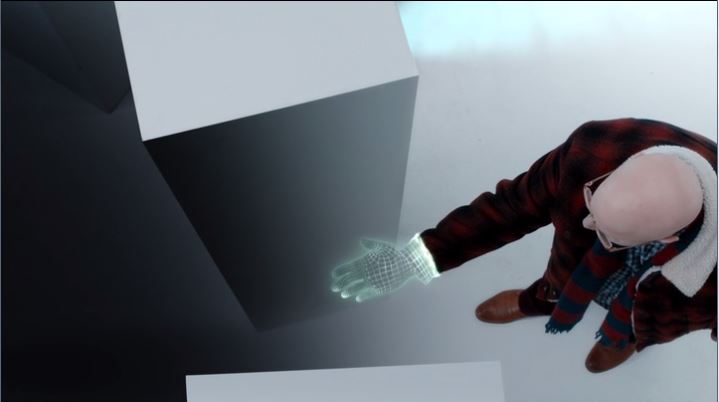 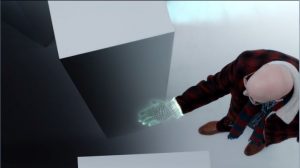 Excerpts from the transcript:(And into a very bright white room. Eleven columns arranged in an almost-circle in the middle are projecting ovals of light. Bill and Nardole come back in through one.)

MONK: This is a game.
NARDOLE: Those things, what do they look like?
BILL: Projectors.
NARDOLE: Exactly.
BILL: Yeah, they’re projecting the portals.
NARDOLE: No, they’re not. They’re projecting everything. Those worlds, they’re all projected. The Pentagon, the Vatican, CERN.
BILL: They’re not real?
NARDOLE: No, no, they’re holograms. They’re holographic simulations. And the people in them, too.
BILL: Sorry, what?
NARDOLE: You know, like the holodeck on Star Trek, or a really posh VR without a headset. Through there, those places, that’s basically Grand Theft Auto.
BILL: But it can’t be.
NARDOLE: It is! Look at the tech. It definitely is.
BILL: What? Sorry, you’re not making any sense. When did we end up in a computer game? When did that start?
NARDOLE: I don’t know. Maybe when we arrived at the Vatican? But I programmed the Tardis myself. We were on target. We went to the Vatican, the real one, I’m sure of it. Oh.
BILL: Oh?
NARDOLE: Those machines, they project the simulations.
BILL: Yeah?
NARDOLE: And I’m just wondering what happens if we move outside the light of the projector? Don’t let me be right. Please, don’t let me be right.
(He reaches into a space between two projectors, and his hand begins to decompile into a grid outline.) NARDOLE: I’m part of it! I’m part of the simulation! Bill, I’m not real!
(The rest of him dissolves into pixels, and he disappears.)

DOCTOR: The Veritas tells of an evil demon who wants to conquer the world. But to do it, he needs to learn about it first. So he creates a shadow world, a world for him to practise conquering, full of shadow people who think they’re real.
BILL: There was a thing. The shadow test?

DOCTOR: Imagine an alien life form of immense power and sophistication, and it wants to conquer the Earth. So it runs a simulation. A holographic simulation of all of Earth’s history and every person alive on the surface. A practice Earth, to assess the abilities of the resident population. Especially the ones smart enough to realise that they are just simulants inside a great big computer game.

MONK: She was not real. You are not real.
DOCTOR: No, I’m not. I’m a shadow. A puppet Doctor for you to practise killing.
MONK: We have killed you many times.
DOCTOR: Then what are you waiting for? Why don’t you kill me now?
MONK: You suffer. Pain is information. Information will be gathered.

MONK: You are not real. There is nothing you can do.
DOCTOR: There’s always one thing you can do from inside a computer. Even if you’re a jumped-up little subroutine, you can do it. You can always (puts on the shades) e-mail!
(Memory file uploading.)
MONK: What are you doing?
DOCTOR: I’m doing what everybody does when the world is in danger. I’m calling the Doctor. Pressing send.
(He grins, and the whole image flickers, pixilates and is replaced by – Recording ends.)

(The Doctor sitting outside the Vault removes his shades, then replaces them when he gets another message alert. Additional message P.S. Dear Doctor, Save Them The Doctor X. He stands and uses his mobile phone.)

Donna and Hieu plug back in with me tonight to chat about  the live life claim and the incredible matrix like system that totally saturates every corner of our lives. You can find Hieu’s website here and can also contact him through the website if needed.  YouTube channel can be found here Related Posts:“LYING TRAITOR”[…]