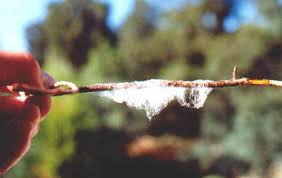 VAN WERT, Ohio (INTELLIHUB) — A strange fibrous material was once again spotted falling from the sky.

This marks the third documented incident in the past 12 months involving a fibrous material of an unknown origin to have been dropped from the sky inside the Continental United States. But what makes government’s latest drop-spot for these ominous fibers particularly interesting, and even more concerning, is that for the first time it’s now happening outside of Arizona.

[…] the type fibers you mentioned in your Dec. 5 2014 Intellihubarticle have been falling from sky for 2 days now [Nov. 2 and Nov. 3] in our area. I have a sample in my possession. They seem to stick together at times in a clump and fall. If you block out the sun with your hand you can see them floating in the air easily. I don’t think they are spider webs as reported by some media.

The source also mentioned how the fibers were “less clumped” on Nov. 3, than on the first and second.

I am a 58-year-old technical process operator and was visiting a downtown Van Wert business [on Nov. 2, when] I left the business and noticed clumps of white web like material floating down from the sky. I went back inside the business to tell the owner and another customer to come outside and take a look.

All three of us looked up and saw that the sky was full of these floating webs in single strands as well as clumps , some hitting the ground. They were hard to see up high without the light being just right. On the way home, a few miles away, I was able to see more of them. They were caught on almost every car radio antenna. They really showed up well on cars [that were] painted black.

[Eventually] I stopped at another store and ran into a friend and I pointed the webs out to him. He had already noticed them because he said he felt like he was walking into spider webs as he crossed the wide open parking lot. We both watched them for a few minuets discussing what they might be. We found if you blocked the sun just right one could see a steady stream of them raining down from the atmosphere.

Shortly after that I arrived home and I could see webs caught in the power lines that run east to west with the light just right. Decided to research on the internet and I found your [Dec. 2014] article on the same subject. The next day [Nov. 3, 2015] I noticed the webs were still coming down but more in strands than clumps. And looking around my property, the single strands could be seen on every tree branch.

After that I sent you an email with a picture of the largest sample I could find. I don’t know what this stuff is but l can tell you it’s not spider webs unless we have spiders dropping silk from thousands of feet above the earth. — John

Hope the ‘Men in Black’ don’t pay him a visit.

Let me know if they do okay John?

I just read your article on the Chem Webs in Ohio, and wanted to report that I saw a light flurry of them here in my area of East Tennessee on Tuesday morning.

I saw one up close, and touched it with my finger. It appeared to be exactly the same stuff that is shown in the photos in your article, and floated down out of the open sky during my morning walk outside on the street.

The more precise location is in Athens Tennessee which is on I-75 between Knoxville and Chattanooga in East Tennessee.

We have dark gray siding on our home.

I found something similar to the picture in your article on my siding. I brushed it off but really didn’t pay any attention as to the composition, thinking it was a cob web. I live East of Decatur, IN.  just 3 miles from the Ohio state line, directly West of Van Wert, Ohio.

This is a very interesting article — Rob

The following information was submitted to Intellihub via email Wednesday:

I was reading your article on the webs falling in Ohio. I happened to take some pictures last night and thought I would share them. They are not as abundant as what you showed in your article but are very evident. The photos were taken in Hancock County, rural Findlay, Ohio.

Feel free to email any information, pictures, or video on this subject to shepard@intellihub.com.