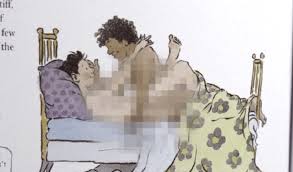 Developed mostly in the United States, Comprehensive Sexuality Education (CSE) is a highly controversial, ‘rights-based’ approach to sex education for children that details much more than just sexual intercourse and human reproduction. In the various publications and curricula there seems to be an obsession with sexual pleasure (The ‘It’s Perfectly Normal’ textbook aimed at 10-year-olds is filled with explicit sexual content and images). The American College of Pediatricians have denounced CSE as “a dangerous assault on the health and innocence of children…”.

CSE is heavily promoted by the United Nations and other big organizations. Exposing and explaining it can be quite difficult because there is not one universal definition of ‘comprehensive sexuality education’ and what it includes. Very often, inappropriate information and illustrations are surrounded by other information which is suitable, and the publications are usually disguised with suitable-sounding names such as ‘human rights education’, ‘gender equality education’, or ‘sexual and reproductive health education or information’.
On several occasions UN ambassadors have been manipulated into promoting CSE on the UN floor without knowing what the content of CSE programs actually teach. Afterwards they are shocked when they learn the perverted ideologies contained therein.

As early as 1999, UNICEF (United Nations Children’s Fund) was found to be promoting the ‘sexual pleasure agenda’ to pregnant teens in Mexico. The UNICEF-published sexual and reproductive health manual they used listed situations in which one can obtain sexual pleasure, including sexual responses directed towards inanimate objects, animals, minors and non-consenting persons (see below).

Image: An excerpt from a UNICEF-published sexual and reproductive health manual taught to pregnant teens in Mexico.

Government officials are increasingly being pressured at the United Nations and elsewhere to accept CSE without ever seeing the actual curricula or understanding its graphic nature.

Some of the influential organizations that promote CSE include UN agencies such as WHO (World Health Organization), UNAIDS, UNESCO, UNICEF and UNFPA. Other advocates include CDC (US Centers for Disease Control), IPPF (International Planned Parenthood Federation) and SIECUS (Sexuality Information and Education Council of the United States). Surprisingly, the World Association of Girl Guides and Girl Scouts also promote CSE.

One major factor driving the implementation of this perverted agenda around the world is the big business of abortion and other lucrative ‘sexual and reproductive health care services’. The early sexualization of children through CSE can create life-long paying customers for businesses such as Planned Parenthood.
Paid lobbyists of multi-million dollar organizations and businesses promote CSE at the UN and also at national and state legislatures in order to expand their ‘services’.

One particular CSE curriculum, ‘It’s All One’ (which also has a strange focus on sexual pleasure), has been in high demand since its launch at the UN several years ago, with requests for the program coming from every state in the US and from more than 150 countries across the world.

With CSE active in most countries around the world and typically being taught to children at the youngest of ages, often without the prior knowledge or consent of parents, we must do something to prevent children being exposed to this material.

To take action in defense of our children, you could begin by taking the time to watch the full 35-minute documentary ‘The War on Children: The Comprehensive Sexuality Education Agenda’. (It is well-made, very watchable and informative). In addition, you could also sign the petition to the UN to stop CSE at StopCSE.org. (Only your name and address are required and you will not receive unwanted emails).

Advocates of CSE programs claim that it reduces teen pregnancy and STD infections and that they do not sexualize children. But the bottom line is that this agenda is rooted in evil and is corrupting the minds of children with information and images that can never be erased.

We urge you to explore the information for yourself and come to your own conclusion. The future and well-being of children all across the globe is being compromised and it is happening before our eyes.