Facebook users have begun to receive creepy messages warning them that they ‘may have been exposed to extremist content’ and asking if they need support, as well as asking them to report anyone they know who ‘may be becoming an extremist’.

The warnings began popping up Thursday and have little indication of what the platform considers to be ‘extremist content’:

Encouraging people to turn in their friends, relatives and neighbors for wrong think, where have we heard about this before? On closer inspection, the warnings further link to a group that calls itself Life After Hate.

Our Mission – Life After Hate is committed to helping people leave the violent far-right to connect with humanity and lead compassionate lives.

Our Programs – Our primary goal is to interrupt violence committed in the name of ideological or religious beliefs. We do this through education, interventions, academic research, and outreach. Note that there is still no definition of what ‘violent far-right’ means, and there is no mention of any far-left hate groups, of which there are plenty. So, ok hate only exists on the right. And surely every woke leftist this message is sent to won’t use it against the conservative neighbour or colleague who merely disagrees with them.

You can see where this is heading. 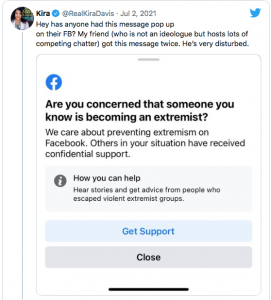 Facebook responded to questions about the alerts Thursday, issuing a statement that says “This test is part of our larger work to assess ways to provide resources and support to people on Facebook who may have engaged with or were exposed to extremist content, or may know someone who is at risk,”

“We are partnering with NGOs and academic experts in this space and hope to have more to share in the future,” the Facebook statement also read.

This group appears to be yet another like the Southern Poverty Law Center, a far left political entity masquerading as a bipartisan organisation with the express goal of silencing anyone who does not adhere to their warped outlook.

We shouldn’t be surprised, Facebook has been doing this for years already, first targeting and attempting to silence those who publicly engage in wrong think, and then going after everyone else.

As Pink Floyd legend Roger Waters recently noted, Facebook and Zuckerberg have an insatiable desire to “insidiously take over absolutely everything” and wipe out anyone or anything they cannot control.