The following post got me banned from facebook for 30 days, perhaps because the article discusses the fact that teenagers are connecting with pornography through facebook!!! Pornography pops up on their screen while they are trying to talk with their friends.

Of course, we all know that facebook is wholly controlled by Jews and that Jews totally control the pornography industry. They have used this Luciferian weapon to hijack the sexuality of young people, especially boys.

Jews have also mainstreamed circumcision in the U.S. — that is to say they have mainstreamed the sexual torture and genital mutilation of infants whose neurological wires will be imprinted with a connection between sex and violence because they were sexually tortured straight out of the womb.

All parents have a responsibility to address what is happening to the boys and understand who is behind this evil. At every turn, you will find it is THE JEWS.

Most of these children had just hit puberty and some were clearly still children: wide-eyed, nervous, with high-pitched voices.

Some of the girls were beginning their first forays into make-up. Several wore braces on their teeth. Everybody was smartly turned out in school uniform, and the most anti-authority statement in the room was a tie worn deliberately short. A One Direction pencil case lay on a desk. These were clearly good children, from good homes. So far, so very, very ordinary.

By the end of the hour-long class – and three others that followed with other children – I was profoundly saddened by what I had witnessed. While teenage boys will always be fascinated by, and curious about, sex, what’s now considered ‘normal’ by under-18s is an entirely distorted view of intercourse and the way relationships should be conducted.

One boy calmly recalled watching a scene too graphic to describe in a family newspaper, but which had involved an animal.

‘You’re watching bestiality?’ I asked. ‘That’s illegal. Where are you getting this stuff from?’

‘Facebook,’ the boy said. ‘It just pops up whether you want it or not, sometimes via advertisements. You don’t have any control over it.’ 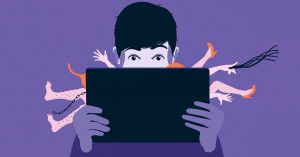 A girl added, ‘On Facebook, you just scroll down and it’s there. If any of your friends like it, it comes up on your home page.’

These kids were balanced, smart and savvy. They were the most academically gifted and sporting in the school. They came from ordinary, hard-working households. This was not ‘Broken Britain’.

Some were clearly shocked by what they had seen on the internet.

‘I find it dirty and disturbing,’ said one 15-year-old boy. ‘I try not to look at it, but people just keep sending it to each other. They email disgusting links to each other’s mobile phones to shock.’

One girl put her head in her hands and said, ‘It’s just gross’.

The reply was a chorus of tens, nines and one eight.

When I asked the children if there were parental controls on the internet at home, they all said no, their parents trusted them. They all admitted their parents had no idea what they were watching, and would be shocked if they did know.

What I saw at the school was awful, but sadly not unusual.

The findings were backed up in a survey of 80 boys and girls aged 12-16, commissioned for the TV show.

It proves the vast majority of UK teens have seen sexual imagery online, or pornographic films.

But what impact is this steady diet of online depravity having on the attitudes of boys and girls towards real life relationships, and on their self-esteem?

Could it even have a wider impact on their lives, blighting their ability to function in the world, get good qualifications and jobs?

What I discovered left me truly shocked and saddened.

I wanted to know what I could do to protect my own son from a seemingly inevitable exposure to hardcore material in just a few years’ time.

But what I saw during the making of the film changed my opinion of pornography forever.

And the looks of revulsion on those poor girl’s faces in the playground enraged me.

Was it having any effect at all? Could it be addictive?

We found Dr Valerie Voon, a neuroscientist at Cambridge University and a global authority on addiction.

She showed them a variety of images, both stills and videos.

The ways in which their brains responded to this diverse imagery were compared with the responses of a group of healthy volunteers.

She was interested in a particular brain region called the ventral striatum – the ‘reward centre’ – where our sense of pleasure is produced. This is one of the areas where an addict will show a heightened response to visual representations of their addiction – whether it’s a syringe or a bottle of vodka.

Everybody on the project was astounded, even Dr Voon, who admitted she had been ‘sceptical and ambivalent’ about the study at the outset.

And this toxic effect is filtering down directly into young girls’ lives.

The most shocking testament came from Professor Gail Dines. Regarded as the world’s leading anti-pornography campaigner, she has interviewed thousands of men and women about sex and pornography.

‘When you interview young women about their experiences of sex, you see an increased level of violence: rough, violent sex,’ she says.

‘Pornography is sexually traumatising an entire generation of boys.’

The brain’s reward centre is fully developed by the time we’re teenagers, but the part of the brain that regulates our urges – the pre-frontal cortex – isn’t fully developed until our mid-20s. The brains of teenagers are not wired to say ‘stop’, they are wired to want more. The implications of this study are profoundly troubling.

So who is going to take on the responsibility for protecting our children until they are old enough to do it for themselves?

Can we rely on schools? It strikes me that the current sex education system in the UK – where schools are obliged only to teach the basics of reproduction and the perils of sex, which they can opt out of anyway – is hopelessly outdated.

But our TV show proved that determined children will always find a way around online blocks.

Ultimately, the responsibility lies with us, the parents. The age of innocence is over.

Like many parents, I fear that my boy’s childhood could be taken away by pornography. So we have to fight back.

We have to tell our kids that pornographic sex is fake and real sex is about love, not lust.

By talking to them, they stand a chance. If we stick our head in the sand, we are fooling only ourselves.