…blame Iran as well as to jack up the price of oil?  But there’s much more to this plot!

Trump Administration Being Used By Israel to Wage War on Iran

“The global geopolitical chessboard is being stealthily
set up by the Neocons to trigger WW3. The Zionists are
determined to take out Iran.  They don’t even care that
Russia and China will not stand for it.  This false flag
drone attack on Saudi Arabia was an obvious attempt
to accuse Iran as a pretext to an American invasion.  Of
course, the price of oil will also spike as the CIA perps
planned.  The bottom line is that the warmongers have
a long-range plan that looks like: Market Crash, Dollar
Collapse & World War III

How many times do we need to watch these transparent false flags attacks executed by Israel, the United States and United Kingdom before they are exposed as juvenile attempts to start unprovoked wars of naked aggression?

Who doesn’t know by now that the Neocon Zionists are determined to start a war with Iran come hell or high water?  And, that they will use any false flag operation necessary to start that war.  That includes blowing up half of Saudi Arabia’s oil refining capacity.

This tribe of Neocon Zionist warmongers is totally insane—a cabal of criminally insane psychopaths to the extreme!  And false accuser and frontman Mike Pompeo does not even hold a candle to most of those Neocon warmongers.

This incorrigible tribe of Ashkenazi banksters will do whatever it takes to spike the price of oil as well—ANYTHING!  After all, it was their same Khazarian Mafia that pulled off the 9/11 false flag attacks in broad daylight. See: INDISPUTABLE EVIDENCE CONFIRMS: 9/11 was both an “Inside Job” and “Mossad Job”

KEY POINT: With the Israeli elections looming, PM Benjamin Netanyahu will do whatever it takes to steal the election.  He has promised to invade the defenseless Palestinians yet again, illegally annex more West Bank territory, among other harebrained campaign schemes.  However, this obvious false flag attack on Saudi Arabia just may produce the necessary chaos and insecurity for Israelis that they will re-elect their fear-mongering prime minister.  It’s always about: “Cui bono?”

The grim reality is that whenever Israel is holding a major election, the whole world gets drawn into their totally twisted and noxious melodrama.

Anything “BIG” that ever occurs in the Mideast is always driven by Israel’s hidden agenda known as the Greater Israel project (also known as Eretz Yisrael).  And its indisputable this incredibly brazen attack on Saudi Arabia advances that agenda considerably.

The very fact that this false flag attack was carried out right after hardcore Zionist and Israel Firster John Bolton was fired as NSA speaks volume about its true source and intent.  This series of bombings, whether they were conducted by way of drones, missiles, warplanes or planted bombs, was so sophisticated that it could only have been carried out by the US-Israel war machine.

It’s as though the unceremonious dumping of Bolton triggered the crazies in Tel Aviv, who then got to the Christian Zionists in Trump’s war cabinet, who then ordered the CIA-Mossad black ops department to get busy blowing up oil refineries.

It should also be noted that these attacks took place right after President Putin warned Netanyahu not to invade Syrian airspace lest Israel suffer major losses to their Air Force.  This warning from Russia was unusually stern and surely caused the utterly insane Israeli leadership to react in their typical irrationally dangerous way.  As follows:

The very fact that major Saudi oil assets were attacked so easily is also a study in Israeli-Saudi-American collusion.  It ought to lead any Mideast geopolitical analyst to the same conclusion.  That Israel and Saudi Arabia are truly joined at the hip as the exposés at this link clearly delineate: The House Of Saud: It’s Jewish Origin And Installation By The British Crown. 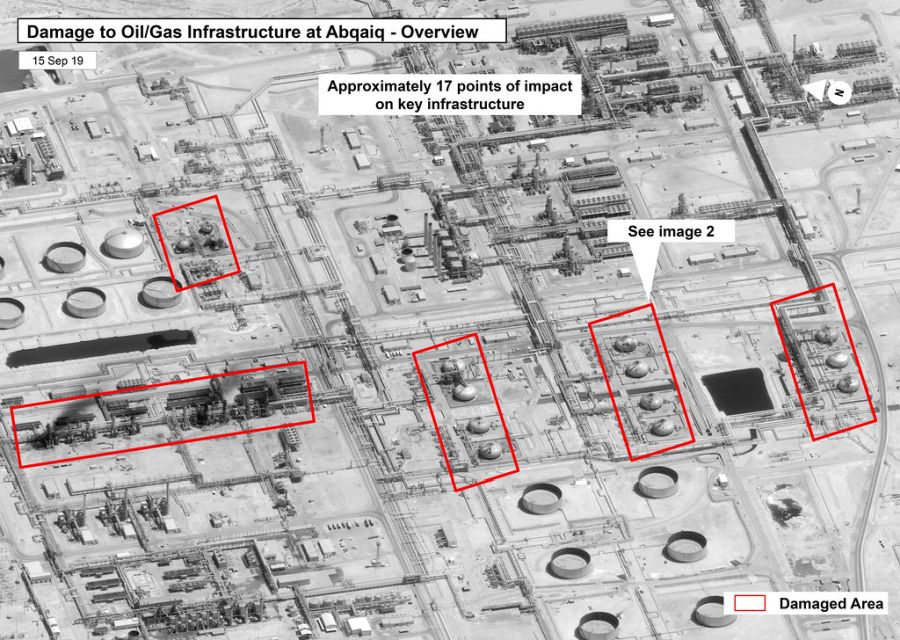 This image provided on Sunday, Sept. 15, 2019, by the U.S. government and DigitalGlobe and annotated by the source, shows damage to the infrastructure at Saudi Aramco’s Abaqaiq oil processing facility in Buqyaq, Saudi Arabia. The drone attack Saturday on Saudi Arabia’s Abqaiq plant and its Khurais oil field led to the interruption of an estimated 5.7 million barrels of the kingdom’s crude oil production per day, equivalent to more than 5% of the world’s daily supply. (U.S. government/Digital Globe via AP)

KEY POINT: The annotated map shown above clearly illustrates just how technically sophisticated this attack really was.  Given Saudi Arabian defense capabilities, the ill-equipped Houthis in Yemen could never have carried out such a complex operation.  To even suggest the possibility is quite ludicrous.  Similar to the 9/11 false flag attacks perpetrated by the same Zionist cabal, this terror operation is just another in a long line of black ops designed to endow Israel with complete domination of the Middle East.

The Trump administration has been cunningly stacked with Neocon warmongers since Inauguration Day 2017.

One day John Bolton is appointed, the next day he’s fired.  Now watch who he’s replaced with.  It will be another Zionist warmonger who is not so transparent in their absolute loyalty to the rogue nation and apartheid state of Israel as Bolton was.  Word is that Fred Fleitz, a Bolton loyalist and unabashed Muslim hater, will eventually be appointed as the new National Security Advisor.

Was Bolton fired to make room for another rabid Neocon Zionist and confirmed Muslim hater?

Until that perilous appointment occurs, the nation’s foreign policy is being led by one Mike Pompeo—a hardcore Christian Zionist and Evangelical End-time zealot.  Truly, it does not get more dangerous than that.

Lastly, it’s “9/11 anniversary” month, so the real perps do everything possible to distract the American people from the volumes of highly radioactive 9/11 Truth that’s now being disseminated WITH A VENGEANCE.  For example, there’s this little bombshell issued by a US government-funded entity: New WTC7 Controlled-Demolition Analysis Scientifically Proves 9/11 Terror Attacks Were a US Govt-sponsored, False Flag Operation and Inside Job.

CAVEAT: At the end of the day, all plots and conspiracies lead to the execution of Project Zyphyr.  Given that the Internet is now operating at full tilt where it concerns 9/11 Truth, the Patriot Movement has been targeted for total silencing.  However, that’s only the first phase of their furtive scheme to take away the guns before they push the button on Operation Zyphyr.

Comment posted at ZeroHedge.com about the hidden intentions of these false flag attacks on Saudi oil refineries:

Because it wasn’t Iran. It was a false flag intended to raise oil prices, provide cover for reduced Saudi oil production, put China at a disadvantage in the trade war due to higher oil prices, intimidate Iran, scare the Fed into going straight to ZIRP due to the fear of uncertainty.

The Saudis can now either cut production permanently or replace old capital equipment with something newer while reducing world oil production and raising prices while looking like victims.
(Source: China Slams Premature Blaming For Aramco Attack As US Hawks Argue “Military Action”)

Just when you thought the Saudi-Israeli-American false flag operation that just saw the KSA’s largest oil facility get bombed by an assortment of drones and missiles couldn’t get any more absurd, the kingdom’s Defense Ministry fabricates an even more outlandish deception implicating Iran.

Even when the whole world now knows that this brazen terrorist attack was perpetrated by the the usual suspects — the CIA-MI6-Mossad camarilla — the real perps in Tel Aviv, London and Washington, D.C. attempt to deceive the world community of nations with an even more ludicrous and totally implausible prevarication.

Does this incorrigible cabal of criminally insane psychopaths really believe anyone will buy their utterly ridiculous narrative?  As if the profound and widespread damage inflicted by 20 separate missiles and drones striking their targets with precision at the state-owned Saudi Aramco oil processing facilities at Abqaiq and Khurais in eastern Saudi Arabia could be sufficiently repaired so that their refining capacity would be restored by “the end of the month”.
(Source: ARAMCOgate: Just how stupid does Saudi Arabia think the rest of the world is?)