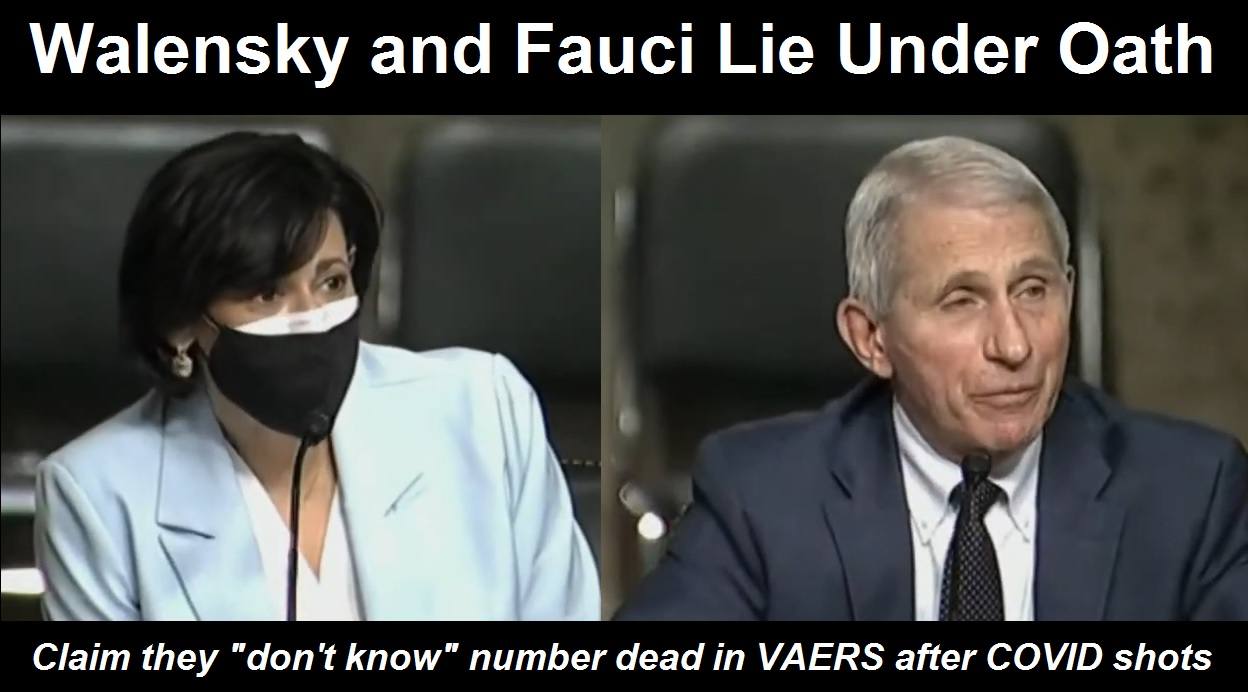 CDC Director Rochelle Walensky and Anthony Fauci appeared before a Senate Committee Hearing this week regarding the “Omicron Response,” and both of them lied under oath.

Alabama Senator Tommy Tuberville either displayed his complete ignorance regarding VAERS, or colluded with Walensky and Fauci to ask them a meaningless question which then gave them the opportunity to control the narrative.

Dr. Walensky, it has been reported by some virologists and scientists that this year around 170 people have died from taking the regular flu vaccine.

The Vaccine Adverse Reporting System reported that the number of people dying after or following the COVID vaccine is actually in the thousands.

Now this is what I am hearing. I’ll give you a chance to refute that or confirm it here. Is this true?

Are we having that many people die after taking one of these vaccines?

This is a meaningless question because the answer is already public knowledge!

The VAERS database is open to the public, and anybody can search it. You don’t need a “virologist” or “scientist” to tell you how many deaths there are following COVID-19 shots. Anyone can make that search, and it takes less than 60 seconds to find the answer.

As of this recorded Senate Hearing, the total deaths following COVID-19 shots in VAERS was 21,382. (Source.)

So what he should have asked was:

Why are we still injecting these experimental products into Americans?

But instead, he questioned whether or not VAERS was actually reporting this, which led to a canned response by both Walensky and Fauci that VAERS is not reliable, because someone can get the vaccine and then walk outside and get hit by a car, and that is recorded as a vaccine death.

Here is the clip from our Bitchute channel (also available on our Telegram channel for easy download):

So let’s fact check this new narrative that people getting hit by a car after getting a COVID-19 shot are being entered into VAERS.

VAERS does have a “symptom” that is called “Road traffic accident.”

Of the remaining 18, it appears that most, if not all of them, happened with the person driving the car (or motorcycle), not being hit by a car.

She started having breathing problems/heart attack appearance. on 1/22/21 and went to the ER. Upon admittance was told it was an anaphylactic shock from the Covid shot. They kept her in ICU and released her 1/23/21. At 12:45 am on 1/24/21 she passed out and we called the ambulance. Hospital admitted her and worked through multiple organ failure issues and thought her numbers were under control. She was released on 1/27/21 and was driving on 1/28/21 around 4:15 pm and appears to have had heart failure and had a wreck. She passed away that day.

People having heart attacks while driving their vehicles shortly after getting injected and then crashing doesn’t quite fit the new narrative that Walensky and Fauci are claiming regarding “getting hit by a car,” does it?

Everyone in the U.S. Federal Government is Now Guilty of Being an Accessory to Mass Murder

Senator Tommy Tuberville and all of his colleagues in the U.S. Senate and the U.S. House are now complicit with mass murder, for not acting to arrest these criminals and force them to face charges.

Senator Rand Paul has been the most vocal against Anthony Fauci, claiming that Fauci is responsible for thousands of deaths.

He recently appeared on his father’s Ron Paul Liberty Report show, where he stated that he would bring Fauci to justice if the GOP wins back the Senate. (Source.)

Really Rand? You admit that Fauci is guilty of mass murder, but you will only act to bring him to justice if the GOP wins back the Senate when you can head a Senate Committee where you can shame him publicly and further your own political career, but until then he is free to go on murdering people through his policies?

What a joke! With both Ron Paul and Rand Paul being medical doctors, I doubt they have any intention of taking on the Big Pharma cartel, and both of them have stated in the past that they are pro-vaccine, just not pro-COVID19 vaccines.

Politicians are the problem, not the solution.