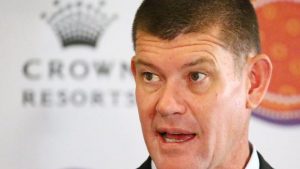 Midway through the election campaign Malcolm Turnbull had waited his life to run, the Liberal Party was running short on cash.

Disorganised and desperate for funds, senior Liberals hit up billionaire James Packer for an 11th-hour donation.

Embarrassingly, it was not the first approach the gaming mogul had received. He had been asked to donate before the campaign and during it, both by party leaders and individual candidates.

There was no co-ordination to ensure one of Australia’s most influential businessmen, who was recently ranked in the top 100 most powerful people in Hollywood, was not asked for money multiple times. It is not known whether Mr Packer agreed to ­donate.

Other major donors — some of Australia’s leading business people — were also approached for ­urgent donations, when the campaign was well under way.

The NSW division, financially depleted after the 2015 state election, began the federal campaign with only half a million dollars in the bank. It needed $5 million to run a federal campaign

To make matters worse, Turnbull knocked back many fundraisers, advising the party that he preferred lunchtime fundraisers.

The campaign wasn’t just struggling financially, it was proving to be dysfunctional.

State directors were sidelined, allegedly unable to do their jobs properly as they were not kept in the loop with research and polling data. The polling was tightly held by pollster Mark Textor and Federal Director Tony Nutt, who would, in early morning hook-ups with the state directors, give them the “learnings” from the research.

The directors were told to follow instructions and not to question his strategy. In the aftermath of the election, the states are understood to be furious at Nutt for withholding polling and research data from them.

While Labor had known which seats to target, with doorknocking, emails, texts and call centres, and ran highly localised campaigns, the Liberals had little idea because they did not have detailed access to seat-by-seat polling.

NSW wouldn’t have directed money into Werriwa and instead would have sandbagged Lindsay, Macarthur, Macquarie and Gilmore.

Queensland would have poured more resources into Longman, and would not have spent as much in the seat of Brisbane.

The one key seat list that was circulated in CHQ was simply a list of seats with a margin of less than five per cent.

“That list should have been fluid and Longman should have appeared on that list in the last 10 days of the campaign,” one source said.

Amateur and inexperience are words that emerge frequently when discussing the campaign with senior party figures. It was Nutt’s first campaign since taking over from Brian Loughnane. The party’s treasurer Philip Higginson was gone, with Andrew Burnes new to the role. All of the state directors were also new to their jobs, except for Tasmania’s Sam McQuestin.

The venue for the campaign launch was still not secured on the Wednesday beforehand. “It was all tentative,” one source said, pointing out that in 2013 the venue was confirmed before the campaign had started. Brutally, more than one source has suggested Nutt dusted off a campaign from 1996 — when he was Liberal Party state director and federal director was Andrew Robb — saying it lacked Labor’s energy, innovation and strategy.

At CHQ there was, in turn, frustration that Malcolm Turnbull was not listening to the advice of pollster Mark Textor, who ran successful campaigns for Boris Johnson and David Cameron, and Nutt — favouring that of his travelling team, Sally Cray, Brad Burke and other new confidants like Scott Ryan and James McGrath, and, to a lesser extent, Mitch Fifield and Kelly O’Dwyer.

“Do you think Textor and Nutt would have agreed that science and innovation was the most throbbing issue affecting the country? Do you think Textor’s research showed that start-ups and incubators were a big issue in western Sydney?”

Experienced heads are said to have urged Turnbull to take ­urgent action on Labor’s Mediscare campaign. From the start, it was clear that it was biting.

But, misreading the potency of the campaign, the feedback to CHQ was to stop overreacting, it was just “silly old Bob”, and there was no need to panic.

It was days before a co-ordinated response was rolled out.

“There was clearly a disconnect between Textor and Malcolm’s coterie. Malcolm’s core group didn’t think it (Medicare) was a big problem early on,” a senior party source said.

Another source said there was a “dual issue” where “he advice being given was bad but also Malcolm and his core team in PMO weren’t really caring about the advice they were being given anyway.”

The campaign was described as a repeat of the Rudd/Hawker 2013 campaign where the road team was divorced from the CHQ team.

All along Turnbull adopted a relaxed attitude. He is being criticised by senior party figures for ambling during the campaign, for not being hungry.

An average day from Abbott’s 2013 campaign shows it would start at 5.30am and often finish late into the night, between 8.30 and 11pm. By contrast, Mr Turnbull’s campaigning started later in the day, often around 8am, and finished not long after midday.

Internally, his message was to focus on the “highest and best use of his time events.”

Mr Turnbull’s senior staff were unable to get him to pick up the pace, which further slowed in the final weeks of the election when he was unwell.